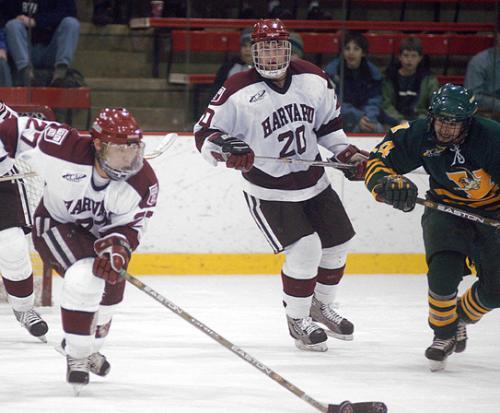 Harvard had Vermont beaten by the second period buzzer. The Crimson then spent much of the third period trying to beat itself.

Junior Dennis Packard just wouldn’t let it happen. His first-ever hat trick was just enough for Harvard to hold off Vermont, 4-2, in Game 1 of their best-of-three ECAC quarterfinal series Friday night. Yet Packard’s performance was overshadowed by a game-long parade to the penalty box that left neither team satisfied with its performance.

“We were rusty [Friday], and we haven’t played for two weeks,” said captain Dominic Moore, referring to Harvard’s bye last weekend. “I thought we were a little sloppy at times, and the penalties we took allowed them to get back in the game.”

Harvard coach Mark Mazzoleni was more critical of his team immediately after the game than he is after most losses. He ripped into his players for taking numerous “unnecessary” penalties—including six in the third period—that allowed the Catamounts to turn a 3-0 deficit into a 3-2 nail-biter with a pair of power-play goals.

“We allowed them to get back due to our lack of discipline. You’re not going to go real far if you play like that,” Mazzoleni said. “You’ve got to respect the margin of having your season go down the tubes versus advancing. That should be enough motivation in itself in my book.

“What do I do? Should I sit people tomorrow when you’re playing to advance? At this time of the season they’ve got to take responsibility on their shoulders.”

Most of Harvard’s penalties were retaliation calls, as a desperate Vermont squad turned to rough, scrappy play in its attempt to climb back into the game.

“It’s not the reffing. It’s just discipline,” Moore said. “They start a lot of the scrums and after the scrum is over our guys would get pulled out and thrown into the box. We were doing a little too much aggressive tactics in there as opposed to just walking away, which is what we should have done.”

Harvard was not the only team with penalty problems. The Crimson took advantage of a power play to open up the scoring just 3:41 into the game on a goal by junior Kenny Turano, and early on it looked like Harvard would blow out the Catamounts.

But Vermont played tight defensively at even strength, largely denying the more skilled Harvard forwards odd-man rushes and prime scoring opportunities. All the effort was wasted, however, when the Catamounts took another penalty, this one 13:32 into the second period. A minute later, Packard had his first goal and the Crimson was up 2-0.

“Our penalty kill has not been strong all year long,” Vermont coach Mike Gilligan said. “They took every advantage of our unnecessary penalties. We did not do what I told our guys to do until the third period.”

Still, Vermont was about two inches away from ending the second period with momentum on its side. Down 2-0, Catamount forward Jeff Miles caught Harvard sophomore goaltender Dov Grumet-Morris away from his net as the clock wound down. Miles scooted the puck behind Grumet-Morris, but it barely missed the far post.

Seconds later, it was 3-0 Harvard. Packard collected a pinpoint floater from Turano, walked in all alone and beat Conschafter over his pad five seconds before intermission.

Packard’s third goal, coming at 13:15 of the third, cut short Vermont’s late rally and put the game out of reach. For Packard, the hat trick was the perfect remedy for a season of frustration. Packard had struggled since breaking his hand in December, scoring just twice since the injury despite playing on Harvard’s top line.

“Breaking my hand in December was tough, but I’ve been feeling great the last month, and building my confidence in practice and games,” Packard said.

—Staff writer Elijah M. Alper can be reached at alper@fas.harvard.edu.