W. Hoops Headed to Kansas as No. 14 Seed 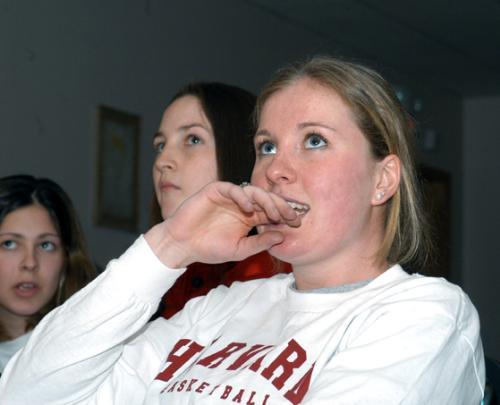 The jovial mood of the Harvard women’s basketball team was muted the moment it saw its name appear alongside Kansas State’s on the NCAA selection show at Donohue’s in Watertown yesterday. The Crimson had received a No. 14 seed, well short of its expectations.

The disappointed silence was interrupted by Harvard coach Kathy Delaney-Smith, who remarked that the Wildcats will provide a great matchup.

“From a purely basketball standpoint this is great,” Delaney-Smith said later in the evening. “I’m happier this year than I was last year.”

The tournament appearance and Ivy championship are Harvard’s fifth in eight years. Last season, the Crimson—a No. 13 seed—fell 85-58 to No. 4 seed North Carolina.

“I felt North Carolina was a [worse] matchup given our guards, their guards and their height,” Delaney-Smith said. “But we were so excited to be there. A 13 seed was fabulous. It showed a little respect.”

That was not the case this year. The No. 14 seed places Harvard at third-seeded Kansas State, which is ranked No. 7 nationally. The game will be the second of a Sunday doubleheader, after the contest between No. 6 seed Arizona and No. 11 seed Notre Dame.

“I think everyone’s a little disappointed with the seed,” junior Tricia Tubridy said. “We all thought that we were better than a 14 seed.”

Holy Cross did not do as much to distinguish itself from Harvard. The Crusaders lost nearly twice as many games (seven) as the Crimson (four). Holy Cross didn’t beat a single NCAA tournament team and its best wins were over Siena and Vermont. Harvard beat two NCAA tournament teams—Manhattan, which won Siena’s conference, and Boston University, which won Vermont’s conference despite losing twice to the Catamounts. The Crusaders’ conference (the Patriot League) had a lower RPI than the Ivy League, and Holy Cross did not go undefeated in its conference like Harvard did.

The Crusaders did, however, lose to Boston College by 18 and to Vanderbilt by 32. Harvard fell to the Eagles by 39 and to the Commodores by 40.

“The scores of those games must have come back to haunt us,” Delaney-Smith said.

The disappointment over the seeding quickly turned to confidence regarding the matchup. The Crimson played at Kansas State a year ago and lost 72-56, although junior two-time Ivy League Player of the Year Hana Peljto missed the game.

“I know they’re a better team, but so are we,” Delaney-Smith said.

“It was a really well-played, good ballgame,” she added. “I don’t feel they did anything on the floor so that we couldn’t get the shots we wanted. I think we have the ability to adjust to whatever they do to us.”

Tubridy did not think Kansas State was going to be able to win with its athleticism.

“We’ve been there and we know how they play,” Tubridy added. “Their style of play we know we can defend and stop.”

In Harvard’s four previous games against nationally-ranked competition, the Crimson lost by a total of 142 points. Delaney-Smith said she is certain Harvard will perform better this weekend.

“We were a little bit injured, a little bit young or a little bit disconnected and we played without enough confidence in those games,” Delaney-Smith said. “That will not happen to us against Kansas State. I don’t think we’ll be surprised by height or speed or depth or anything.”