One Thousand Leave Classes In Protest 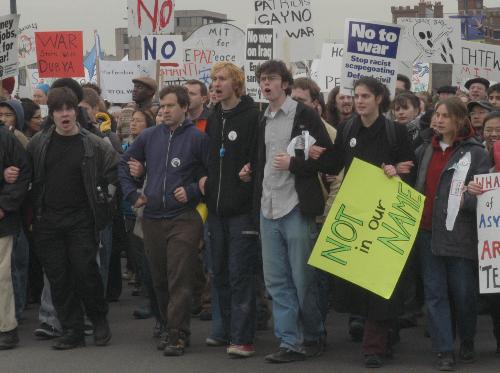 Fourteen hours after President Bush sounded the drums of war on Iraq, more than a thousand Harvard students countered by beating bongos for peace in a massive march down Mass. Ave. to downtown Boston yesterday.

In a mass exodus from class at 12:30 p.m., Harvard students and professors kicked off a rally, decrying the Bush administration’s attack on Iraq with speeches and live music.

The crowd joined Cambridge residents and students from local colleges in a two-block-long parade of several thousands that wended its way from Harvard Yard to the Government Center plaza.

The protest was the second largest in Harvard’s history—exceeded in size only by demonstrations that met Chinese President Jiang Zemin in 1997—and represented the first major response of Harvard students to the war.

The protest began at 12:30 p.m., when hundreds of students poured out of classrooms and into the Yard, joining a crowd in the shadow of University Hall.

In impassioned speeches, undergraduates denounced the onset of military action in Iraq as a band played rock-and-roll music.

Over the course of the day, the protesters—some laden with pamphlets and posters, some limping on crutches—moved from Cambridge to Boston, pausing for almost half an hour on the Harvard Bridge to sit and to dance as helicopters hovered overhead and a drum team from MIT beat syncopated rhythms and swayed on the asphalt.

Michael J. Getlin ’05, who spoke at the rally in the Yard yesterday, said he had applied to be in the Marines, but had withdrawn his application on Wednesday when he heard of the impending attack on Iraq—even though his father and uncle had both earned Navy decorations in Vietnam.

“I realized it represents a trajectory for our foreign policy of which I will take no part,” he said. “It is an effort that will alienate our country from the global community that we have worked so hard to create.”

Matthew R. Skomarovsky ’03—a member of the Harvard Initiative for Peace and Justice (HIPJ), an anti-war group which organized the rally—said that hundreds more students and locals showed up than had originally signed up for the protest.

“It really showed that Harvard cares about what’s going on in the rest of the world,” said Regina C. Schwartz ’06, who attended the protest. “It shows that we’re not apathetic.”

But not everyone assembled in the Yard championed an anti-war viewpoint.

A small group of students formed an informal counter-protest as they stood waving United States flags in front of Thayer Hall on the periphery of the sea of anti-war protesters that filled half of the Yard.

Many of the students who attended took great pains to be there.

Several large lecture classes, such as Science A-35: “Matter in the Universe,” had midterms slated for the noon hour.

But many faculty members—including A-35 Professor and Quincy House Master Robert P. Kirshner ’70—offered their students an alternative exam time so students could attend the peace protest.

Several professors who were holding midterms during the hour allowed their students to reschedule their tests so that they could participate in the walkout.

Cabot Professor of Aesthetics and the General Theory of Value Elaine Scarry offered her students in English 151: “The 19th Century Novel” the option of taking their midterm—originally scheduled during the protest time—at three different times during the day.

Scarry, who suggested that military intervention in Iraq better matched “the model of torture than the model of war” in a speech at the rally, said she did not want her students to be punished academically because of their political beliefs.

“These students are actually doing something harder because they have less time to study,” Scarry said.

Nearly 150 members of the faculty signed a statement against waging war on Iraq, and some spoke out against the war at the rally in front of a teeming crowd.

“Education means nothing if we your teachers cannot stand with you in solidarity and practice what we preach,” said Lecturer in History and Literature Tim McCarthy ’93, who skipped teaching English 176a: “American Protest Literature” with Associate Professor of English John Stauffer yesterday. “America is what it is because of those who have been encouraged to challenge the status quo.”

Cambridge resident James Williamson, who participated in Vietnam protests more than three decades ago, said the turnout of Harvard members inspired him.

“It’s really moving to me that there are this many young people,” he said, on the verge of tears. “People here have chosen they’re not just going to be spectators.”