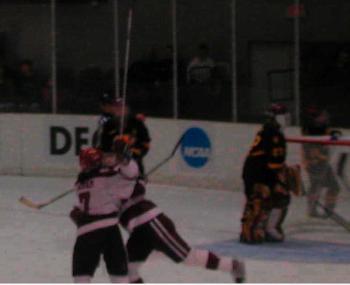 Though the teams were relatively even through most of the first period, a pair of late Harvard goals—separated by just 23 seconds—set the tone for the rest of the game. In the second period, late Crimson goals would put the game out of reach, while in the third, late Harvard goals were nails in the coffin. With the win, the Crimson avenged its 4-3 loss to Minnesota (27-7-1) in November.

Harvard struck first with barely a minute left in the opening period. Breaking out of the neutral zone, Crimson captain Jennifer Botterill approached goal from the right side and fired a shot from just past the blue line. The rebound went off a defender’s skate directly to freshman winger Julie Chu, who backhanded it in for the score.

Junior winger Lauren McAuliffe doubled the lead right off the subsequent faceoff. She brought the puck in on the left side on a two-on-one with sophomore winger Nicole Corriero. McAuliffe delayed for a split second, faking the pass. As Minnesota goaltender Judy Horak turned her attention to Corriero, McAuliffe scored with a beautiful shot just over Horak’s right shoulder. The two goals demoralized the Gophers.

“I thought we started off strong and had a good first period,” said Minnesota coach Laura Halldorson. “Too bad we couldn’t bury one early because maybe it would have turned out a little differently. Those two goals they scored at the end of the period made a big difference in the momentum of the game and it’s hard catching up after that.”

Minnesota is a small, quick team that relies on speed to win, but the Crimson beat the Gophers to the puck consistently. In addition, the Crimson was able to slow the Gophers' pace while avoiding penalties.

“When you’re up a couple of goals, your legs feel a lot lighter,” said junior captain Angela Ruggiero. “We went back into the locker room with a lot of energy.”

The Crimson forechecked relentlessly, keeping the puck in the offensive zone for much of the game. Harvard junior goaltender Jessica Ruddock was solid in net, making 17 saves.

“I didn’t really feel relaxed out there. I felt intense throughout my body,” Ruddock said. “I was definitely feeling confident, especially since my defense was playing really well this weekend. We proved today why we’re the best defensive team in the country.”

Though Harvard dominated the second period, it nonetheless waited until late in the frame to increase its lead.

A smart play by Chu provided Harvard’s third goal of the game at 13:25 of the second period. Sophomore defender Ashley Banfield passed the puck to fellow defender and captain Jamie Hagerman, who rifled a shot left of the goal. The force of Hagerman’s shot off the boards brought the puck to Chu, who pulled it in front and poked it by Horak to light the lamp.

Once again, the Crimson scored with under a minute to play in the period. Chu passed the puck to Ruggiero and then followed her captain for a two-on-one. Ruggiero held on to the puck and went to the right of the goal before finally trying to center the puck, but her pass never made it to Chu—it went off the back of Horak’s legs and it to the net.

After the fourth goal, Minnesota could not find the energy to compete. The third period was significantly slower than the previous two, with Harvard firing only six shots and Minnesota managing just five.

The Gophers finally broke through midway through the third period, notching their only goal of the game on a controversial play. Gopher freshman Natalie Darwitz poked the puck towards Ruddock and then dove into the net, knocking it off its mooring. After reviewing the play on tape, the refs awarded Darwitz a goal, concluding that the puck had crossed the goal line before the net was dislodged.

But the goal did not energize the Gophers. Harvard continued to dominate, and when Minnesota emptied its net, Ruggiero promptly filled it with the puck at 16:42 of the third.

With two minutes left in the game, Chu and junior linemate Tracy Catlin broke in on a two-on-none. Chu took the puck all the way to the crease before sending a quick, short pass to Catlin, who roofed it over Horak and into the goal.

For the game, Harvard outshot Minnesota 32-18. Harvard coach Katey Stone thought the defense was the difference.

“We did score six goals, but ultimately, we dominated the game defensively,” Stone said. “We got the kind of goaltending we wanted from our goaltender all the way up and we played real responsible in our defensive end. It was all about the one-on-one battles and we won those today.”

The Crimson will face two-time defending national champion and No. 1 Minnesota-Duluth in Sunday’s final. The tournament host Bulldogs defeated Dartmouth 5-2 yesterday in the other semifinal. Harvard beat Duluth 2-1 in November.

The Crimson won its only other appearance in the national championship game in 1999.