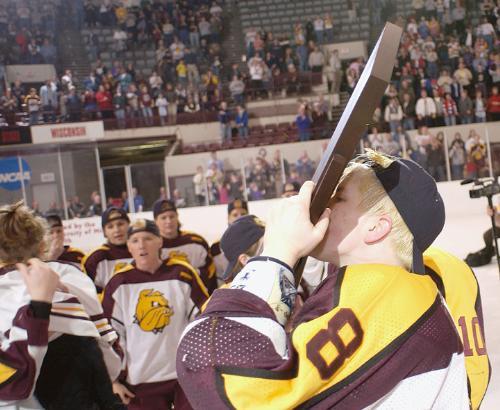 Duluth's ERIKA HOLST, who assisted on the game-winner, kisses the NCAA title plaque.
By David R. De remer and David Weinfeld, SPECIAL TO THE CRIMSONs

DULUTH, Minn.—Harvard captain Jennifer Botterill of Canada, junior captain Angela Ruggiero and freshman Julie Chu of the United States were all scheduled to compete for their respective nations in China for the women’s world championships from Thursday to April 9, but due to health concerns, the event was cancelled yesterday.

The International Ice Hockey Federation (IIHF) said that health risks caused by Severe Acute Respiratory Syndrome (SARS) had worsened in Beijing over the course of the week to the point where cancellation was the only responsible decision. The IIHF said it would decide soon whether to conduct the championship at a later date.

Five teams had already arrived in China, but the American, Canadian and Finnish teams continually delayed their departures prior to the cancellation.

Botterill flew to Calgary with four other college hockey players the day after the NCAA championships to train with the Canadian national team.

“I am hugely concerned, and I think quite a few of us on the team are,” Botterill told the Winnipeg Sun earlier in the week. “Playing hockey for your country, representing Canada—it’s hugely important to all of us athletes. But at the same time, in the grand scheme of things, it is just a game of hockey.”

Botterill was not the only member of her family affected by a SARS scare. Her brother Jason, who plays for the NHL’s Buffalo Sabres, saw two of his teammates isolated due to exposure earlier this week.

The Hosts with the Most

The organization of this year’s Frozen Four, which more than doubled the two-session attendance record, received rave reviews.

“The NCAA has done a tremendous job sponsoring the Frozen Four and making it a wonderful experience for the student-athlete,” said Harvard coach Katey Stone.

The Duluth Entertainment and Convention Center (DECC) made for a convenient venue with several hotels connecting to it via skywalks. Located on the cusp of Lake Superior, the DECC provided large ballrooms with harborside views for the tournament banquets.

“They put on a show with the banquets and with the crowds we had,” Ruggiero said. “It felt like a professional event, very similar to the world championships.”

Stone called the Frozen Four a tribute to the hard work of the student-athletes and the great product they can present to the public. The Ivy League’s Carolyn Campbell-McGovern, chair of the NCAA women’s hockey committee, gave Stone a rosy projection of putting 12,000 people into Providence’s Dunkin’ Donuts Center for next year’s Women’s Frozen Four.

“I’m gonna hold her to it because we’re going to do everything we can to get back here,” Stone said.

The Crimson will have plenty of work to do in the offseason if it expects to contend for the national championship next year.

“We’re going to miss them. They are a huge chunk of our leadership,” Ruggiero said. “The players we have and our recruits will step up, but there’s a huge a huge void to fill.”

To reach the final, UMD beat Dartmouth 5-2 on March 21. The Crimson players watched some of that game after their 6-1 win over Minnesota, and the Bulldogs’ celebrations drew the ire of some of Harvard’s skaters.

The Duluth players acted as though they had already won the national championship after they scored their first goal against Dartmouth, throwing their sticks to the ice and piling on the ice.

“Our team doesn’t throw our stick down or jump against the boards,” Ruggiero said prior to the championship game. “It’s not about being flamboyant after scoring a goal. It’s about getting the job done. Maybe I’ll say something to the refs like ‘keep the celebrations down.’”

Harvard junior goaltender Jessica Ruddock was even more adamant in voicing her displeasure.

“They should get penalties for that,” Ruddock said. “It’s unsportsmanlike. We’re not that kind of team—we have integrity and class. I care about hockey. I care about the way [the game] comes across. When they throw their sticks down or pile up after the first goal of the game, I think that it’s arrogant and that’s not the kind of team we are.”

“Every goal has a huge potential to be the game-winner so of course we’re all going to be excited because of it,” Rooth said.