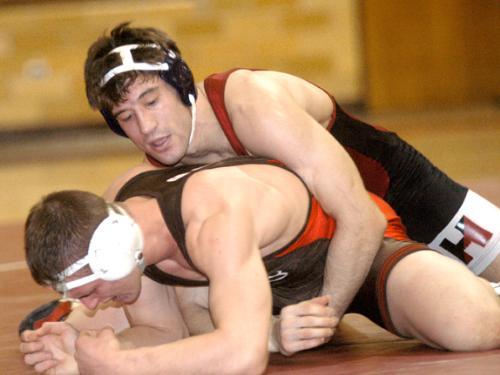 Only for a wrestler as talented as Jesse Jantzen can a third-place finish at the NCAAs be a disappointment.

In Kansas City, Mo. on March 21, the 149-pound Crimson junior lost in the NCAA semifinals for the second consecutive year, dropping a 7-2 decision to Minnesota senior Jared Lawrence. The next day, Jantzen won both his wrestle-back matches to finish third.

Senior Pat O’Donnell, Harvard’s other NCAA participant, closed out his career with an admirable performance. The 174-pounder—who had lost his first tourney match to Buffalo’s Gary Cooper 10-9 in overtime—won three consolation matches, including a 4-3 win over No. 5 Tyler Nixt of Iowa. O’Donnell ended his collegiate career with a tough 7-2 loss to Appalachian State’s Mark Fee.

For No. 3 Jantzen, the loss to No. 2 Lawrence was only his second of the season. The other came in Las Vegas to eventual NCAA champion Eric Larkin of Arizona State.

Both Lawrence and Larkin are seniors.

“[Jantzen’s] right there,” Harvard coach Jay Weiss said. “He’ll have his time. He deserves it.”

“Right when the whistle blew, he was on him quicker than anything,” Weiss said. “I knew I had nothing to worry about.”

Jantzen, who could not be reached for comment, may have another crack at his two nemeses in the upcoming US open tournament in May.

O’Donnell, on the other hand, was able to get some revenge at the NCAA tournament. In his first wrestle-back, he defeated Wisconsin’s Brady Reinke 15-9. Reinke had taken O’Donnell to overtime earlier this season. After downing Nixt, O’Donnell pinned Nebraska’s Travis Pascoe, who had beaten him 11-5 in Las Vegas in November.

“Pat saved his best for last,” Weiss said. “He knows he gave it his all. That’s a good way to go out.”

Indeed, O’Donnell’s presence in the NCAAs was an accomplishment in its own right, as he overcame disappointing performances early in the season.

“I had a lot of rough spots this past year. Earlier in the season, I was humbled,” O’Donnell said, referring to disappointing finishes in the Cliff Keen and Lone Star tournaments before Christmas.

“I was depending too much on myself,” O’Donnell said. “I wasn’t trusting in the Lord. I was relying on my own strength, and I know better than that. Once I let the Lord take over, that allowed me to fill my body with the spirit of the Lord. I was wrestling with God’s strength, not my own.”

O’Donnell attributes his turnaround, which included a fine performance in the EIWAs, to his renewed devotion.

“Earlier this season, I didn’t have the fire,” O’Donnell said. “I wasn’t into it. I had been wrestling for myself. Once I started wrestling for something other than myself—for God—then I started having success.”

“Before every match, I prayed. I prayed for my health, and for my opponent’s health. I prayed that my match can be glorifying to God. I live my life to glorify God, and that includes wrestling,” O’Donnell added.

O’Donnell was also adamant about thanking his teammates and coaches, particularly Weiss.

“He’s been more than a coach to me,” O’Donnell said. “He’s been like a father away from home.”