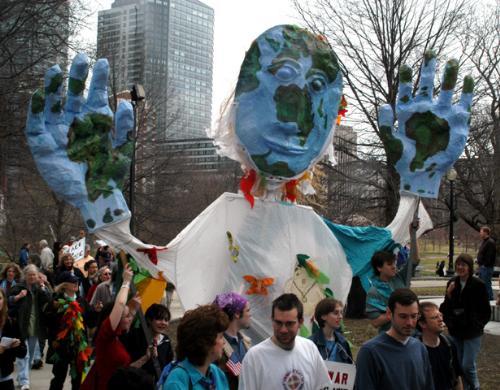 Dozens of Harvard students joined protestors in waving signs and puppets to oppose the war in Iraq on Boston Common Saturday. The rally was the city’s largest since the Vietnam War.
By Rebecca D. O’brien, Crimson Staff Writer

With anti-war protests springing up across the globe, tens of thousands gathered on Boston Common Saturday in the largest anti-war protest in the city since the Vietnam War.

Although most Harvard students were away for spring break, several dozen made a showing at the rally, coming both in groups and on their own.

Student supporters of the war were more low key in their efforts—while some may have attended the smaller pro-war rallies that dotted the Boston area and the nation, there was no organized Harvard contingent.

Encouraged by the turnout at their walk-out on the war’s first day that drew a crowd of about 1,200 students and professors, the Harvard Initiative for Peace and Justice (HIPJ) worked during break to publicize Saturday’s protest.

“We sent out e-mails, but since nobody is really around for spring break, there was really a limit to what we could do,” said Matthew Skomarovski ’03, a member of HIPJ. “But that in no way detracted from the event: it was enormous.”

Many colleges were represented at the protest, but the varied crowd also included young students, grandparents, nuns and whole families.

The event began with an hour of speeches and music before the crowd of 25,000 took to the streets of Boston for a march that lasted most of the warm afternoon.

“It was a really diverse crowd,” said HIPJ member Jesse Stellato. “It was festive and loud.”

In a “die-in” on Boston’s Boylston Street, hundreds of protesters lay down on the pavement to symbolize the victims of war.

In addition to the HIPJ presence, the protest drew other Harvard students not formally aligned with campus political organizations.

Michael A. Gee ’03, who attended the protest, said that it was his second march and that he had not even decided how he felt about the war until recently.

“I went to the Harvard walk-out leaning towards anti-war,” Gee said. “I heard of a lot of arguments that really made sense, and I guess it got me thinking a lot more about the issues.”

On the other end of the political spectrum, those in favor of the war spent break brainstorming ways to make their presence felt in more subtle ways.

“As of right now, we have not planned on attending or hosting rallies,” said Mark Silvestri, secretary and spokesperson for the Harvard Republican Club (HRC). “In war, things are very fluid—we will see how things change and see what seems to be the most pertinent way to make a difference on campus and with the troops.”

Starting this week, HRC will be distributing American flag pins in front of the Science Center and signing postcards to be sent to the troops.

Silvestri said that, as far as he knew, no HRC members had attended any pro-war rallies over break. On Saturday, 2,000 people attended a rally on Cape Cod in support of troops.

“At this point, we stand with the president’s decisions, we trust him and his administration,” Silvestri said. “So far, I have heard very few rational, logical arguments from the anti-war side—just one line slogans that have no backing. I am very eager to hear clear thoughts through debates.”

Silvestri said HRC’s plans might include inviting speakers to campus and sponsoring debates.

—Staff Writer Rebecca D. O’Brien can be reached at robrien@fas.harvard.edu.