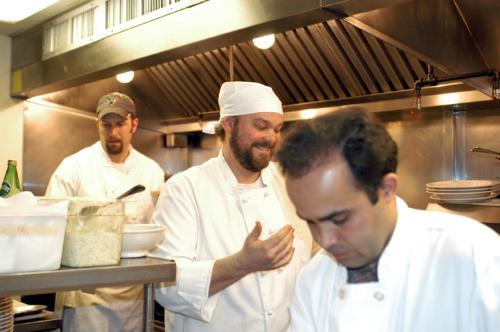 Despite its consciously minimalist name, Chef Gary Strack’s Enormous Room is more than the new trendy restaurant on the block.
By Seth H. Robinson

Despite its consciously minimalist name, Chef Gary Strack’s Enormous Room is more than the new trendy restaurant on the block. With decor inspired by travels through North Africa, frequent performances by area artists and a menu that offers only two choices—“regular” or “vegetarian”—Enormous Room has a style as off-beat as its founder.

Strack, a graduate of the Graduate School of Education, is the co-owner and head chef of Central Kitchen, the two-story Central Square eatery whose top floor is occupied by Enormous Room. A native of legendary Venice Beach, Strack retains his Southern California sunshine style in the face of dreary Cambridge rain. Wearing a gray Kangol cap, an off-white, time-worn sweater and blue pants, his look is as trendy as his clientele. After graduating from Pomona College with a degree in Philosophy, Strack moved to Cambridge, “looking for a change.” He admits that the transition to life in the Northeast was a bit strange at first. “I like Cambridge because it has a similar sense of diversity, but I still miss the craziness.” Strack found New Englanders to be, well, a bit stodgy. “The social hierarchy was surprising because that stuff just melted away in Southern California,” he says.

Strack was similarly disillusioned with the Harvard academic scene. He met his business partner, then-Divinity School student Frederick P. Carret ’90 while enrolled in the Ed School. The two shared a passion for motorcycles and a dissatisfaction with the Harvard intelligentsia. “We were both on academic paths,” Strack says, “but realized that it was not where we wanted to be. We started Central Kitchen in reaction to that.”

Strack and Carret found inspiration for Central Kitchen while traveling through Europe. “Stylistically, our experience shaped Central Kitchen. We had traveled through Paris and Barcelona and wanted to have a traditional European-style bistro.” Back in Cambridge, this translated into a restaurant that serves “simple but serious food.” Strack explains, “It’s fun and not staid.”

Though they began with only the bottom floor of their current location, the management duo eventually acquired the upstairs section. The previous occupants ran an Indian restaurant and occasionally butted heads with Strack and Carret. “We’d get in arguments with them because of the dead goat carcasses on the stairs,” a deadpan Strack says.

Strack and Carret stayed true to their original vision, modeling the upstairs room after their travel experiences.

Strack recounts how Carret had acquired two old motorcycles and the duo drove them all the way through North Africa. He explains that the experience was a large inspiration for the motif and feel of the upstairs room.

Strack takes particular pride in the newest part of Central Kitchen, which has been appropriately dubbed “Enormous Room.” He lovingly describes the décor of Enormous Room. “The two rooms are really two sides of the same coin,” Strack explains. The upstairs space, which features plush couches and chairs as well as artfully strewn pillows and rugs, has a decidedly Moroccan feel. The room is meant to provide an intimate, but lively, atmosphere. “At the beginning we had it lit only by candlelight,” says Strack, “but the Fire Department was not as impressed as I was.” Still, the mood is cozy. “Up here is much different from downstairs,” Strack says. “Most nights, if it’s working well, it’s the best loft party you’ve ever been to.”

As patrons enter Enormous Room, they are often greeted with a friendly “Take a seat wherever you can find it.” The statement is not to be taken lightly. The myriad couches and rugs lining the restaurant’s perimeter are filled with hungry customers who huddle around communal silver platters. There is no “waiting room”—instead, people waiting for a vacant spot mingle, drink and chat in the central pathway to the pulsing, flowing rhythms that fill the room.

Despite the crush, customers agree that Enormous Room is worth the wait. “This place bleeds atmosphere,” Trevor J. Walsh ’06 says approvingly. Harvard Dental School student Eric T. Swanson was impressed on his first visit to Enormous Room. “It really blends ethnic flavor in a way that makes it a relaxed and intimate environment,” he says. Though Enormous Room can’t claim to offer a tremendous amount of options, the two choices on the menu (regular and vegetarian) are equally delicious. When Strack leaves the kitchen to greet the dinner crowd, he is greeted by enthusiastic compliments from the satiated group. Strack briefly mingles and jokes with customers and employees before returning to the depths of the kitchen.

Strack honed his culinary skills in Paris, where he moved after Harvard. He had a friend who was attending Le Cordon Bleu, the legendary French culinary school. “I just started showing up,” Strack recalls. “My French wasn’t too good, but I could watch and I developed a passion for it.” As head chef, he maintains an active role in the ever-changing menu while still giving his staff freedom. “It’s boring to cook the same thing over and over again. Part of keeping it fresh and lively is about constant change.” He explains, “There is always a sense of creative turmoil that forces us out of the routine. We are always moving forwards.”

While academia may have left a sour taste in Strack’s mouth, the restaurant business has treated him well. “It is really fucking hard,” Strack admits, “but it’s really rewarding.” He especially appreciates the ability to be involved in all aspects of the restaurant—from the hands-on cooking to management. “The best thing is being your own boss, making money based on your own ideas.”

While not feeding the hip and hungry or hosting the likes of Cut Chemist, who stopped in before his recent Boston performance, Strack can be found either with his wife and children or playing basketball at his old stomping grounds, the MAC. “I don’t have a valid Harvard ID anymore, but I just give them my library card instead,” Strack says with a mischievous grin.