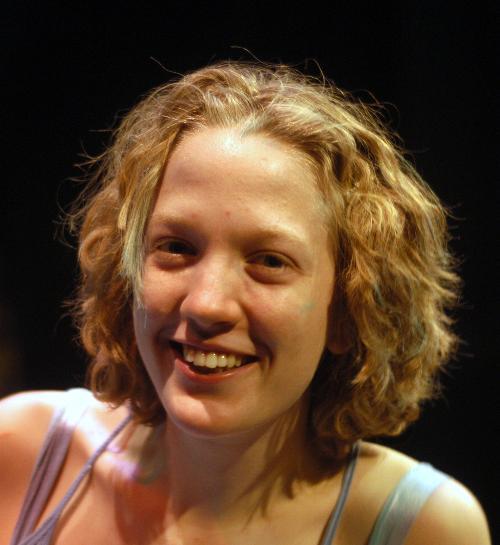 I’m really happy. It’s coming out to be a juicy little play. I’d done set design before, but I started writing and directing this year with The Impossibles. And then I directed Macbeth with puppets. And now this, I feel like this is kind of the prize, getting these two weekends at the Ex. I’ve wanted this for so long. It’s just so much fun. Stopover is just a fast, sweet night of beautifully unexpected moments. And I love my perfectly stellar cast.

How is Harvard as a community for artists?

It’s taken a long time for me to be getting to the point where I’m as happy making art here as I was in high school. Because it’s Harvard, it feels like it should be a place of destiny, like we’re all in a Kung Fu movie and it’s the last fight. That makes it really scary, but I’m scared most of the time when I make art.

What has been your most exciting project?

Stopover has had moments of sheer unbelievable bliss. There are also moments in painting when you think, ‘I’m in the studio. Hey world, you can do your own thing, I’m going to be here.’ This [Stopover] has really been the most exciting project, but also scary and hard. The Impossibles was hard, but in a very predictable and safe way. The Impossibles was hard in the sense that doing twenty minutes of exercise is hard. Stopover is much scarier. In Stopover we have this paintball scene; it’s like a mini action movie in dream sequence.

What’s your most embarrassing moment?

Once I was at the gym, and there was this gorgeous boy on the Stairmaster next to me. He was reading a play, and I thought this had to be destiny. So, to get his attention, I started drawing the other people in the gym. As it’s hard to draw on a Stairmaster, it ended up being this very squiggly impressionistic thing. But I was so embarrassed that I was making this outlandish attempt to get his attention that I didn’t even look at him, didn’t smile or attempt conversation or anything. That was probably my most embarrassing moment.

Where will you be in ten years?

In ten years I want to be a kind of person who knows how to get you to be excited about a thing but also can give you the feeling that everything is going to be okay. And I want to be a director.

What is one moment you would like to relive from the past four years?

Kissing this guy I really liked.

What has been your most fulfilling artistic/academic experience?

I haven’t always been the most constant painting student. But I was in the studio once painting this image of smoke from oil fires burning in Baghdad. And so, [Visiting Lecturer on Visual and Environmental Studies Sue] Williams, my painting professor, who also happens to be really famous, asked, ‘Who painted this?,’ and I said that I had. And she said, ‘Oh!’ and the surprise in her voice was just so beautiful and funny.

I would say that aside from the random outbursts of song, the inability to make up my mind.

Who are your ultimate heroes?

My older brother, James A. Carmichael ’01; Tom Stoppard, the playwright; Bill Waterson, the creator of Calvin and Hobbes; and Wayne Thiebaud, the painter.

What is the most inspiring locale on campus?

One of the things that inspires me most is seeing the sunset reflected in the West face of the Holyoke Center. It makes that big ugly building so f*ng beautiful you want to cry.