Students Square Off In Dance ‘Revolution’ 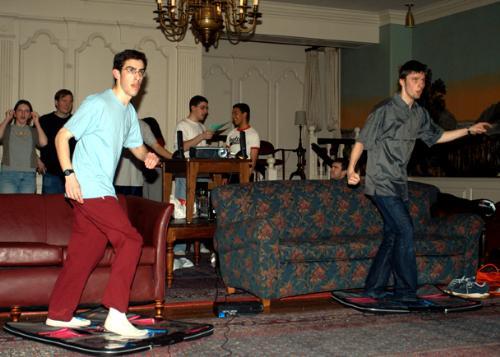 A dozen participants squared off in the competition, which was centered around a Sony Playstation and “Dance, Dance Revolution” (DDR)—the trendy dance simulation game.

The game involves standing on a touch-sensitive dance pad while colorful scrolling arrows on screen direct players to “dance” to a techno-beat song.

After consecutive rounds of single-elimination play, Lukasz Strozek ’06 and Joseph N. Fasano ’05 were crowned champions in the expert and beginner brackets, respectively.

“It’s a good workout,” Jagiello said. “Everyone can play it.”

Jason T. Abaluck ’06, who was entered in the “Expert Bracket,” said he first started playing an internet version of the game using a computer keyboard.

“They should replace the ellipticals in the MAC with DDR,” he suggested.

Those less experienced with “the Revolution” world were quick to note the game’s difficulty.

The words “Boo” flashed across the screen with frequency, indicating players had made a wrong move.

House Committee member Elizabeth M. Burke ’04 said she went to show her support for the event, initially planning just to watch. But ultimately she succumbed to the excitement.

Burke described her strategy. “I think I sort of freestyle instead of really use footwork,” she said.

Strozek, the expert champion, called the competition “fierce,” and said he had been practicing every week for about two hours since February.

“Since then I’m addicted,” he said.

To allow the tournament’s winners a chance “to show off their dance moves,” the House Committee awarded them free tickets to the Lowell House Spring formal.