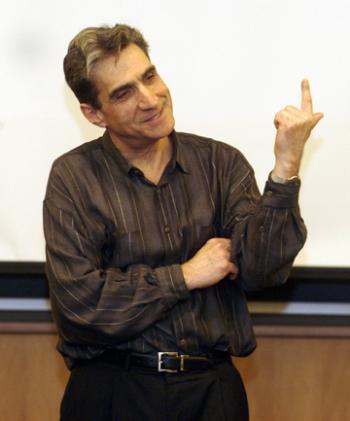 If a poem cannot be read aloud, it will eventually fade into obscurity, according to former national poet laureate Robert Pinsky, who spoke in Lamont Library’s Forum Room last night.

Pinsky presented excerpts from the Favorite Poem Project Video Collection, which he said he compiled to create “a snapshot of tshe United States of America through the lens of poetry in the year 2000.”

With the help of filmmaker Juanita Anderson, Pinsky interviewed Americans from a broad range of backgrounds, and had them read poems that they felt were important on camera .

“These videos show the relationship between the reader and the poem,” he said.

After Pinsky showed three people’s interviews, he spent an hour answering questions and talking with the audience, which numbered about 50.

“She seems extremely American and non-American as well,” said Pinsky.

He said the presence of Chin’s mother on screen served as a reminder of the suffering the family endured when they escaped from Cambodia and made the video particularly moving.

Many audience members also asked Pinsky to elaborate on his assertion that “A poem is not a challenge to see if you can say something smart. A poem is...something that sounds wonderful when you say it.”

To illustrate his point, Pinsky gave an impromptu recitation of Ben Jonson’s “His Excuse for Loving.”

At the same time, Pinsky stressed that intelligence was also crucial to appreciating poetry.

“I like smart things,” he assured a skeptical audience member.

“Poetry for me challenges the intelligence and the body,” Pinsky said.

He cited W.B. Yeats’ “Sailing to Byzantium,” which he said he taped above his toaster when he was 17.

Pinsky said his appreciation for the poem increased tremendously when he analyzed it several years later.

The Favorite Poems Project began with about 18,000 letters and e-mails from people offering to read, but only 50 made the final cut.

Pinsky credited his “graduate student slaves” at Boston University with helping him wade through the massive amount of material.

Though Pinsky has been travelling across the country presenting the project since its completion in 2000, this is its first showing at Harvard.

A poetry reading of Pinsky’s own work that was originally slated to follow the talk has been postponed to April 15.

“The audience was extremely lively, extremely engaged. I took a lot of pleasure in their enthusiastic response,” he said.

Pinsky said he does not plan to repeat the project in the future.

“I’m awfully busy writing poems,” he said. “But if someone else wants to do it, I commend them.”