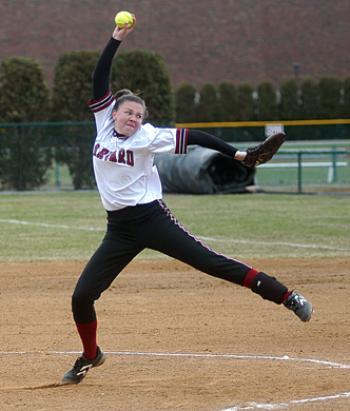 The Harvard softball team had an opponent far more relentless than Holy Cross yesterday at Soldier’s Field. Mother Nature got the last laugh as a wintry April Fool’s surprise cancelled the second game of the scheduled doubleheader. Despite the freezing temperatures and snow flurries, the Crimson (5-14) bats stayed hot as Harvard won the first and only game, 6-1.

After limiting the Crusaders (2-13) to no hits and the minimum three batters in the top of the first inning, Harvard came out with a spark as sophomore leadoff hitter Lauren Stefanchik was walked and then stole second. Stefanchik reached third by an illegal pitching motion by Holy Cross senior pitcher Megan Manner. It was a solid grounder through the middle of the infield by senior first baseman Tiffany Whitton that drove Stefanchik home and put the Crimson up 1-0.

The excitement picked up again in the top of the third inning when the Harvard defense refused to relinquish any runs. The Crusaders were in scoring position with the bases loaded and only one out.

Junior captain and pitcher Kara Brotemarkle battled a determined Suzanna Friel of Holy Cross, who managed a spinning line drive to second base for the second out. Brotemarkle avoided the last threat, forcing a pop fly to third base to end the inning.

“I felt a lot of things were working despite the cold,” Brotemarkle said. “The defense played really well, which is very helpful.”

Whitton, who was formerly a pitcher for the Crimson, lauded the junior hurler’s performance in the clutch.

“Kara did an amazing job on the mound,” Whitton said. “With bases loaded, she would usually get them to pop up or strike out which says a lot about the strength of the pitcher.”

The Crusaders were able to carry the threat through to the next inning with a home run by freshman outfielder Megan Lally, knotting the score at 1-1.

Any doubts of the success of the Crimson disappeared when it started a scoring string in the bottom of the sixth. It used six hits and a Holy Cross error to add five to the scoreboard, leading to the final score of 6-1.

“We’d been kind of knocking on the door for the whole game,” said junior shortstop Rachel Goldberg. “It was a matter of upping the intensity level a little bit to get things to fall.”

The hitting barrage started with a single by junior third baseman Louisa Canham. Harvard then added another five consecutive hits to put runners on the bases.

“My goal for the team has been to string four hits together, and we got five,” Whitton said. “I was really excited about that.”

Freshman catcher Erin Halpenny drove in Canham for the first run of the inning and what proved to be the game-winning run.

“It shows that we have depth on our team when a freshman can come up and hit in the winning run,” Whitton said.

Whitton added to the hitting fest with a three-run double. Freshman outfielder Pilar Adams knocked in the fifth and final run in before the inning ended.

The team was not surprised by its late inning efforts. In fact, it has established itself as a come-from-behind team.

“We’re definitely a team that you have to play every inning, and we will come from behind in the sixth or seventh innings and scare teams,” Whitton said. “We never give up. Maybe we just like the waiting for the end to pull it out.”

Holy Cross was unable to get any runs in the top of the seventh inning, and play stopped for the players to rest between games.

After a short break, the teams returned for the second game of the doubleheader. Two innings into the game, however, the umpires called it on account of the huge snow flakes swirling around and dwindling light.

Harvard hopes to carry the momentum from yesterday’s game on its visit to Boston College tomorrow.