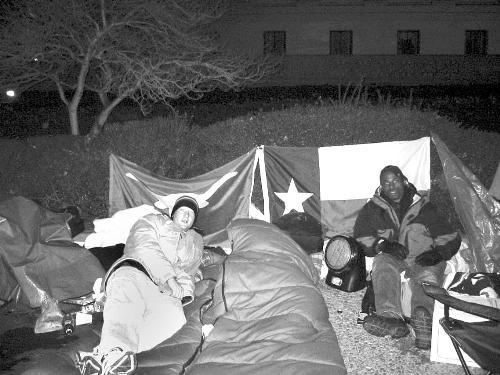 WASHINGTON—Harvard played a visible role both inside and outside of a packed Supreme Court yesterday when justices heard oral arguments in a pair of landmark affirmative action cases.

Justices and attorneys referred to Harvard studies showing the benefits of affirmative action in higher education and to the Harvard undergraduate admissions plan—which uses race as one factor in deciding whether to accept an applicant.

While the attorneys delivered their oral arguments, about 50 Harvard students joined thousands of others to rally outside of the building in support of affirmative action. Three others camped outside the Court for two nights to nab coveted seats inside for yesterday’s arguments.

The cases—Grutter v. Bollinger and Gratz v. Bollinger—involved white applicants to the University of Michigan’s law school and undergraduate programs who claim they were denied admission as a result of affirmative action policies which they call unconstitutional.

Yesterday’s oral arguments marked the first time the Court has considered race-conscious programs in higher education since the 1978 University of California Regents v. Bakke case, when the court struck down the use of quotas but permitted the use of race as one factor in admissions.

In that case, Harvard’s undergraduate admissions policy was cited as a model.

Harvard once again returned to the spotlight.

“I gather this case is not simply about public universities,” said Justice Ruth Bader Ginsburg. “This case is as much about Harvard as it is about Michigan.”

The Court set aside one hour for each case, but throughout the oral arguments the justices’ questions and attorneys’ remarks addressed a handful of similar concerns.

The first hour featured the case brought by Barbara Grutter, who was denied admission to the University of Michigan Law School in 1997 when she applied at age 43 with a 3.8 GPA and an LSAT score of 161 out of 180 possible points.

Michigan’s law school has said it considers race as one factor in admissions.

During the second hour, lawyers argued the case of Jennifer Gratz, a Michigan resident with a 3.8 GPA and an ACT score of 25 out of 36 possible points who was rejected from Michigan’s undergraduate program in 1995.

The undergraduate program uses a 150-point system to rate applicants in its admissions decisions, in which minorities, athletes or economically disadvantaged students receive 20 points.

When Kirk O. Kolbo, the attorney representing Grutter and Gratz, began his oral argument at 10 a.m., Justice Sandra Day O’Connor—widely considered to be one of the swing votes—quickly interrupted, noting that when a school receives “thousands of applications for just a few slots...inherent in that setting is making choices about which students to admit.”

But Solicitor General Theodore B. Olson, who spoke for 10 minutes in each case on behalf of the U.S. Government, repeatedly referred to Michigan’s law school and undergraduate policies as “a thinly disguised quota.”

Maureen E. Mahoney, the attorney for University of Michigan Law School, and John Payton, the attorney for Michigan’s undergraduate program, rejected the notion of the school’s policies as quotas, and instead spent the majority of their arguments describing the need for racial preferences.

Mahoney explicitly referred to Harvard’s plan as a model plan without a quota, and then compared it to Michigan’s law school policy of considering race as one factor in admissions.

Mahoney said that to achieve diversity, “a plan like the Harvard plan...can be used as an effective means [to ensure diversity].”

But when Ginsburg later referred to Harvard’s admissions policy, Justice Antonin Scalia dismissed the idea of Harvard’s policy as a model.

“Did the Court know that when the Harvard plan was originally adopted, its purpose was to achieve diversity by reducing the number of Jewish students from New York that were getting into Harvard on the basis of merit alone?” Scalia asked.

Scalia was referring to evidence that in the early 20th century, Harvard used a quota system to restrict the admission of Jewish students, according to Climenko Professor of Law Charles J. Ogletree, who attended yesterday’s oral arguments. But Ogletree said that Scalia’s comment had little relevance to arguments today.

“The plan Harvard has talked about is quite the contrary,” he said. “It is a plan designed to promote diversity of all points of view and to create a strong class of students.”

The Heart of the Matter

The military brief claims that “a highly qualified, racially diverse officer corps educated and trained to command our nation’s racially diverse enlisted ranks is essential to the military’s ability to fulfill its principal mission to provide national security.”

Ogletree described the discussion regarding the need for diversity in the military as “the most interesting line of questions.”

He also noted that despite their references to the military brief, the justices paid little attention to President Bush’s race-neutral plan for universities to admit the top 10 percent of each high school class in the state.

“They did not seem to embrace the Bush Administration’s claim that the 10 percent [plan] was able to [produce] the same goals as Bakke,” Ogletree said. “No justice seemed interested in it.”

The key legal issues in the case, at the core of many of the justices’ later questions—involved whether the state of Michigan has a “compelling interest” to consider race in admissions in order to attain diversity.

Along with that concept, Michigan’s attorneys argued that a “critical mass”—comprising a certain number of minority students whose presence is necessary at a university to make other minority students feel welcome—served a key role in ensuring diversity.

But several justices questioned the meaning of those terms.

“Is 2 percent a critical mass? Four percent? Eight percent? Does it stop being a quota because it [falls] between 8 and 12 percent? Once you use the term critical mass, you’re into quota-land,” Scalia said.

Ginsburg remarked that she first became familiar with the term in relation to the recruiting of females for law school.

Payton, one of the Michigan attorneys, said a critical mass is not a specific number, but something determined on a case-by-case basis by educators who are in frequent contact with their students.

Justice David H. Souter ’61 mentioned a study by former Harvard President Derek C. Bok to challenge Olson’s argument that affirmative action may in fact stigmatize minorities instead of benefitting them.

Bok co-authored a 1998 book—The Shape of the River—defending affirmative action in college admissions to prove what he considers the success of the Bakke decision.

Mahoney mentioned a study conducted by Professor of Education and Social Policy Gary A. Orfield, in which a majority of Harvard and Michigan law students said that “students of different races” provided a “clearly positive element of their educational experience.”

But Orfield, who participated in yesterday’s rallies in D.C., said the comment was “one of Scalia’s many cheap shots.”

“I was stunned by the hostility of Scalia and [Chief Justice William H.] Rehnquist’s questioning,” Orfield said. “Even the lawyers for the plaintiffs weren’t as hostile as some of the Supreme Court justices.”

Souter also questioned whether percentage plan relies upon the segregation of schools—an issue which the Civil Rights Project, led by Orfield, recently supported in a published study.

Thirty-five hours before the justices set foot in the courtroom for the two cases, three students from the Kennedy School of Government had claimed a spot on the sidewalk of East Capitol Street, camping out in order to guarantee themselves a seat to hear the landmark cases yesterday morning.

The three attended the University of Texas as undergraduates, and said they witnessed the impact of the 1996 ruling in the Hopwood v. Texas case, which struck down the use of affirmative action in Texas universities.

“It changed the environment on campus for the negative,” Carroll said.

After two nights in the cold, treks to the bathroom in Union Station, trips to the car to charge their cell phones and endless hours of card games, the three—numbers 27 through 29 in line—were admitted to oral arguments yesterday morning. The cut-off was number 50, Carroll said.

“I definitely think it was worth it,” Carroll said, “It was one of those once-in-a-lifetime experiences.”

Although the students, who were mostly from Harvard’s graduate schools, were ready to sacrifice sleep and class time for a social cause, the ride down was anything but political—except for the vote on which video to watch first.

On one of the buses, students slept, read and watched Zoolander, The Sixth Sense and My Big Fat Greek Wedding.

But the trip wasn’t all fun and games.

After the bus arrived in D.C. around 12:30 a.m. yesterday, a group of students arranged to meet at 4 a.m. to wait in the “three-minute-line” for brief public viewing of the oral arguments.

The remainder of the students met at 8 a.m. to rally in front of the Supreme Court and march to the Lincoln Memorial later in the afternoon.

Harvard Business School student Kimberly M. Kyles said she saw the trip as her first chance to support such an important cause.

“I’ve benefitted from affirmative action, and I feel like I’ve never done my part to advance things. This is the first opportunity for me to do that,” she said.

“I wanted to know I did some kind of activism my first year, and I believe in the cause,” Aghedo said.

Dahm Choi ’05 said his aspiration to become a high school teacher motivated him to take part in the rally.

“I want to be able to tell my students about experiences like this,” Choi said.

Alejandro Yepes, one of the organizers of the bus trip, said the presence of many Kennedy School students seemed only natural.

“It doesn’t matter if we miss class. We’re people committed to school, but this is so much more important than class,” he said. “That’s the good thing about the Kennedy School.”

Though thousands of protesters and two hours of oral arguments placed yesterday’s cases in the history books, it will be several months before the justices issue their ruling.

Ogletree said that an opinion is expected by June, and added that he is “cautiously optimistic” the Court will uphold the principle of affirmative action.

O’Connor and Justice Anthony M. Kennedy are expected to be the deciding votes.

Meanwhile, Gratz, the undergraduate denied admission to Michigan, said in a press conference after the arguments that she has moved on with her life, citing her recent marriage.

“What I’m doing is standing up for what I believe in,” she said.

Grutter said at yesterday’s press conference that she still intends to go to law school if she is admitted.