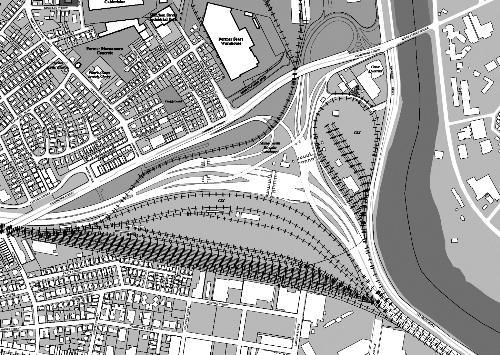 Harvard recently bid $75 million for this triangle-shaped parcel of land in South Allston, currently owned by the Massachusetts Turnpike Authority.. But the property is severely encumbered by CSX railways and easements.
By Lauren A.E. Schuker, Crimson Staff Writer

As the highest bidder in an auction for 91 acres of severely encumbered Allston land, Harvard will likely expand its land holdings across the river by nearly one third this Friday—but the new land could come with some heavy political baggage.

Harvard made two bids on the 91 acres of land—one for the bulk of the property, and a separate $5 million offer for 1.4 acres that was the only contested piece—to the property’s seller, the Massachusetts Turnpike Authority.

Although Harvard was the only bidder on most of the land, a bidding war of sorts did erupt over the tiny 1.4 acre piece of the land located between Harvard and Houghton Chemical, a small industrial company that currently operates on the parcel.

The company made a $500,000 bid for the property—and several local leaders have publicly urged the Turnpike Authority to accept Houghton’s bid over Harvard’s.

But Harvard’s approximately $5 million offer will probably win the auction for the contested piece, according to Turnpike Authority spokesperson Sean O’Neil.

“We still have to cross the t’s and dot the i’s, but Harvard came in as the highest bidder in both cases, and we are awarding the land based on the highest bid price for it, so the land’s future is pretty clear,” said O’Neil.

The University’s aggressive pursuit of the small parcel has raised the eyebrows of Boston-area politicians.

The president of Houghton Chemical—which produces industrial chemicals used in ink, photographic film and pharmaceuticals—said that the company’s location in Allston was integral to the company’s identity and added that he hopes Harvard won’t make them leave.

“Their offer clearly shows that they did not want us to get the land, and Harvard is a very powerful institution—richer than some small countries—and someday they are going to have a very beautiful, expansive campus in Allston,” said Bruce E. Houghton, president of the company and grandson of the owner. “Certainly, we were a little perplexed by Harvard’s bid—but Harvard is my new landlord and I look forward to working with them.”

Houghton said that the company has tried to build connections with the neighborhood and its residents by giving first priority to Allston residents when hiring and donating money to struggling non-profits in the neighborhood as well as local sports programs.

“Many years ago, we decided that we wanted to be different from other companies, that we wanted to be part of the surrounding community and establish ourselves as a resident in that community, and we’ve done that,” Houghton said yesterday. “That kind of thing is not easily replicable—we’ve been here since 1960 and don’t want to move.”

A Harvard official said yesterday that the University has no intention of forcing Houghton Chemical off the property.

“We have no plans to change this property in the foreseeable future,” said University spokesperson Lauren Marshall. “This is a long-term investment and we are thinking about the needs of the University in the future.”

Still, Tolman said he was concerned that Harvard was playing the bully in aggressively outbidding Houghton by quadrupling their offer.

“How can anybody compete with Harvard’s $20 billion endowment when they do stuff like this?” Tolman asked. “One has to look with bewilderment and amazement at the aggressive intentions of Harvard to adversely impact a community business that has been in the community for over 40 years.”

Tolman said that although all of the land—including the 1.4 acre parcel—could be useful to Harvard in the far-off future, he said that the University is too greedy a buyer and unfairly enabled by tax breaks from the state that it gets as a non-profit institution.

“I cannot fully fault them for this purchase, but if you look at their tax exemptions, I start to wonder if the legislature is not making a mistake granting tax exemption status to a institution that has a real estate division which is buying up property at a faster pace than I’ve ever seen in my entire life,” Tolman said.

The University’s $75 million bid for the 91 acres is only half of the $150 million which Turnpike Authority officials last year estimated Harvard would pay for the land, according to the Boston Globe.

But O’Neil said yesterday that the Turnpike is “very pleased that we can utilize this funding, and it is within the range we expected.”

Turnpike officials estimated that Harvard would bid anywhere between $60 and $100 million for the parcel, he said.

“There was speculation on the bid being higher or lower, but we are happy with Harvard’s bid,” O’Neil said. “There was also speculation that Boston University had strong interest in the property.”

B.U., Harvard’s expected rival for the property, did not put in a bid for parcel by the auction’s noon deadline yesterday. B.U. officials said the University did not bid because it wants to focus on current projects rather than new property.

An article in the Globe yesterday reported that the Turnpike Authority will put the $75 million towards maintaining the discount program for Fast Lane tolls and for the costly Big Dig project.

—Staff Writer Lauren A.E. Schuker can be reached at schuker@fas.harvard.edu.