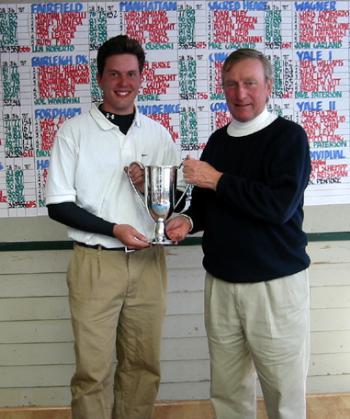 One might consider playing the Course at Yale to be equivalent to shifting lounge chairs on a sinking ship. If so, the Harvard men’s golf team has found the perfect deckhand in junior Andrew Klein.

Klein shined through the poor weather and difficult course, winning the Yale Invitational this weekend in New Haven, Conn. Klein’s 76-74-150, 10 over par, beat UConn’s Justin Ciombor by a single stroke, making Klein the first Crimson golfer to win a tournament since Alex Gonzalez ’98. Overall, Harvard placed fifth, with a score of 307-318-625, 13 strokes behind champion UConn.

While opening the spring season at Yale has become tradition, it is not always a pleasant one, as the Course is hard enough to manage on its own without adding habitually wretched weather. However, the Crimson has become accustomed to the distractions and this year’s difficult conditions were no surprise.

“It’s kind of like the swallows returning to Capistrano,” Klein said.

The Bulldogs’ home turf naturally rolls in a manner that golfers throughout the northeast dread facing, so the strategy going in was to avoid catastrophe and know what to expect.

“What institute of higher learning can justify spending money on a golf course?” Klein said. “A lot of people freak out because the course is unfair and I think I’ve kind of come to terms with that. I kept a real even keel on everything. I’m just really unspectacular.”

Klein’s success on the Course at Yale is not unprecedented. He finished second in the Yale Invitational this fall, falling to Andrew Svoboda of St. John’s University by just three strokes.

“I think at the end of the day, the person who manages the disaster best walks away champion,” Klein said.

“[Klein]’s the consistent presence and it’s nice knowing that every day he’s going to fire a low round,” sophomore Chris Wu said.

The first day of competition brought rain and temperatures just above freezing, a far cry from the team’s spring break trip to California, where the golfers played on a few of the top courses in the nation.

The first round was actually postponed for three hours because of frozen greens. Harvard handled the weather well, however, with Klein tied for fifth with Wu, junior Steve Mungovan and the Crimson squad just a few strokes out of first place.

“The day was miserable and a lot of guys kept it together,” Klein said. “Coach was really proud of them and, dammit, I was too. Usually, it’s the Harvard ‘I’m a sugarplum and I will melt when it rains.’”

The Crimson slid a bit on Sunday, eventually landing in fifth at 65 over par, with Yale and Hartford finishing third and fourth, respectively. Only one stroke separated the Hawks from the Bulldogs and Harvard from Hartford

“It was D.J.’s first tour at Yale and to go out and play as well as he did having seen the course once is something quite amazing,” Klein said.

Mungovan slipped on Sunday, carding an 88 after an opening-round 76 to finish in a tie for 43rd. Co-captain Joe Jackson rounded out the Harvard entrants, shooting 82-88-170 to tie for 65th.

The Crimson’s next challenge is the New England Championship in Providence, R.I.

—Staff writer Jessica T. Lee can be reached at lee45@fas.harvard.edu.