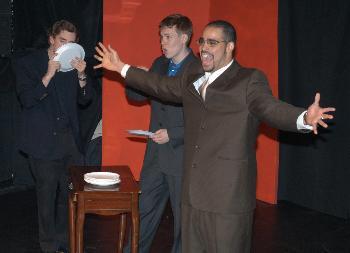 Hot Dogs in the Litter Box

“This is just a big, dooshy train wreck!” shouts a heckler planted in the audience of the Adams Pool Theater.  So the “Funny Undergrads Containing Knowledge” (figure out the acronym) would have you believe, as the peppy actors onstage claim to be Harvard’s newest improv group in act one of Hot Dogs in the Litter Box.

Yet the show, a collection of self-described “sketchy comedy,” plays more like a college version of Saturday Night Live.

Directed and produced by Geoffrey M. Stevens ’03, the performance features his own writing as well as that of his brother and colleagues from New York University.  In a variety of skits, they joke about issues familiar to a campus crowd—from sitcoms to dating to infomercials—with a particular fixation on combining eighties movies with Broadway shows. And despite the lighthearted, easy comedy, many of the scenes deal with common themes in an intelligent and fresh way.

Highlights include one faux commercial, where a black actor in a sombrero and poncho climbs through the window into an all-white dinner party with a big grin, promising, “Don’t worry, I’m not here to rob you!” He proceeds to give a sales pitch for “Amigros,” a new restaurant combining soul food and Mexican delicacies for a great ethnic dining experience. You’ll be eating “mucho good in the hood,” he says cheerily to a hysterical audience.

The “Very Special Episode” of the mock sitcom “A Very Special Episode” makes all the clichéd jokes about TV dramas, and the Broadway version of The Karate Kid is of course a heartfelt (if at times off-key) rendition of street fighting with a musical twist.  Still, the jokes work precisely because they are predictable—and the energy with which the actors pull them off is a delight to watch.

Much of the male-written humor centers on homoerotic punchlines, as the inexplicably gay-themed Top Gun musical is largely about men riding their co-pilots, and a group of friends hold an intervention when their buddy appears to be suffering from the emasculating effects of dating.

Still, from the “cool girlfriend” who proves herself to the boys by explaining what she would attack first (a bear or a tiger) if cornered, to the pro football player who laments that his child has been afflicted with “artism,” the skits actually attack our assumptions about gender head-on with unflinching satire.  For instance, the football star ends up solving his problem by drafting a free agent Russian orphan.

But Dave Barry meets Monty Python this is not. The amateur quality of some of the weaker sketches—from little Timmy getting his first boner for Chistmas to a sexually-charged nightclub act—may make a critic cringe, but the tempo of the whole show is so upbeat that the players are largely forgiven their comedic sins.

Could the entire show have been about half an hour shorter? Certainly. After intermission, so many of the same jokes about men threatened in their masculinity and Broadway actors overdoing weak scripts were wearing thin. But the ensemble of confident actors hammed their way through the whole production, and the intermission was earned, if only by hearing the players sing, “Let’s go out to the lobby and have ourselves a snack!”

Overall, Hot Dogs in the Litter Box delivers on its promise of low campus comedy with undergrad enthusiasm—an appropriately pleasing performance in the Adams Pool.