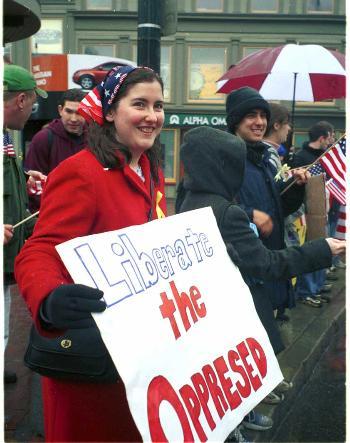 Waving American flags and cheering at honks from passing cars, about a dozen Harvard students endured at least two hours of freezing rain Saturday to show their support for U.S. troops in Iraq.

The rallyers met in front of the Statehouse just after Lieutenant Governor Kerry Healey and the British Consul General spoke at a ceremony honoring dead and missing coalition soldiers.

As the rallyers lined up along Beacon Street in the dismal rain, about five Northeastern students passed out posters that read “Down With Saddam” in red letters. During a lull in the drizzle, some rallyers began to sing “God Bless America.”

The crowd cheered as cars honked and riders on a Boston tour bus waved.

A few hundred feet away, an antiwar demonstration of roughly the same size was gathering at the bottom of Park Street.

The two groups exchanged taunts, but remained separate as the rallyers for the troops boarded the subway to continue their demonstration in Harvard Square.

“At this point, everyone should be attending a support the troops rally,” said Mark T. Silvestri ’05, secretary of the Harvard Republican Club.

The club’s treasurer, Jefferey P. Clemens ’05 and its president, Josh M. Mendelsohn ’05, were the only other undergraduates who attended the rally, which was organized by the College Republicans of Northeastern University.

But Silvestri said they represented a “silent majority” of Harvard students who are in support of the war.

“There’s a vocal group opposed to the war that has been very high profile,” Mendelsohn said. “But many students are definitely support of U.S. troops and action in Iraq.”

According to a Crimson poll conducted on March 20, a majority of students opposed the U.S. military action in Iraq.

Mendelsohn said that student supporters of the war may be less inclined to demonstrate because they are more “conservative” by nature.

First-year Harvard Law School (HLS) student Brett T. Joshpe is the founder of a group he calls “Students for Protecting America.” He came to the rally with about eight supporters from the law and divinity schools.

Joshpe said that while the rally was organized to show support for American troops, he came “to support both my troops and the policies my country is pursuing.”

“Everybody has the right to disagree and express an opinion,” Joshpe said, “but for a lot of people, it must be discouraging to see antiwar demonstrations. I think it’s important rather than seeing protests at home, the troops can see American flags and support.”

Harvard Divinity School student Bronwen C. McShea ’02, said she came to the rally because her brother Brendan is in Iraq with the U.S. Army.

“Having a brother in the military, I definitely wanted to be behind the war 100 percent,” she said.

McShea was wearing a yellow support-the-troops ribbon pinned to her red jacket. She had covered her hair with a bandana emblazoned in red, white and-blue.

McShea said that she had been upset by Harvard antiwar demonstrations such as a walkout that took place after the war began.

“While Harvard students have a lot of concern for people, I see a lot of childishness in the antiwar demonstrations,” she said. “It’s people overseas who secure their freedom to speak out.”

Carrying a sign that read “Liberate the Oppressed,” McShea also said that she hoped the rally would draw attention to the evils of Saddam Hussein’s rule.

“I’ve been surprised by how little concern people have for what the Iraqi people live under,” she said.

Gaining numbers from people passing through the Boston Common, the group boarded the T and continued their demonstration in Harvard Square.

“We’ll see if we get as warm a reception there,” Silvestri said. “I think we will.”

The rain didn’t let up, but many motorists in Harvard Square greeted the rallyers with honks and waves.

First-year HLS student Mark J. Barrera said he thought the rally had been a success.

“It was much tougher coming out today, and I think it will make a statement,” he said. “If people are risking their lives, it’s the least we can do to show up rain or shine to support them.”