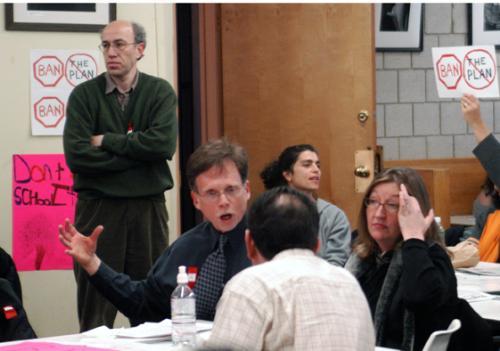 Cambridge public school parents agonize over the future of the school system in the minutes leading up to a tense six-hour-long debate last night. The school commitee voted to close two public elementary schools.
By Claire A. Pasternack, Crimson Staff Writer

Despite protests from over 200 parents demanding that their childrens’ schools be spared, the Cambridge School Committee voted 5-2 last night to close two of the city’s elementary schools and move five others into different buildings.

The vote ends a debate over closing or merging schools that has thrown the city into turmoil over the last year, and dragged on for six hours last night.

The plan is aimed at coping with declining enrollment and a budget deficit of $3.8 million. According to its author, Interim Superintendent of Schools Carolyn Turk, it will also spread resources to the district’s low-income and minority students.

Effective this fall, the Fitzgerald and Harrington Schools—which have been labelled as “underperforming” by the state—will close, and the high-performing Peabody and King Open Schools will move into their buildings, respectively.

Last night’s vote featured both cheering and jeering protestors who chanted in unison, poked fun at city officials and waved signs that read “Ban the Plan.”

Parents questioned the educational merits of the plan and accused committee members of acting for financial and political reasons.

Parents who opposed the plan—many of whom have children at the Peabody School—said the move to the Fitzgerald School would dismantle an already successful program.

“There is no parental support for this plan,” said Peabody School parent Ann Marie Michel. “It’s a bad plan that’s built up a lot of momentum.”

The reshuffling follows a series of over a half-dozen consolidation plans proposed since last May, all of which were voted down by the school committee after massive parental protest.

But because of support from district principals, heightened financial threats, exasperation with a process that had dragged on for months and new district leadership, this proposal quickly gained wider support.

Its opponents, however, turned out in force last night.

Several parents also said they suspected the plan gained popularity because some committee members were tired of a process that had dragged on for months and as a result were quick to express their support for the latest plan when it was unveiled mid-March.

“It almost seems you’re ready to support anything just to get us off your backs,” said parent John Kernochan.

“The selling feature behind this proposal was that it seemed to have four votes,” said committee member Alan C. Price, who voted against the plan.

Price suggested closing only one school this year and adopting a budget plan he created that he said would save over $3 million without closing schools.

But interspersed in the protest were several parents, teachers and school administrators who urged the committee to adopt the plan. Some cited the budget cuts that would result if the plan were rejected.

“The other options would decimate half the schools in Cambridge,” said Kennedy School Assistant Principal Joseph Grassia. “There is a silent majority out there that is behind this.”

“This is not about slamming schools together to make test scores better,” said committee member Nancy Walser, who voted in favor of the plan and presented ten reasons why she thought it was educationally sound. “I hope you will see the benefits of the plan for the whole district,” she said to booing parents, many of whom threatened to leave the school district. “We need your support—don’t go anywhere.”

Committee member Alice L. Turkel, who also supported the plan, said she considered it “flawed” but said that its potential benefits would outweigh its risks.

“We’re asking a lot of the strong schools, but I believe they can do it,” she said. “If we vote this plan we will shake public confidence, but if we don’t vote it we will continue to watch it dwindle.”

As Alfred B. Fantini announced his decision to vote in favor of the measure, thus creating the majority needed to pass the plan, nearly 50 parents left the room. After the final vote was announced, many parents, teachers, and administrators broke into tears.

“I worry about my kids because they think they did something wrong,” said Sheilah M. Donelin, who has been a Fitzgerald School math teacher for 32 years. “You’re just supposed to forget everything,” she said tearfully.

“This is musical plans,” said Peabody parent Patricia Nolan. “It is one of the worst that’s been on the table. I’m really, really disappointed—it’s unbelievable. Tomorrow I’ll have to decide what to do with my kid.”

Nolan said she knew two friends who planned to put their homes on the market today and move to Arlington and Belmont in search of new schools for their children to attend.