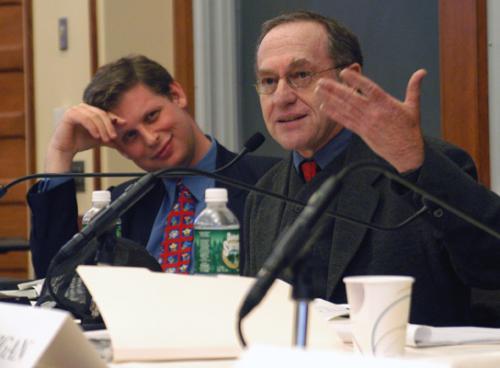 In front of an audience of about 200, Dershowitz advocated heavy regulation of gun purchases, saying that the amendment would prevent guns from being banned altogether.

Joining him in debating were Dennis Henigan, director of the Brady Center to Prevent Gun Violence’s Legal Action Program, and Eugene Volokh, a professor at UCLA School of Law. Elena Kagan, an HLS professor chosen last week to be the school’s new dean, moderated the debate.

The debate comes as Congress is considering a bill to limit the liability of gun manufacturers in civil lawsuits.

Blasting the bill, Henigan said representatives will wrongfully “wrap themselves in the Constitution and hide behind the Second Amendment myth” of gun-ownership rights to justify voting in favor of the bill.

Volokh defended the legislation, drawing a parallel between making gun-manufacturer Glock liable when its gun is used in a murder and making Ford and Absolut vodka liable when its products are involved with drunk-driving deaths.

More broadly, Henigan asserted that the Second Amendment, which grants the right to bear arms, is inapplicable in the modern era. He said the amendment does not apply today because a militia no longer exists, eliminating the rationale for gun ownership.

“If Madison wanted a broad use of the Second Amendment,” Henigan said to the audience, “why did he include this qualification at all?”

Citing a battery of statistics, Volokh made a vigorous argument for the desirability of private citizens owning handguns.

“People use guns to defend themselves hundreds of thousands of times per year,” he said. “Guns have no equal as self-defense tools.”

Arguing that more stringent gun control or handgun bans would only deny firearms to law-abiding citizens, he said that criminals would have no reason to respect the laws and could find a way around the restrictions.

“The choices are: should only criminals have guns, or should law-abiding citizens have guns too,” Volokh said.

Dershowitz said that he is not an expert on the Second Amendment and has never held a pistol, but joked about his experience as a defense attorney.

“I can’t say that about all of my clients,” he quipped.

Dershowitz said that “a narrow right to own guns for self-protection” existed but that there is still room for substantial government regulations.

Dershowitz, however, called the Second Amendement an “anachronism” because if America had the choice today it would not choose to be an “armed society.”

“The Second Amendment has no place in modern society,” he said.

Dershowitz said that ideally he would like a gun ban, but would settle for significant restrictions.

At the same time, he voiced his opposition to “constitutionalizing” the gun control debate by leaving it for the Supreme Court to decide. Dershowitz said he would prefer that controls are worked out through the legislative process.