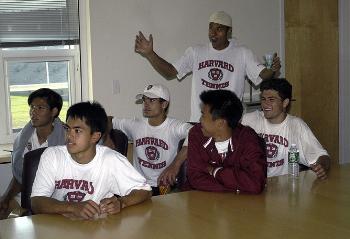 Never before have two NCAA tournaments been held concurrently at the same Harvard venue, but that is destined to change now that both the Harvard men’s and women’s Ivy champion tennis teams will be hosting NCAA first and second round matches next weekend.

The announcement was made official yesterday afternoon when the tournament pairings and sites were broadcast on ESPNEWS.

Harvard has hosted the men’s tournament each of the past three years, but this is the first time the Harvard women have ever hosted. Both men’s coach David Fish ’72 and women’s coach Gordon Graham said they were excited by the announcement.

Graham said that given the fan support each team received during their Ivy title-clinching matches, he expects a great event. Fish said he hopes the men and women will get to play back-to-back matches on May 10, which will happen provided the men play the later first round match and the women advance to the second round.

“Particular the Saturday [May 10] match becomes a chance to have a festival atmosphere,” Fish said.

Fish likened the event to the U.S. Open’s “Super Saturday” when both the men’s singles semifinals and women’s singles final are contested.

Harvard is one of eight schools hosting both the men’s and women’s tournament, along with Stanford, Florida, Kentucky, Texas A&M, Vanderbilt, Duke and UCLA.

The arrangement gives the Harvard men’s and women’s teams the rare opportunity to see each other play on the same day. Also, both teams get to avoid the inconvenience of a road trip during reading period.

“We all definitely wanted to be at home with exams coming up, and the home crowd’s always nice,” said women’s captain Sanja Bajin. “It’s nice not to have to travel.”

The Harvard women (17-3, 7-0 Ivy) were in the running to be one of the top 16 national seeds and the top seed at their site. But No. 16 seed Arizona (9-11), No. 22 in the ITA rankings, earned that distinction instead, despite being ranked behind the Crimson almost the entire season. Arizona will play Metro Atlantic champion Niagara (15-1), who has yet to face a nationally-ranked opposition this year.

Graham has consistently said that he prefers not to be the top seed at his team’s site. His reasoning is that Harvard will be better prepared for the second round by playing a tougher matchup in the first round. Rust is a greater concern for the Crimson, who will not have played in the three weeks prior to NCAAs, while most other teams played in conference tournaments this past weekend.

Harvard faces a familiar first round foe in Big 12 champion Oklahoma State (17-6). The Crimson swept the Cowgirls 7-0 at the Murr Center on March 19. Harvard won convincingly despite the absence of its No. 1 singles player, sophomore Courtney Bergman.

The stakes will be much higher when the teams meet next weekend, and Oklahoma State appears to be a much-improved, having won its last nine matches. Graham said Harvard won the last meeting by getting ahead early, and he hopes for the same again next weekend.

Arizona will be the Crimson’s likely second-round opponent, should it advance. The Wildcats finished sixth in the nation’s top-rated conference, the Pac 10, which earned seven of the top 16 tournament seeds.

The Wildcats earned a top 16 seed despite beating just two top 25 teams all season, while Harvard beat four, including No. 6 Washington. Harvard also had a better record against common opponents and fewer losses to teams outside the top 30. Among the listed NCAA seeding criteria, Arizona was only stronger in strength of schedule.

The Wildcats two top 25 wins were, however, in its last two matches of the season. One was against No. 4 California, who dealt Harvard its worst loss of the year.

The NCAA’s seeding decision is largely irrelevant, however, because Harvard will get to prove itself on the court after another week and a half of preparation.

“We’re already excited and pumped,” Bajin said. “None of us have played in NCAAs, so we’re excited, but we want to make sure we’re not trying to overdo it, causing any injuries or practicing too hard.”

Being only its site’s third seed, Harvard could have been paired with any of the top 16 seeds that opted not to host. Last year, the Crimson drew No. 4 seed Baylor. This year the top-ranked team at Beren will be No. 15 seed Alabama (17-9), a more beatable foe.

But with the easier second round matchup comes a tougher first round matchup in Colonial Athletic Association champion Virginia Commonwealth (24-3), ranked No. 16 nationally.

Fish said he does not mind being the underdog. It’s a role reversal from the Ivies, where Harvard has lost just eight league matches in the last 15 seasons.

“We always love this part of this season because we’ve already done the heavy lifting and played the matches where everyone’s out to get you,” Fish said. “Now it’s fun to be the hunter.”

Harvard might not be the heavy underdog that the rankings indicate. The Crimson has been on a tear, winning its last 10 matches entering the tournament.

Harvard’s juniors and lone senior know what to expect, this being their third straight season hosting NCAAs.

“I hope experience helps,” Fish said. “You go through something enough, you realize if you get so excited that you’re there, you won’t be able to tie your shoes.

“There is that opportunity to be distracted because someone puts up a big sign that says NCAA and you forget what you’ve been practicing and trying to make automatic all season,” Fish added. “I don’t expect that from this team.”