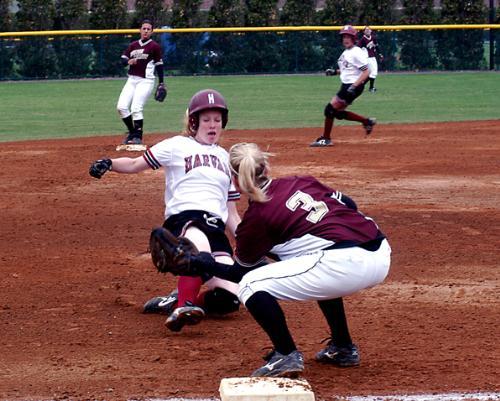 Harvard softball coach Jenny Allard said that her team has played its best softball of the year this past week. It’s a bittersweet achievement because the season is over.

The Crimson (15-26, 7-7 Ivy) split with Dartmouth (11-21, 5-9) in its final doubleheader on Saturday. Harvard won the first game 1-0 in 12 innings—its third extra-inning victory in its last four games—before falling 2-1 in its season finale. Freshman Cara Woodard knocked in both runs for the Crimson.

The opener was the second time in seven days junior tri-captain Kara Brotemarkle had reached double-digits innings in a single game. She lasted all 12 innings in a 3-2 win over Princeton on April 27.

“The team’s hitting their stride now,” Allard said. “It’s too bad that the season’s ending. We need to do that earlier in the year next year. We learned that.”

The weekend marked the end of the career of tri-captain Tiffany Whitton, the team’s lone senior. She graduates as the school’s all-time leader in home runs and among the leaders in batting average and RBI.

During her time at Harvard, her teams won two Ivy titles and an Eastern College Athletic Conference Championship.

Although this Crimson season ended without a title, it still had its moments. For Whitton, the most memorable will be the April 27 sweep of eventual Ivy-champion Princeton, where the games went a combined 22 innings.

“I think the Princeton doubleheader kind of defines my time at Harvard,” Whitton said. “That was great for the program and it showed a lot of heart to win two games in extra innings. If I look back on this season, the one thing I’ll remember is those Princeton games.”

With the Crimson trailing 2-0 in the bottom of the seventh, Whitton led off the inning with what would be the final at-bat of her career. She went out in style with a single up the middle to start a rally, though the comeback bid fell just short.

Dartmouth senior pitcher Christine Quattrocchi, the Ivy Pitcher of the Year in 2000 who has struggled ever since, closed her career on an upbeat note by pitching seven solid innings for the win.

Sophomore Lauren Stefanchik stole two bases to finish the season with 24, one short of the school single-season record. She also led the team with a .389 batting average. Whitton was second at .367.

For an encore of her 12-inning performance against Princeton last weekend, Brotemarkle turned in her second consecutive brilliant start with 10 shutout innings and 11 strikeouts on Saturday. McAteer pitched the last two innings to earn the victory.

The Harvard bats made sure the solid pitching did not go to waste in the bottom of the 12th Woodard hit into a fielder’s choice, with freshman Pilar Adams coming in from third and beating the throw home to clinch the Crimson’s last victory of the season.