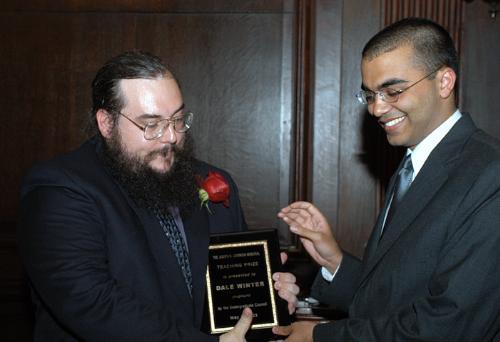 The winners were also overwhelmed.

“I’m so blown away,” Said said upon receiving her award. “I can’t believe I’m crying, it’s so corny.”

Several of Said’s students at the banquet praised her enthusiasm and said she worked tirelessly as a thesis advisor.

“We always look forward to going to tutorial,” said Steven N. Jacobs ’05, who is also a Crimson editor.

Winter, who teaches introductory calculus, was surrounded at his table by admiring students.

Those who nominated Winter wrote that he memorized every student’s name—about 100 of them—within the first two weeks of class.

Winter said he was “just elated” upon receiving the prize.

“But even if there’s no award at the end, the investment in these guys, that’s the real award,” he added.

Chelsea S. Simmons ’06, who came to the banquet to support Winter, called him “the most amazing guy ever.”

“He knows everything about everything. His energy is infectious,” she said.

Friedman, said he was “absolutely delighted” with his award.

“Economics is such a large concentration that it can be hard to get to know professors,” she said.

She added that Friedman grades students’ papers himself, not relying on teaching fellows.

SAC Vice Chair Sheila R. Adams ’05 said that in choosing winners, the committee looks for commitment to students both inside and outside the classroom.

“Instilling passion for the material is very important,” she said.

She added that teachers should respond well to questions outside class and make an effort to get to know their students “not just as students, but as people.”

Adams said the turnout at the event was twice what it was last year.

“I think it’s great that so many students want to nominate great teachers,” she said.

The awards commemorate Joseph R. Levenson ’41, a history professor who taught at the University of California until his death in a boating accident in 1969.

—Staff writer William B. Higgins can be reached at whiggins@fas.harvard.edu.