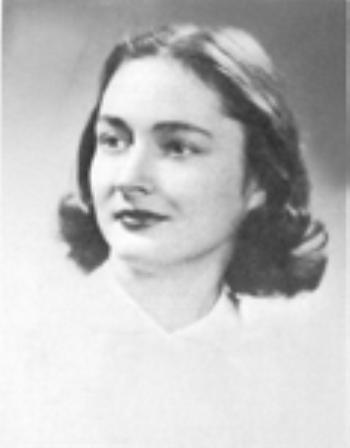 Last week a voice in a dream told Janet McNeill Hively ’53-’54 to “seek the everlasting.”

But the energetic teacher, planner and community leader has been “seeking the everlasting” all of her life, first as a sophomore class president and activist at Radcliffe, then as a housewife and mother of two actively involved in community service, and later as a divorcée working her way up the Minneapolis political system’s ladder and currently as a widow dedicated to the education of older Minnesotans.

All the while, she has continued her own education, often taking classes in areas that have sparked her fancy, from oriental art to statistics, and even earning a Ph.D. at the age of 69.

Hively has pursued so many different paths in seeking to fulfill her life mission that, when asked what she does for a living, she gives an unusual response.

“I’m a connector. My job in the world is to connect people and ideas,” she says.

But the E.B. White quote that the self-proclaimed “workaholic” submitted to the 50th reunion committee describes the trade-offs she has made throughout her life:

“I arise in the morning torn between the desire to improve the world and a desire to enjoy the world. That makes it hard to plan the day,” she writes.

She says she ended up there because, after receiving admission and a scholarship, the headmistress of her Connecticut high school told her she had to uphold the reputation of the school.

“I’m not sure if it was the right place for me; it was so big,” Hively says.

Though she often felt out of place among the students from New York City—whom she considered “the most sophisticated people in the world”—Hively says her involvement in extracurriculars prepared her for a lifetime of leadership in the community.

During her time at Radcliffe, the government concentrator served as president of her sophomore class and president of the Harvard-Radcliffe chapter of the World Federalist Association, a national political advocacy organization which supports the United Nations. She also sang in the Radcliffe Choral Society.

The culture of Radcliffe during her years as an undergraduate involved what the deans called “gracious living,” Hively explains.

“You had candles at the dinner table, white table cloths, people waiting on your table,” she says. “Your job was to marry Harvard and MIT graduates, have their children and raise them to be leaders.”

Hively says she didn’t share this “gracious living mentality” and even bet a friend that she wouldn’t marry before the age of 30.

But after contracting polio during a summer trip to Mexico City between sophomore and junior year, Hively’s plans quickly changed.

She spent what should have been her junior year in the hospital. Her boyfriend—fellow Harvard student Wells Hively ’53—came to visit her every day.

She returned to school the following year and married this Harvard sweetheart, right before he was drafted to fight in the Korean War.

The Ties That Bind

Hively spent the next chapter of her life devoted to her husband and family, but continued to find time for causes that were important to her.

Shortly thereafter, she took a job as a substitute teacher at a local high school, sparking a commitment to education that has lasted throughout her career.

Hively says she was fired from this position because she refused to pass students on the basketball team, “who basically couldn’t write a sentence.”

Once her husband finished serving in the army, the couple returned to Cambridge to take classes at the Graduate School of Education.

Hively says she dropped out two weeks shy of earning her master’s degree because she couldn’t deal with the large class of 35 students to which she had been assigned.

Later, while Hively’s husband earned his Ph.D., she worked to support the couple as assistant art director at Allyn & Bacon, a publishing company, until her first pregnancy in 1960.

“The rule was you could not work past the sixth month, and of course you would never come back once you had a child,” Hively says in a mildly sarcastic tone.

In 1963, her husband’s career again required a relocation, and the family moved to Minnesota, where Hively has spent the bulk of her life ever since.

While her husband taught psychology at the University of Minnesota (UMN), Hively became what she calls “a very active volunteer” with the League of Women Voters and local environmental groups, coordinating efforts to implement pollution control legislation and laying the groundwork for the service-oriented career that would follow.

Her husband left her for a fellow psychologist, she says, giving her no choice but to draw on her experiences and connections as a volunteer to begin to make a living on her own.

Almost every position she has since held—and the list goes on and on—has some foundation in the volunteer work she conducted earlier in her life.

“I always talk about how volunteer work is the best training,” she says. “It gets your foot in the door.”

In Hively’s case, the door in which she stuck her foot was the Minneapolis political machine.

From her volunteer position on Minnesota’s Riverfront Advisory Committee, she was hired to develop a plan for the state’s riverfront development. And because of her active role as a volunteer for the Parent Teacher Association, she worked for three years evaluating local school programs as part of the Minneapolis Accountability Project.

In these jobs, she gained the political and administrative experience that helped her land a job as a planning consultant to the superintendent of the Minneapolis Public Schools. In that role, Hively developed a five-year plan to desegregate local public schools by allowing students to choose which schools they attended.

As she was building up her resume, Hively married her second husband John G. Darley, then psychology department chair at UMN, in 1976. She says she decided to keep her first husband’s last name so that she could share it with her children.

For six years in the 1980s, Hively served as Minneapolis’ deputy mayor, a position in which she managed the office for Mayor Donald M. Fraser.

And at the end of the decade, Hively decided to use her experience and connections to start her own non-profit organization called Minneapolis YOUTH TRUST, a “schools-business-labor-community collaborative to prepare youth for productive careers.”Moving On

In the early ’90s, Hively says her family life took a turn for the worse. Within a span of a few months after her son’s marriage, both her mother and second husband passed away.

When a head hunter called her in 1991 to offer her a job as president of the Golden Apple Foundation for Excellence in Teaching, Hively knew it was time for a change.

She moved to Chicago to lead the organization, which recognizes and helps recruit outstanding teachers. During her three-year tenure, the foundation became a statewide initiative and added a program which also recognized outstanding high school seniors.

As Hively entered her early 60s, she decided that it was time for the teachers themselves to run the Golden Apple Foundation and returned to Minnesota.

A dean at UMN offered her the opportunity to become a senior fellow there, allowing her to pursue educational projects including service learning and internship initiatives.

Today, Hively continues to work at UMN, but her work focus has changed from K-12 education to the education of senior citizens.

As senior fellow and coordinator for the UMN Vital Aging Network, she spends her days connecting senior citizens to educational opportunities.

She says one of her jobs as a Radcliffe undergraduate led to her interest in the productivity of the aging population.

“I was so touched by the humiliation she was suffering. She was so articulate, but there she was, not being cared for, and that moved me deeply,” Hively says. “I think that’s one of the reasons I’m in the field I’m in now.”

Barbara Muesing, dean of UMN’s College for Continuing Education, says Hively’s high-energy and visionary nature have contributed to her success with the Vital Aging Network.

“She imagines a different kind of future and can build strategies to get there,” Muesing says.

Muesing also attests to Hively’s unique ability to serve as a “broker.”

“She has a fabulous network,” Muesing says. “There’s hardly a subject that comes up where she can’t suggest a name and phone number of somebody who can help you.”

For the first time in her life, Hively has plans to slow down. Next year, a consulting firm will take over Hively’s duties for the Vital Aging Network, although she will continue to remain active as a senior adviser to the group.

“I avoid using the word retiring. It implies that you’re withdrawing,” Hively says.

Since her graduation from Radcliffe in 1954, Hively has not stopped learning.

In addition to her work at Harvard’s Graduate School of Education, Hively earned a master’s degree in organizational communications from UMN and a certificate in Harvard’s Kennedy School of Government senior executives program.

And in the spring of 2001, at the age of 69, she earned her Ph.D. from UMN’s Department of Work, Community and Family Education after writing a dissertation about the productivity of aging agriculturalists in rural Minnesota.

There is no end in sight for Hively’s pursuit of knowledge. With more time on her hands in the near future, she plans to devote even more hours to learning from those around her.

She hopes to meet with Minneapolis coffee shop owners, for example, to facilitate a weekly table where she and others would invite random people to engage in interesting conversation about deep topics, such as “What matters?” and “What can we do to make this neighborhood a better place?”

She will also continue to teach and take courses at Minnesota’s Elder Learning Institute.

Muesing nominated Hively for the ‘Ageless Hero’ award, which she won last year for her accomplishments as an older Minnesotan.

“An institution that she came from should be mighty proud,” Muesing says.