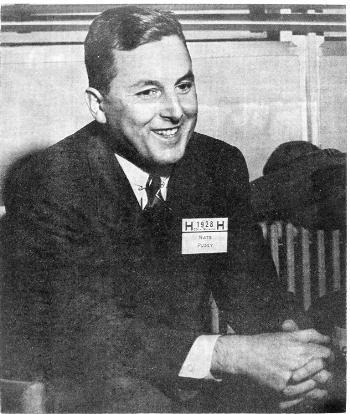 NATHAN M. PUSEY ’28 was selected by the Harvard Corporation in June 1953 to replace James B. Conant ’14 as University president. The choice was a suprise to many.
By Elisabeth S. Theodore, Crimson Staff Writer

On the day before commencement 50 years ago, James Bryant Conant ’14 and Nathan Marsh Pusey ’28 met for the first time.

They arrived together by chance at Logan Airport—in the outgoing Conant’s opinion, “a most inappropriate place to meet Harvard’s next president.”

Pusey was returning to Harvard in June 1953 to celebrate his 25th class reunion and to take over from Conant as Harvard’s 24th president.

Conant, who hailed from an old Massachusetts family, was a prominent faculty member when he began his presidency in 1933. He spent 20 years transforming Harvard into an intellectual mecca whose faculty members were the best in their fields.

Pusey, an Iowa native and the first Harvard president born west of New England, was the deeply religious president of tiny Lawrence College in Appleton, Wis., in 1953.

His selection was a surprise to most people inside and outside the University, but the move was deliberate on the part of a Corporation that wanted a greater focus on undergraduate teaching.

He would hold the position for 18 years, leading the University closer toward the need-blind meritocracy and financial powerhouse it is today, through the ’50s and into the turbulent 1960s.

By the time he retired in 1971, the College had transformed into a predominantly liberal, modern campus.

The six Corporation members who chose Pusey aimed for a sea change from Conant, a jet-setting chemist who worked on the Manhattan Project and left Harvard abruptly in January 1953 to become President Eisenhower’s High Commissioner for Germany.

“After 20 years of Conant, with his emphasis on research and his involvement in world affairs and national affairs, they wanted someone who would really focus on the school and the College,” says Morton Keller, a Brandeis historian who co-wrote a book on 20th century Harvard history, Making Harvard Modern.

“They liked his being religious, being a humanist, being a college man, in other words they liked everything about him that distinguished him from Conant,” Keller says.

Pusey had graduated from the College in 1928 and earned a doctorate in classics in 1935. After several years of teaching, in 1944 he became president of Lawrence College, a small school in Wisconsin that emphasized teaching rather than research.

Fred L. Glimp ’50, who served briefly as dean of the College under Pusey and has worked in various administrative positions at Harvard over the last 50 years, says Pusey’s selection was something of a surprise.

As the story goes, Glimp says, Corporation member Thomas S. Lamont ’21 took a trip west of the Mississippi to evaluate some candidates. After meeting with Pusey, he was so impressed that he immediately recommended the Lawrence president for the position when he returned to Cambridge.

Before even discussing the rest of the trip, “he said he found the guy he thought we should hire,” Glimp says.

Pusey met with the Corporation to discuss education at Harvard—but supposedly did not realize until a second meeting in May that he was a candidate for the position.

As The Crimson suggested, everyone thought following Conant’s resignation that “Harvard’s next president will, in all probability, be a white, Protestant, Boston-born, Harvard-educated, University Faculty member, between 36 and 52 years old. At least, all his American-born predecessors have been.”

As the Faculty became more interested in research and less in teaching, however, the Corporation was hoping Pusey could break the mold and return the College to “the center of things,” Keller says.

Initially, the Faculty was not entirely happy about the decision to hire a president who was more of a teacher than a scholar, Keller says.

“The Faculty at this time was getting to be more and more professional—disciplinarily minded, and research-oriented rather than teaching-oriented,” he says. “The Faculty was going in one direction and he represented the opposite direction.”

But Keller says Pusey “realized very quickly...that he wasn’t in Kansas anymore” and soon began to follow the current at Harvard, focusing on cultivating resources over improving undergraduate education.

Through the “Program for Harvard College,” Pusey raised $82.5 million, a large sum then, to strengthen the College through more student scholarships, construction projects and higher salaries to attract better faculty members.

As G.I. candidates declined, Pusey and his deans felt they needed an increased financial aid program to maintain meritocratic admissions, says Glimp, who was also director of freshman scholarships and later dean of admissions under Pusey.

During the last years of Conant’s presidency, the G.I. Bill had meant that the ablest veterans could attend Harvard without thought to cost.

But by 1953, Glimp says, “admissions were meritocratic, but the hole in the bucket was financial aid.”

By ensuring that part of the $82.5 million went to increased financial aid for undergraduates, Pusey hoped to maintain this more meritocratic admissions policy.

The students who graduated as Pusey entered, in the Class of 1953, were some of the last remnants of those World War II veterans who swarmed to colleges on the G.I. Bill.

But by the time of Pusey’s selection, Keller says, the student body had returned primarily to the younger, less serious set from the uncharacteristically old, work-oriented veterans.

“By the early 1950s, people were commenting that it was starting to get back to the pre-war years of college hijinks,” Keller says.

One first-year climbed a tree in the winter of 1953 and refused to come down until the Corporation made Eliot House Master John Finley the president of the University. Another student suggested Adlai Stevenson, the failed presidental candidate, would be the ideal replacement.

But in general, Keller says, students of the ’50s were more interested in going to football games than in Harvard’s new president.

Pusey would tell Harvard students during his first month in office that “living and practicing religion must supplement the mere studying and reading about it.”

Nevertheless, the student body’s gradual shift towards a liberal mentality made Pusey more popular early on because of his vocal opposition to conservative Senator Joseph McCarthy, who targeted the 24th president for allegedly being soft on communism at Harvard.

Charles S. Boit ’53 remembers the animosity of McCarthy as marking the selection of Pusey in his senior year.

“He did not like Nate Pusey, and of course McCarthy turned out to be what people thought he was anyways—low grade,” Boit said.

Pusey had opposed McCarthy’s election to the senate, and McCarthy accused Pusey of being a “rabid, anti anti-Communist.”

While he allowed that Pusey was not himself a communist, McCarthy said he could be “compared to the undercover Communist who slaps at the Communist Party in general terms, cusses out the thoroughly well known Communist, and then directs his energy toward those who are really hurting the Communist party.”

Several Harvard professors were called to testify before the House Un-American Activities Committee during the 1952-1953 school year. Associate Professor of Physics Wendell H. Furry said he was not a member of Communist Party but took the Fifth when testifying before the committee—as did two other Harvard professors.

The Corporation chastised the three for their decision, and put Furry on “probation,” but did not dismiss them from Harvard.

Pusey, called out by McCarthy during his first year as president, said publicly that no members of the Harvard faculty were communists.

In the 1950s, Pusey saw the increasing liberalization of the student body and the shift away from the old aristocratic mentality.

And, at the time, his staunch defense of academic freedom and support of increasingly meritocratic admissions.

But by the late 1960s, this growing liberalism would reach its height with the 1969 storming of University Hall. This ultimate leftist protest revealed how far the campus had shifted since Pusey’s inauguration.

And the president who was responsible for bringing Harvard into the modern world of academia retired soon after.