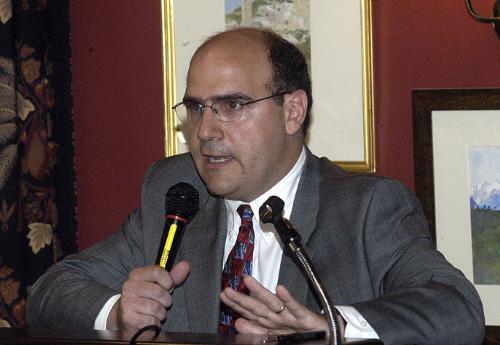 Iuliano has served as acting general counsel for the past year. Though his responsibilities will not change as he assumes the position of full University Vice President and General Counsel, his office has moved into Massachusetts Hall, providing “greater access to the president and provost,” he said. He now occupies an as-yet undecorated office on the corner of the second floor of University Hall.

The Office of the General Counsel (OGC) is responsible for all legal matters at the University and Iuliano will serve as one of the president’s top advisors. It is among the highest paid jobs at Harvard; Taylor earned $305,511 during 2002, the latest year for which figures were available.

Iuliano said his biggest challenge would come from the sheer number of legal matters the University handles on a daily basis. He said that changes in federal law and national attitude have resulted in greater scrutiny on non-profit organizations.

“The University is increasingly pulled into all forms of litigation,” he said.

In addition to supervising the University’s courtroom litigation—which is usually handled by outside firms—the 12 lawyer office provides legal advice across the University, from the President’s office down to student groups drawing up contracts.

As one of five vice presidents, Iuliano is also responsible for the Harvard University Police Department and the Harvard International Office.

In his past responsibilities at the University, Iuliano has overseen Harvard’s response to an $102 million lawsuit filed by the federal government that alleges that the University violated the terms of a government contract to advise Russia on its transition to capitalism.

He said he was not sure yet how the OGC’s staffing would shift as he moves into his role officially and whether or not he would continue to be as involved in that case.

He was also involved in drafting the friend-of-the-court brief that Harvard submitted in the affirmative action cases before the U.S. Supreme Court this year. In its brief, Harvard asked the Court to uphold the principle of affirmative action, which it did in a ruling Monday.

In addition to his legal responsibilities, Iuliano said he plans to continue teaching a course on higher education law at the Graduate School of Education.

Before he returned to his alma mater in 1994, Iuliano worked on cases involving drug, tax, fraud, money-laundering and labor law at the U.S. Attorney’s Office in Boston.

According to officials with knowledge of the search for Taylor’s replacement, University President Lawrence H. Summers had been considering two candidates for the post: Iuliano and an unnamed former lawyer for the Department of Justice. The search process that ended this month took longer than it has in previous transitions.