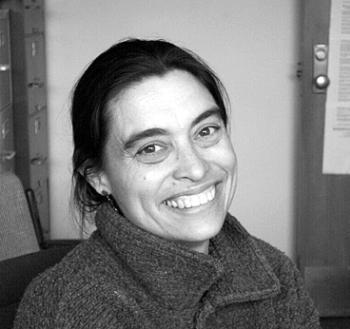 In 1987 in South Africa, Gay W. Seidman ’78 confronted riot police and snarling dogs blocking the entrance to the headquarters of the Congress of South African Trade Unions. The University of California at Berkeley graduate student, already nervous about doing research on the South African labor movement under the noses of the oppressive apartheid regime, turned the corner and watched through a fog of tear gas as police arrested and beat the workers inside. She, too, was almost apprehended before the officers relented at the behest of a lawyer for the labor movement. As she puts it, her nearly disastrous encounter with the South African authorities is “a great fieldwork story.”

But the brutal crackdown that Seidman witnessed that day in South Africa is not the only story she has to tell. She has been an observer, researcher and reporter her whole life. She grew up in western Africa, served as president of The Crimson, sat on Harvard’s Board of Overseers, wrote textbooks for a newly-independent Zimbabwe, earned a handful of graduate degrees from Berkeley—and at this time last week, she was conducting field research in Guatemala.

Her latest project, which brought her to Central America, is a comparative study of labor monitoring procedures in developing countries. Yet Seidman, who now teaches sociology at the University of Wisconsin at Madison, still jokingly insists that she is a “completely boring Midwestern academic.”

Seidman spent about half of her childhood in Ghana, Nigeria, Tanzania and Zambia with her family before heading off to boarding school in the United States with her twin sister, Neva Seidman Makgetla ’78.

When she got to Harvard, she became a social studies concentrator and began spending a great deal of time in The Crimson’s newsroom. Seidman explained that the encouragement of then-Managing Editor Jeff Leonard ’76 and others on the staff made it easy to “spend more time [at The Crimson] than was probably appropriate.”

By her sophomore year, Seidman was spending dozens of hours a week at 14 Plympton Street.

Former Business Manager William L. Pollack ’78 recalls, “She was one of those people who lived at The Crimson…I never quite figured out how she did it.”

“I majored in The Crimson, actually,” Seidman jokes. In November 1976, she was designated president of the 104th Guard of The Harvard Crimson—the first woman to occupy the position.

As president of The Crimson, Seidman loved writing, managing the presses and “hanging out until sunrise.”

“It was a way to make Harvard much more…autonomous. I had a lot more control over what I got to do,” she says.

Ensconced behind the brick walls of 14 Plympton, Seidman also sought to cover the growing South African divestment movement on campus.

“I thought that [the anti-apartheid story] would be bigger earlier [than most],” she explains. “This was really going to matter.”

“I thought I wanted to be a journalist,” she says, “But I couldn’t imagine…being on a police beat somewhere.”

She went to the Alumni Office to browse for job opportunities and ended up volunteering for the U.N. Food and Agriculture Organization in Swaziland, a small, mountainous country in southeastern Africa bordered by South Africa and Mozambique.

After six months of volunteer work, Seidman began teaching English, history and African studies in “one of those classically under-staffed, under-resourced African schools.” During this time she hitchhiked around nearby South Africa with her former Harvard roommate, Leslie Rabinobitz ’78. She also covered South Africa as a freelance journalist, bringing her closer to the anti-apartheid movement.

“They actually didn’t teach history for the first couple of years because they had no textbooks that weren’t imbued with the most amazing racism,” she says.

Buoyed by her experience teaching middle-schoolers history in Swaziland, Seidman co-authored a textbook that was used for several years throughout the newly-independent country.

After textbook writing in Zimbabwe, Seidman realized that fellowships were available for students to go to graduate school in the United States. She entered a master’s degree program in sociology at Berkeley, figuring it “would be a great way to go back to the States and figure out what I wanted to do when I grow up.”

Upon completing her master’s at Berkeley, Seidman left for Botswana to write a development studies textbook. Twenty years later, it is still “on some English teacher’s list of great resources on Southern Africa,” she says.

While in Botswana, she also met Heinz Klug, an exiled South African journalist helping to set up the Solidarity News Service, an independent news agency, to cover South Africa.

But Seidman returned to Berkeley in 1984 to pursue a Ph.D. in sociology. She and her husband commuted half-way across the world to see one another until the Botswana Security Police told Klug in 1985 that, “the South African government had targeted him, and they were going to kill him,” Seidman says.

Klug joined Seidman at Berkeley, and only days later, South African authorities raided Botswana, killing anti-apartheid activists. She received condolence letters for weeks from people thinking Klug had been killed in the massacre.

While working on her Ph.D., Seidman became much more active in the American anti-apartheid movement, traveling the country speaking at college campuses. This did not, however, deter her from going to South Africa during a state of emergency to do field research for her dissertation—a comparative study of labor unions in the democratic opposition in Brazil and South Africa.

“Academics have to be passionate,” Seidman insists, “But it’s important to leave yourself open to inconvenient facts...politics are better when they’re grounded in reality.”

The only way she could get permission to enter the country from the apartheid government was to get a tourist visa, claiming that she was going to visit old friends.

She says she thought she was going to “walk straight into jail,” but the South African authorities failed to connect Seidman with her anti-apartheid activities. She maintains that this “only goes to show that repressive regimes are not as organized as they’d like to think they are.”

On top of all this, Seidman was elected to Harvard’s Board of Overseers in 1986 on a pro-divestment platform. It was a time-consuming commitment for a Ph.D. candidate and anti-apartheid activist to take on, but she agreed to try because Harvard’s stance on divestment was used as a model for universities across the country. In her six years as an overseer, she was not able to get Harvard to divest from companies doing business in apartheid South Africa, but her term paved the way for the election of Bishop Desmond Tutu and others sympathetic to the divestment cause to the Board of Overseers in the late 1980s, and they were able to get a small passage calling for responsible investing in the Board of Overseers Handbook.

Seidman completed her doctorate in 1990, and entered a favorable job market in academia. She was offered a position in the Sociology Department at the University of Wisconsin, Madison, which has one of the “top-ranked sociology departments in the country.”

She has stayed in Madison ever since, raising two boys with Klug, who is now an associate professor of law at Madison. She also has a niece, Dominika Lorraine Seidman ’03, in this year’s graduating class and another niece who is a rising junior in Eliot House.

Now that Seidman has settled into academic life in Wisconsin, she insists that her life is “totally mundane.”

Yet Seidman was only available for an interview after flying home on a late-night flight from another research jaunt in Guatemala last Monday. Though happily tenured in the Ivory Tower, she still continues to energetically engage in a life filled with travel, activism, analysis and reflection.

—Staff writer Stephen W. Stromberg can be reached at stromber@fas.harvard.edu.