The Day the Sky Fell

When the Blizzard of '78 caused a statewide lockdown, Harvard followed suit-grudgingly 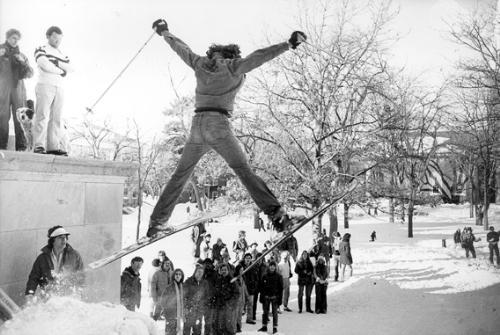 A student demonstrates his skiing skills on a freshly constructed ski jump on the steps of Widener Library as Tercentenary Theater observers look on admiringly.
By Stephanie M. Skier, Crimson Staff Writer

When a blizzard dropped more than a foot of snow on Cambridge one night this past February, students hoped the College would follow the lead of other Boston-area universities and temporarily close its doors.

Despite their pleas, classes continued as planned at Harvard, which prides itself on a tradition of staying open, no matter what weather might hit.

“Harvard University will close only for an act of God, such as the end of the world,” said former Dean of Students Archie C. Epps III during a similar snow storm in 1977 when the University continued its operations as usual.

But even this Harvard tradition had to bend on Feb. 6, 1978, when the infamous Blizzard of ’78 struck Massachusetts, shutting down the state for nearly a week. The morning after the storm began, The Crimson reported wind gusts of up to 92 miles per hour and snow accumulation of eight to 16 inches. Thousands of residents were evacuated from the coastal towns of Hull, Revere and Winthrop, which faced serious flooding.

Despite the major hit to the state’s transportation infrastructure, The Crimson reported, “Harvard will be open, of course.”

But The Crimson had spoken too soon. When then-Gov. Michael S. Dukakis declared a state of emergency and snowfall reached over a foot in Harvard Yard, administrators were forced to do what they had not done since the great unnamed hurricane of September 1938—they shut down the University.

Dukakis ordered all schools and non-essential businesses throughout the state to close for two days and banned all traffic except emergency and snow removal vehicles. He called the state’s 8,500 National Guard service members to duty to remove snow from the roads and help stranded motorists.

Derek C. Bok, then-University president, decided to halt all of Harvard’s operations except “essential services” of the University police, Food Services and Health Services, in compliance with the governor’s emergency order.

Some students were surprised that Harvard would close, even when the state emergency compelled a shutdown.

“I had previously thought Harvard was invulnerable even to nuclear attack,” said Richard L. Powell ’79.

But most were grateful for the day off.

“Thank God for acts of God,” proclaimed Nicholas H. Vanderbilt ’80. “But I’m not looking forward to digging my car out.”

Trucks carrying heating oil could not reach Harvard through the snowy roads. As a result, hot water was shut off in all the Houses in order to conserve fuel on Tuesday, the day after the storm began.

University Health Services stayed open with a minimum of its staff and only accepted emergency cases.

“I only got to work because the University police came and picked me and the dean of the Faculty up,” says then-Dean of the College John B. Fox Jr. ’59.

One Harvard service continued operating even at the height of the storm—the College’s dining halls. Despite shortages of food and dining hall staff, all undergraduate dining halls remained open, with students filling in for dining hall workers who were unable to get to work. Some workers at the Freshman Union dining hall remained at Harvard overnight, after realizing Monday evening that the snow was too heavy to allow them to travel home.

The Red Cross held a special blood drive in Quincy House to help alleviate a winter blood shortage, which was worsened by the blizzard.

“A party atmosphere reigned in Harvard Square as a multitude of students and Cambridge residents enjoyed the winter wonderland” with “a sense of anarchy” replacing the usual structure of Harvard life, The Crimson reported.

Harvard students took to the streets on skis, converting Memorial Drive and Mt. Auburn Street into thoroughfares for cross-country skiing.

An adventurous group of first-year downhill skiers built a makeshift ramp on one side of the Widener steps and impressed onlookers with their jumps. On the other side of the library, students sledded down the stairs on dining hall trays.

Members of Kirkland House frolicked in the snow in their bathing suits, pausing only briefly to pose for a Crimson photographer. Snow sculptures abounded in the Yard.

Some of these snowbound antics were “dangerous fun,” according to Lt. Francis P. Shannon of the Harvard University Police Department. One first-year seriously injured his leg after taking a 40-foot jump into Pusey Library’s sunken courtyard and hitting his leg on a snow-covered stone wall.

While many students used the snow days to relax indoors or frolic in the snow, dozens of Harvard students volunteered at Cambridge’s four Red Cross centers set up to deal with the weather emergency.

And a more dedicated bunch of some Harvard Business School students who were stranded at the school when the blizzard hit continued to meet unofficially despite the University shutdown.

By Wednesday, the snow had reached 29 inches in Boston, the deepest snowfall since records were first kept a century earlier.

On that Ash Wednesday, the Catholic Archdiocese of Boston granted a special dispensation to the many Catholics who were unable to get to a church. Despite the weather and the dispensation, about 450 people attended the noon Ash Wednesday Mass at St. Paul’s Catholic Church in Harvard Square, with some making their way to church on skis, The Crimson reported.

And after Monday’s Beanpot Hockey Tournament, nearly 200 of the 13,000 spectators were stuck in the Boston Garden overnight as major roads closed. The concession stands in the Garden stayed open all night and the stranded hockey fans slept in the stands.

Harvard officials ended the three-day-long University shutdown on Thursday, when they announced that classes would meet on a “walk-in” basis, meaning that students and faculty were encouraged to walk to classes, in keeping with the state ban on non-emergency traffic on all roads in eastern Massachusetts.

The University resumed all of its normal operations on Feb. 13, 1978—one week after the blizzard’s snow began to fall.

The College extended the deadline for filing undergraduate study cards by one day, until Feb. 15.

Despite the three-day disruption of Harvard’s operations, the College did not make any further changes in the academic calendar because of the storm. Faculty teaching courses that met twice a week added a third lecture to make up for those missed during the storm, while others held classes on Saturdays or during reading period.

—Staff writer Stephanie M. Skier can be reached at skier@fas.harvard.edu.