Women may be in the classrooms, but if Harvard's walls could talk, they'd tell a different story. 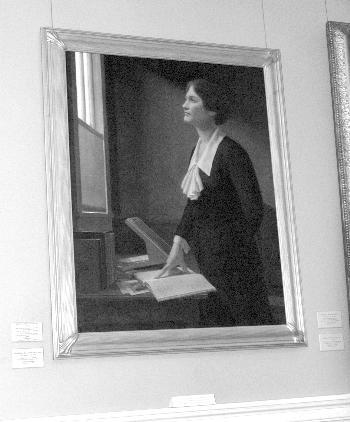 A portrait of Cecilia Payne-Gaposchkin, the first person to receive a Ph.D. in astronomy from Harvard, was hung last year in the Faculty Room in University Hall. Only two of 49 portraits hanging in the room are of women.
By Kate L. Rakoczy, Crimson Staff Writer

Studying in the Widener library or eating in Annenberg Dining Hall, Harvard scholars are forever in the company of men—men whose images adorn the University’s walls and halls.

Harvard University boasts a collection of 760 portraits, but only 79 are of women. Roughly 40 of those were originally part of Radcliffe’s collection.

Many say this discrepancy undermines the significance of the contributions made by women to Harvard—both in the past and now.

“Although it is a minor detail about our campus, it is really a thing that students internalize,” says Natalia A.J. Truszkowska ’04, former president of the Radcliffe Union of Students.

When former Dean of the Faculty Jeremy R. Knowles began his tenure roughly 12 years ago, he appointed three professors to serve as “Curators of the Faculty Room.”

The gender disparity was so apparent that, according to Knowles, his “first charge” to the committee was to “deal with the unremitting maleness” of the portraits in the Faculty room in University Hall—none portrayed females at the time.

The curators’ endeavors resulted in the hanging of the first portrait of a woman on the walls of the Faculty room in the mid-1990s.

Helen Maud Cam, who in 1948 became the first woman tenured by the Faculty, was the first female memorialized in a portrait—a painting that now hangs on the south wall of the Faculty room.

More recently, a portrait of Cecilia Payne-Gaposchkin, the first person to receive a Ph.D. in astronomy from Harvard and a dedicated humanist, was unveiled last winter.

“My last count was 49 images in that room. Now there are 47 people with XY chromosomes and two with XX,” says Dudley R. Herschbach, Baird professor of science.

He and his wife, Associate Dean of the College Georgene B. Herschbach, commissioned the second portrait.

Still, the Cam and Gaposchkin portraits are only two in a sea of 49 portraits of older white men that line the Faculty Room’s walls.

Roughly 40 of the 50 portraits that hang in Radcliffe’s various buildings are of women. But portrayals of women lag in the College.

When the Barker Center for the Humanities was opened in 1997, it contained no solo portraits of women—despite the fact that the building is a center for several humanities departments where women have made their mark. The only woman who was depicted on the new building’s walls was the wife of the building’s namesake, who appeared in a portait with her husband.

Eventually, a portrait of Helen Keller was placed in the building. The portrait of the first blind graduate of Radcliffe had previously resided in Georgene Herschbach’s office.

Other women have also found their way onto Harvard’s walls. Amy Lowell watches over the Lowell House dining hall and Emily Dickinson hangs in Houghton Library. And several portraits of women have ascended to a spot on the walls of the Faculty Club—a building whose doors were barred to women until 1963. This year, the University added two new portraits of women to its collection.

Several of Harvard’s most prominent buildings, such as Widener Library and Sever Hall, were funded by donations from women. But in both of these cases, the buildings were constructed to commemorate the men in these women’s lives—in the case of Mrs. Widener, her son, in the case of Mrs. Sever, her husband.

To better highlight women’s achievements, the University could start a new trend of commissioning portraits of women who are making an impact at Harvard today, says Curator of the University Portrait Collection Sandra Grindlay.

But some argue that the portrait itself is a monument ill-suited for honoring the women who have helped to shape Harvard’s history.

“[The portrait] is a form of history as biography of the great man that perpetuated the 17th, 18th and 19th centuries of hanging someone on the wall,” says Phillips Professor of Early American History Laurel T. Ulrich.

Ulrich says she would rather see photographs of women in action.

“I’m more interested in this activist dynamic of women’s sports teams, women marching in suffrage parades, making bandages during World War I,” Ulrich says, noting that there are thousands of such photos in Harvard’s archives that she says could be more widely displayed throughout the Harvard community.

Ulrich says a less conventional monument that the University could use as a model is the Anne Dudley Bradstreet Gate, located along the North border of the Yard near Canaday, which was dedicated to the 25th anniversary of the integration of women into Harvard’s houses. But Bradstreet had no affiliation with the University and, in the future, Ulrich says, Harvard might better look to name gates after women affiliated with the institution.

Another model Ulrich suggests is the “Women’s Table,” a Yale sculpture designed by Maya Lin that celebrates the achievements of women at the university.

Most agree that there are myriad women—past and present—who have made great contributions to the history of Harvard and yet remain conspicuously out of the limelight.

There is, for example, no monument to Anne Hutchinson, the zealous Puritan woman whose challenges to the Puritan clergy of Boston were a large part of the inspiration behind the founding of a college in Cambridge.

No portrait or statue honors Abby Leach, the ambitious young woman who in 1878 sought out the instruction of three separate Harvard professors.

And a portrait of Mrs. Samuel Ripley, who tutored Harvard preparatory students to supplement her husband’s income, hangs in poor condition on the wall of the office of Jane Knowles, interim director of Radcliffe’s Schlesinger Library.

“She was the mother of eight, taught boys and rusticated Harvard students in her home [and] would read Homer or Virgil as she shelled peas and rocked a cradle,” Knowles said of Ripley in a memo she sent to Emilie Norris, who is the project manager for the University cultural property survey.

Such women, many argue, deserve more recognition. But because the University’s portrait collection is composed solely of gifts, the only way to increase the number of monuments to women on Harvard’s campus is for people to commission such works, according to Grindlay.

But increasing the visibility of monuments to women is important nonetheless, says Georgene Herschbach, as their presence helps to set a tone of respect for the contributions that women have made to Harvard over the course of its history.

“It gives the message that this place is by and for women as well as men,” she says. “Women are a part of this community at every level.”

Just as portraits of men dominate the walls here, Harvard’s buildings most often bare the names of prominent male donors and historical figures. But in the past few years, women have entered the realm of philanthropy at Harvard.

A recently built student common area beneath Memorial Hall and a renovated reading room in Widener Library were funded by donations from Katherine B. Loker, and the dorm once known as North House has taken on the name of Carol K. Pforzheimer ’31.

And some say a concerted effort from the University’s fundraisers to court women and their pocketbooks has resulted in a dramatic change.

Halfway through the campaign, she says, she “discovered that women were not fully on the radar screen as a body of people to approach.”

To attempt to remedy this problem, Hauser—along with four other women with Harvard ties—set up the $15 million Harvard Women’s Matching Fund in 1998 to encourage higher levels of giving, starting with a minimum gift of $25,000 or more. Donations made by a woman were matched up to $250,000. Within 60 business days, the fund was exhausted.

Diana L. Nelson ’84, chair of the Harvard College Fund and a member of the task force, points to pre-merger tensions between Harvard and Radcliffe as a major obstacle to female giving at the time. “People who are generous to the College often can meet the College leaders and have a voice,” she says. “And I felt that women, because they were essentially being pulled in two directions, didn’t have the same kind of voice.”

Though she describes the campaign as a crucial “turning point,” she stresses that Harvard’s fundraisers must remain vigilant.

“I think we need to continue to make sure to bring women into the process and events, because I think women often have very complicated lives,” she says. “It takes some real effort to engage them. We can’t just think there’s momentum that will just draw women in without a concerted effort.”

—Catherine E. Shoichet contributed to the reporting of this story.

—Portions of this article appeared in the February 27, 2002 edition of The Crimson.