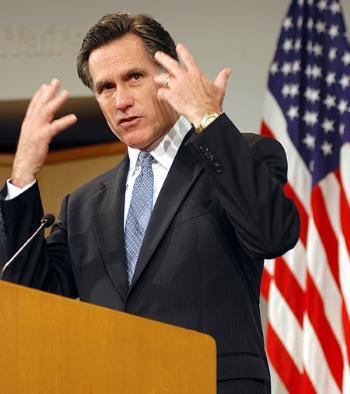 Brushing aside his speechwriters’ proposed address in favor of one he wrote himself, Republican Massachusetts Governor W. Mitt Romney advised future public servants in the Kennedy School of Government’s graduating class to define themselves not by policy but by principle.

Romney’s selection as Class Day speaker sparked debate at the Kennedy School last month, as students questioned whether his private-sector background made him unqualified to speak on the traditional topic of public service. Some even unsuccessfully petitioned the administration to revoke their invitation.

In his 15-minute speech, Romney, who was elected governor last year, drew on his experience outside of the public sector as a venture capitalist and as a key organizer of the 2002 Salt Lake Olympics.

He told the story of an unprincipled business associate “who would shake hands on a deal and then construct a rational argument for abandoning it.”

Though the associate became successful in the business world, Romney said, “the cracks began to show in his family life.”

Arguing that a leader’s devotion to principle has far more impact than his politics, Romney’s remarks—which he said he wrote himself this weekend after discarding his speechwriters’ proposals—wove in personal stories and historical lessons.

His late father, former Michigan governor George W. Romney, ran an unsuccessful campaign for the presidency that he used to compare jokingly to a miniskirt, Romney said, because it was “short and revealing.” Romney suggested his father alienated some members of his party by supporting the civil rights movement and marching with Martin Luther King.

But he said he was astonished at the outpouring of public emotion when his father died.

“Quite simply, his legacy was as someone devoted to principle,” Romney said.

Other remarks condemned the “corrupt principles” of an American media and entertainment industry which Romney said have created a culture of “decadence rationalized, not conviction.”

But he offered advice for “how to make ourselves better.”

Romney said “getting a life, having a family life” enables individuals to “move beyond oneself and one’s circle.”

He encouraged the graduating class to pursue a larger purpose.

“The ignobling irony of an action void of principle should disperse the temptation to make it,” he said.

“I agree with the part where he went into the media promoting violence in society, and people who value greed putting themselves first,” Parekin said.

Some students said Romney had entered hostile political territory by coming to the liberal school.

Romney will return to campus tomorrow to attend his son’s graduation from Harvard Business School, from which Romney himself graduated in 1975 with a joint degree from the Business School and Harvard Law School.

—Staff writer Elizabeth S. Widdicombe can be reached at widdicom@fas.harvard.edu.