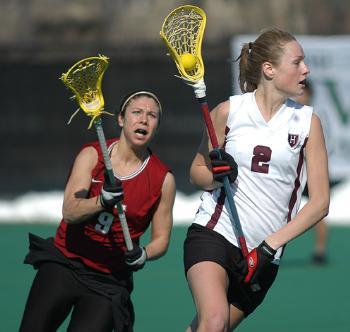 Sometimes even the greatest of careers lacks the storybook ending.

Citing increased pressures involved with coaching, Carole Kleinfelder stepped down this year as head coach of the Harvard women’s lacrosse team after more than 20 years at the school.

Kleinfelder leaves with the 1990 national championship and more wins than any coach in college women’s lacrosse history. Yet, she may be remembered more for revolutionizing the game and her lifelong dedication to women’s sports.

Unfortunately, this past season was not indicative of Kleinfelder’s history of success in the sport.

Despite moments of rock-solid play against some of the nation’s better teams, Harvard had difficulty all season putting a complete game together.

The Crimson particularly struggled in the second half, where it was outscored in almost every game this season.

After dropping its first two games, Harvard looked to regain its promising form of late last season—when it rallied to win the ECAC Championship—with a 9-8 win over Boston College.

But then the second-half woes caught up with the Crimson.

Harvard dropped two heartbreakers on its west-coast swing, losing 7-6 to Cal before falling 10-6 to then-No. 18 Stanford despite playing perhaps its best half of the season. The Crimson let each game slip away after intermission.

“We start to play kind of timid [after halftime],” junior goaltender Laura Mancini said. “When it’s so close we don’t want to take big risks and we’re afraid of making mistakes. We wait around too much instead of taking a more active role. And unfortunately that’s not the way to win a game.”

Things hit rock bottom two weeks later against Penn, when the Crimson was outscored 9-0 in the second half as the Quakers turned a 5-2 halftime deficit into an 11-5 win and dealt Harvard its sixth-straight loss.

“We recognize that we have the talent that we need to win, [but] we need to start taking advantage of our opportunities,” Mancini said during the losing streak. “Every loss is a hit to our confidence.”

Harvard rebounded three days later with a 10-4 victory over New Hampshire. And although the Crimson could not upset league powers Dartmouth and Princeton, it did knock off Columbia in Kleinfelder’s final home game.

Harvard does have reason to hope for improvement next year. The Crimson will return all but five players from this year’s team, although among those graduating is leading scorer Katie Shaughnessy.

The team’s biggest loss, though, will occur not on the field but along the sidelines.

—Staff writer Elijah M. Alper can be reached at alper@post.harvard.edu.