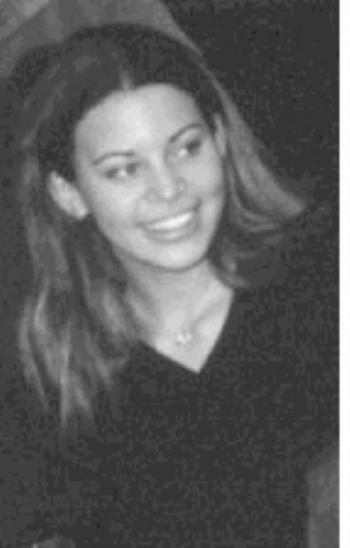 For Johanna N. Paretzky ’03, Harvard has been about new directions.

After playing sports since the age of five, she laid aside athletics and found herself drawn to a singing career instead.

After attending a Jewish Day School in suburban Maryland for twelve years, she rose to become president of Kuumba, the 90-member choir famous for its soulful expressions of black creativity and spirituality.

“The scales are tipped in the opposite way,” she says, looking back on how she has grown in college.

In a way, even attending Harvard was a new direction. The school was not on her radar screen at the beginning of her college search, and it took repeated encouragement from friends who visited the campus and told her that it was “the perfect fit” for her that led Paretzky to look at the course catalog—she found herself instantly taken.

“I had to admit to my mom that it seemed like the perfect fit,” she recalls.

A native of Potomac, Md., Paretzky grew up attending the small Charles E. Smith Jewish Day School—her father is Jewish and her mother, who is black, converted to Judiasm before she was born.

She wrote her application essay on how growing up in a Jewish community without much consciousness of race left her without the resources to explore her black heritage.

A thick envelope arrived from Byerly Hall and after an overnight visit dispelled her lingering fears of the school’s “snob factor,” Paretzky was off to Cambridge.

While in high school she was a standout soccer and basketball player, the star forward arrived on campus knowing that athletics would not continue to define her in college—she felt that the commitment necssary for collegiate athletics just wasn’t in her.

“The interest in playing at a D1 school, at such a level, wasn’t as high as I knew it should be,” she explains.

The eminently friendly and disarming Paretzky spent her first fall exploring, taking Core classes as she searched for a concentration and joining several student groups, including the Mission Hill After School Program and the Jewish a cappella group Mizmor Shir.

It wasn’t, however, until the Kuumba Christmas concert that winter that she discovered what would come to be her “family” at Harvard. The concert in Memorial Church marked a turning point in her life.

There to support a friend, she says she found herself captivated by the music and the passion of the group’s singers.

“The sheer power was amazing,” she recalls. “I’ve been hooked ever since.”

It wasn’t long before she was on stage herself with Kuumba.

Over the coming months, Paretzky says she was pleasantly surprised to find that her friends encouraged her singing—they seemed to think she had promise. During her second year in Mizmor Shir, she even won an award for best soloist at the 2001 International Competition of Collegiate A Cappella.

As time passed, her primary focus, though, was Kuumba. She felt herself “falling more and more in love” with Kuumba’s music and its creative camaraderie, as well as connecting with its creative expression of her heritage.

Paretzky joined the group’s a cappella subset, Sisters of Kuumba, and was elected the choir’s vice president her junior year. For the past year she’s also been developing her repertoire by singing with the local band Soulfège, started by Kuumba alumni.

Over the last 18 months, she has begun to write her own music and to consider seriously pursuing music as a career.

“My gut was telling me that’s what I wanted to do. This is what I love,” the Pforzheimer resident explains, her eyes sparkling.

While she has remained active throughout college in the campus Jewish community—serving on Hillel’s Leadership Council and winning a prestigious Netivot Fellowship her first year that included a three-week trip to Israel and support for a year-long community service program—Paretzky has also explored and developed her black heritage.

A religion concentrator, she wrote her thesis this year on the “inter-religiousness” of Martin Luther King, Jr. For her community service and leadership, the Harvard Foundation for Intercultural and Race Relations honored her with an award this spring and the Black Men’s Forum recognized her with one of its Senior Leadership Awards.

“I’ve come to see myself as much as a black leader, a black voice, as any other part of my identity,” Paretzky explains.

Monica Huerta ’03, the vice president of Kuumba, says that Paretzky has been one of the most confident and encouraging leaders the group has seen in recent years. She took over leadership of the group in a year when it had lost nearly 25 seniors to graduation and helped push the choir forward. Her personality and enthusiasm was integral to the group’s success this year, Huerta says.

“No matter what’s happening, she keeps her head high,” Huerta explains. “She does it all with an effortlessness and grace that not many people can pull off.”

When Paretzky left her oral examinations this spring—often regarded as one of the biggest trials of the senior year—she met a friend for coffee, beaming. There was not a complaint to be heard about the grilling by senior faculty.

“That was the most amazing, most envigorating intellectual experience of my life,” she told the friend.

Following graduation, Paretzky says she is looking forward to starting her career as a professional vocalist—beginning with her first formal vocal training this summer and then on wherever it may lead.

While her academic interests still run to the philosophical and theological, Paretzky’s heart belongs solely to music. Her previous plans of attending divinity school or following her longtime love of athletics into a career of working in sports management have fallen by the wayside. As she explains, a wide smile breaking out across her face, “I got sidetracked along the way.”

—Staff writer Garrett M. Graff can be reached at ggraff@post.harvard.edu.