Harvard defeats more top-25 teams than any squad in school histroy, including an upset of No. 6 Washington 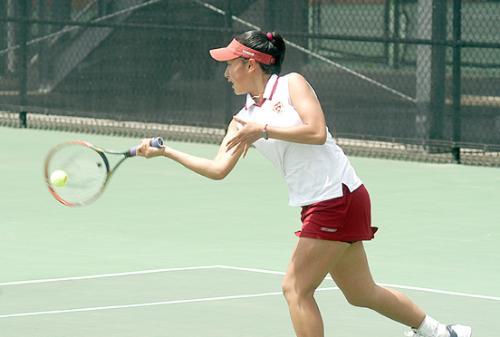 The Harvard women’s tennis team, including freshman EVA WANG, top, celebrates its win over Oklahoma State in the first round of NCAAs, held at the Beren Tennis Center. The Crimson won 4-1 and proceeded to beat Arizona 4-3 the following day.
By David R. De remer, Crimson Staff Writer

Anything seemed possible this year for the Harvard women’s tennis team.

The first week of the spring season, the Crimson topped No. 6 Washington; it beat five more top-25 teams before the end. Harvard not only defeated two-time defending Ivy champ Penn, but also won all six singles matches despite falling behind in the first sets in three of them. And when an NCAA Sweet 16 berth rested on the No. 1 match between sophomore Courtney Bergman and the fifth-ranked player in the nation, Arizona’s Emilie Scribot, Bergman won.

It’s no wonder that when a 4-0 defeat to two-time defending NCAA champion Stanford finally brought the season to an end, Bergman felt Harvard could have won all three singles matches that were not played to completion. Hers was against Amber Liu—the eventual NCAA singles champion.

Harvard coach Gordon Graham says the case could be made that this is the best team in the history of the program. The Crimson (21-5, 19-4 spring, 7-0 Ivy) won more matches and beat more top-25 teams than any team in school history. The end-of-year ranking of No. 14 was also a record.

“It sucks that we had to end on a losing note, but we had the greatest season ever. We set a billion Harvard records,” said captain Sanja Bajin, who rewrote the record books herself with an undefeated regular season, playing primarily at No. 5.

The team was exciting not just because it won but because of how it won.

The 6-1 comeback victory in the Penn match that clinched the Ivy championship proved to be the culmination of Harvard’s efforts throughout the spring. Because the Quakers had won the doubles point and three of six first sets in the singles matches, the Crimson appeared headed for defeat. One difference-maker was Wang, who trailed 7-6, 5-0, 40-15 but came back to win, preventing the second Penn point from ever appearing on the scoreboard.

Bajin sealed the win by taking her match, appropriately, on Senior Day.

“There was great energy out here, not just from the players, but the fans,” Graham said. “This is a group of real fighters and they just weren’t going to give up.”

A straight-set victory by Bergman at No. 1 against Penn’s Alice Pirsu—an NCAA singles quarterfinalist—was the difference in killing the Quakers’ momentum. Bergman’s easy victory was surprising because she had struggled with injuries for most of the spring.

“A couple other people were saying when they looked over and saw that I won, it gave them more energy and confidence,” Bergman said. “That’s awesome if it did that. I know it’s easier for me to play when I know how good our team is and how good the back of the lineup is.”

For the year, Harvard’s No. 4 through No. 6 players—Wang, Bajin and freshman Melissa Anderson—lost just six matches.

Bergman’s best show was yet to come against No. 16 seed Arizona in the second round of the NCAA tournament, which Harvard hosted for the first time. The day started rosily for the Crimson, which earned the doubles point when Bergman and sophomore Susanna Lingman posted a dominant 8-3 victory at No. 1 and Wang and Anderson pulled off a stunning comeback from a 4-0 deficit to win 8-6 at No. 3.

Luck was not going Harvard’s way in singles, however. Lingman fell to the Wildcats’ talented No. 2 player, ranked 29th nationally, while Bajin struggled with a back injury and lost at No. 5 for the first time all spring. Martire, unbeknownst to the team, was struggling with tonsillitis at No. 3.

That left no margin for error, but Wang and Anderson’s victories at No. 4 and No. 6, respectively, showcased Harvard’s depth. To advance to the Sweet 16, Harvard needed to add to that its strength at the top. All eyes turned to the No. 1 court where Bergman was beginning the third set against Scribot.

“I saw everyone on the bleachers come over to my court and I was like, ‘Oh, my gosh’,” Bergman said. “For such a big thing to go to Gainesville, I just felt so much pressure.”

With the home crowd cheering every point, Bergman played mistake-free tennis while Scribot crumbled, hitting shot after shot into the net.

“[Scribot] had all the shots, but she didn’t have Courtney’s toughness—that’s what it really came down to,” Graham said. “She had a great game, but there’s more to it than the shots. It’s the mental toughness. Bergman’s got that over anyone practically.”

Bergman’s greatest success came when her team needed her the most, but she was not as successful in individual tournaments. She lost in the first round of the NCAA singles tournament in May after straining a muscle in her forearm on the third point of her match.

Her greatest individual success came when she reached the Round of 16 at the OmniHotels/ITA National Intercollegiate Indoor Championships in the fall.

The fall season, which is primarily dominated by individual tournaments, gave some forewarning that the spring would be special. Two of the greatest success stories were Martire’s second-place finish in the OmniHotels Eastern Region Championships and Wang’s run through the consolation bracket of the Riviera/ITA Women’s All-American Championships in which she beat a player now ranked 15th in the nation.

The only downside of the fall was that so many Crimson players went deep into the All-American tournament that the team could not field a full roster to defend its ECAC indoor championship against Yale. But Harvard would get to avenge that defeat handily in the spring.

Bajin and classmate Liz Gass were the team’s only juniors or seniors, meaning that five of the mainstays in the Crimson lineup this season could be playing for the next two years, and the team could attain an even higher level of achievement next season.

“We’ll be more settled next time for [the NCAA tournament], even more prepared,” Bergman said. “This gave us a taste of it. It’ll make us train harder and want it a little more.”

HIGHLIGHTS Team sets school records with 21 victories and No. 14 end-of-year national ranking. Courtney Bergman upsets the nation’s fifth-ranked player to advance Harvard to the NCAA Round of 16.