Students-Turned-Teachers Help Middle Schoolers Get Ahead in School 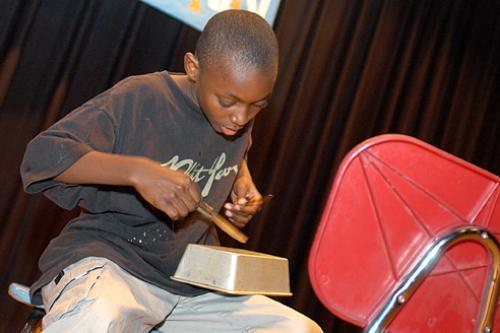 A miserable midsummer storm—gray, hot and humid—presses against the windows of the Tobin Elementary School cafeteria as students weave through the tables, unwrapping breakfast muffins and small containers of juice as they slide into their seats.

Suddenly the students sitting around one table beat a rhythm in unison on its surface.

“We’ve got spirit, yes we do! We’ve got spirit—how ’bout you?” they shout in chorus, pointing at a neighboring table on the snap of the last syllable. The commotion has turned nearly every head in the room, and now without an instant’s hesitation the neighboring students repeat the chant, their fingers pointing in a new direction.

The chanting continues until conversation subsumes it again. A burst of cheering from the school’s main entrance upstairs heralds the arrival of a new middle-schooler.

It is Tuesday morning at Summerbridge Cambridge, a local program offering 88 middle-school students at local public schools opportunities to develop academic skills under the tutelage of 42 high school and college students.

The summer program, which runs from late June through mid-August, is part of a two-year curriculum combining intensive summer courses with term-time classes in literature, social studies, mathematics and science. The program is funded by a combination of private donation and federal support, so students can enroll for free.

Held at two Cambridge sites, the program aims to introduce middle-school students to the sort of academic environment they will find in high school, says Program Director Hilary Mead.

Five Harvard undergraduates are among those teaching at the Tobin Elementary site.

Sarah R. Maxwell ’06, who teaches a four-person class on forensic science, says she spent the first weekend of the program doing nothing but planning her classes for the next week, she says.

“The intensity is kind of what’s fun,” she says.

“In college lectures you’re mostly going to sit and listen for an hour,” she says. “These kids don’t do that. They want to figure things out for themselves. They’re concrete thinkers.”

Getting In and Getting Ready

Classes in the summer program are held in different rooms of the Tobin building—even though most middle school students take all their classes in a single room—to help students grow accustomed to movement between classes, she explains.

But the program isn’t only focused on secondary education. Summerbridge also strives to put its students on the path to college, she says—beginning with their application to the program.

Each year, representatives from the Summerbridge program visit every fifth-grade classroom in Cambridge to extend invitations to the program. This past year, 14 percent of Cambridge middle schoolers completed the application process, which included a written component and an interview.

For the 10 percent of Cambridge students admitted to the program, Mead says, applying becomes “a piece of cultural capital,” building their confidence for similar applications to high school or college.

But for those who want to teach with the program, the application process is more competitive still.

Both peers and professional educators observe a student teacher’s class each week and offer constructive evaluations. At the end of the summer, the student teachers prepare special portfolios and write “philosophy of education” statements.

The teachers say this constant feedback—combined with the daunting prospect of facing a classroom full of students every morning—makes Summerbridge an experience with an acute learning curve.

Josh Billings ’07—who planned to spend the summer in Tibet—says his experience so far has been an engaging substitute for global travel.

“I don’t know if I could be learning more if I were on a mountain halfway around the world,” he says.

As the breakfast period ends, the “Mission: Impossible” theme suddenly rattles from a boombox and two teachers race across the cafeteria in tight black clothing and sinister sunglasses.

A “Mission: Impossible” theme will be reiterated throughout the week, explains literature teacher Claire A. Pasternack ’05, who is also a Crimson editor.

Summerbridge students take four classes each morning, but the order of the courses varies through the week. A mid-morning snack affords student and their teachers a break from the classroom and an opportunity to meet in their “clusters”—teams of about 20 students that are the basis for some of the program’s activities.

Toward the end of the morning, Billings teaches a mathematics class.

He asks a few of his students to diagram bacteria replication on the blackboard. “What do we call that?” he asks

Another twitches excitedly in his chair, then blurts out his realization that the number one raised to any positive power is equal to itself. He slams his hand on his desk.

“I rest my case,” he says, and nods briskly.

During the second half of the class, Billings leads his students to a ten-foot strip of paper extending across the floor. Together—some students making calculations on the boards, others measuring lengths on the paper—the students transform the strip into a line of numbers and their squares. They will have to raise points on the number line to their third and fourth powers for homework.

Billings shows his students how to use the line to estimate unknown square roots as a handheld bell rattles through the hallway, heralding the beginning of the 50-minute lunch period.

Students crowd around the lunch tables, usually joined by one or two teachers. The student-to-faculty ratio at Summerbridge is a little over two to one, and each teacher serves as an adviser to two students.

“Attitude check!” one of the teachers cries. A rhythm beat on the tabletops begins immediately and grows as more students join. When it ceases, the room is quiet.

But only for an instant. Soon, the “Mission: Impossible” theme cleaves the silence once more and the two black-clad figures who appeared earlier begin throwing toilet-paper streamers from the balcony.

When the diversion ends, students and their teachers return to the meal before them: sandwiches, apples and juice—a unenticing combination they know as “federal food” because the program receives the meals gratis from the federal government.

The program receives about 10 percent of its funding from the government and 60 percent from foundations. The remaining funding comes mainly from corporations and private donors.

This summer, Harvard donated two apartments in Peabody Terrace to provide lodging for student teachers visiting Cambridge from outside the area.

Two alums of the College, Angela L. Duckworth ’92 and Philip King ’92, founded Summerbridge Cambridge in 1992 to bring the Summerbridge programs that existed elsewhere in the nation to Cambridge.

But from the start, Summerbridge Cambridge was different from many of its peer programs, says Executive Director Sheilah Kavaney.

Rather than serving the population of private schools, as most comparable programs had done, Summerbridge Cambridge targeted students in Cambridge public schools.

“We’re not here to take kids out of the private sector,” Kavaney says.

This goal of enriching public education has not waned over time, she says—particularly given the ongoing problems of the ailing Cambridge public school system, which despite high levels of funding fields some of the worst test scores in the state.

The debate over what to do with Cambridge’s schools has become one of the hottest topics in city politics, particularly this year when the Cambridge School Committee passed a controversial plan to consolidate several elementary schools.

Kavaney says keeping people aware of the program through the controversy has been hard.

Satisfying public demands for higher test scores while avoiding “teaching to the test,” will be a challenge for the program and its instructors, she says, but one Summerbridge will surely have to face in the coming years.

When lunch ends, students and their teachers take seats in the auditorium for “community meeting,” a daily afternoon assembly during which students gather to discuss news within the program and to share their talents.

A series of groups have prepared presentations to kick off the afternoon. The Summerbridge math department presents a Captain Math skit.

“Captain Math, he’s our hero—gonna take confusion down to zero!” they chant together as one of the teachers struts across the stage in a red cape.

“Remember,” the superhero intones in a dramatic baritone, fists resting on his hips, “math is yours.”

Next, a pair of students present a poster they have made, an image of the American flag with collages of the nation’s “pros” and “cons” fitted among the red stripes.

Another student beats an intricate sequence of fleeting rhythms on three pots and pans. His toes bounce up and down as he plays, and he shifts the arrangement of the impromptu instruments to create new timbres. The audience cheers.

Pasternack and another teacher, dressed in costume hats, colorful sunglasses and oversized T-shirts, hold the stage as Spirit Girl and Spirit Boy and present the day’s Spirit Awards to two girls who had distinguished themselves in the classroom.

A skit performed by members of the teaching staff urges students to garner sponsors for the annual Summerbridge Walk-a-thon. The four “clusters” compete against each other, each aiming to bring $1,000 into the program.

The afternoon winds down with an “explorations” class—during which students pursue one of several non-academic offerings, such as public speaking or visual art—and a 50-minute “homework hut,” where they begin their two hours of nightly homework under their teachers’ supervision, allowing them pose questions lingering from the day’s classes.

After meeting in their clusters one last time to discuss, in whispered tones, their strategies for winning the Walk-a-thon competition, the students leave for the afternoon, allowing their teachers to hold their daily staff meeting.

Conversation in the circle of high school and college students turns to logistics, the week’s strengths and weaknesses, and specific problems that some students have encountered. By 6 p.m., the staff heads home, into the wet evening, to recover from the day’s challenges and plan for the next.

“In a city where so many are getting a liberal arts education, it’s a question of where is the practical application,” Kavaney says. In spite of Cambridge’s overall affluence and educational accomplishment, a number of public school students still do not attend college, she says.

“As long as that isn’t happening, we need to be here,” she says.