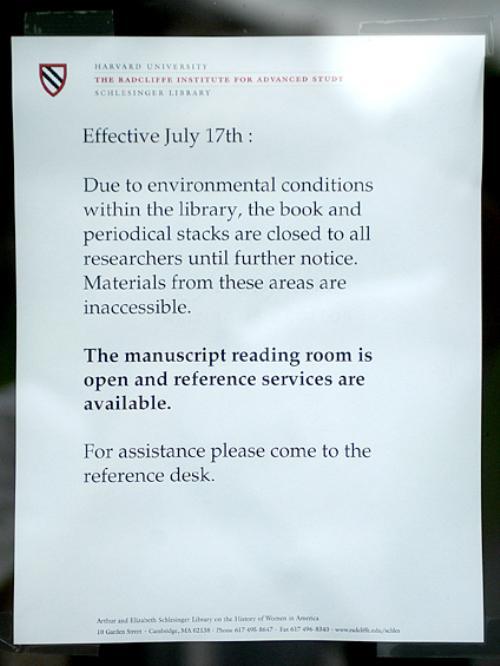 A sign on Schlesinger door tells visitors of the library's close.
By The CRIMSON Staff

“A very slight mold has developed on our books,” said Megan Sniffin-Marinoff, the library’s deputy director, who added that the mold was not dangerous or toxic. “[It’s] just the same as you would find in any basement or attic.”

The humid summers typical in the northeast partially cause this problem, according to Sniffin-Marinoff.

“[I] wouldn’t be surprised if this were the case at many other libraries in New England,” she said.

Ventilation systems get overloaded by the humidity and cannot keep up, resulting in perfect conditions for the growth of bacteria and mold.

Since last week, the third floor has been closed, inconveniencing Harvard students and other researchers. Unlike many Harvard libraries, Schlesinger is open to all visitors.

On Tuesday morning, Lavina Shankar, an associate professor at Bates College, took a long drive from Maine to Cambridge to use the facility, only to find the primary research materials and periodicals room closed.

Shankar called the closure “extremely unexpected and unfortunate,” and said it might “hamper [her] research.”

Sniffin-Marinoff said they expected to reopen the third floor by late August, but that she “would not be surprised if it reopens earlier.” Until then, she said most of the materials on the third floor are not rare and can be found in other campus libraries.

There is no lasting damage to any of the books, according to Sniffin-Marinoff, and only 5 percent of the books are actually affected by the mold. Still, some 60,000 books have been taken out of circulation while the problem is rectified.

The library staff has already begun to rectify the problem by temporarily installing four large dehumidifiers on the third floor. A renovation planned for the near future will include the permanent installation of a new, more advanced ventilation system designed to prevent these conditions from developing. The air conditioning has also been turned up substantially to slow the growth of the mold.