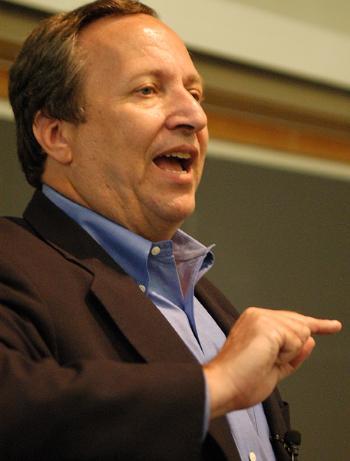 The address, which explored both changes in the global economy and the responsibility of education in a world of technological innovation and international communication, forms the centerpiece of this week’s Institute for English Language (IEL), an intensive program offering students an opportunity to learn and practice English at Harvard.

Christopher Queen, Summer School dean of students, said that Summers’ status as an educational leader and international economist would make his thoughts particularly intriguing to young scholars from around the world. More than 1,000 foreign students are enrolled in Harvard’s programs this summer.

Citing different traits of the changing globe, Summers said that institutions like Harvard could lead a new era based on communication across geographic barriers.

Leaning against one corner of the podium, his collar unbuttoned, Summers recounted his amazement upon receiving a cell phone call on a small and impoverished island off the Côte d’Ivoire. The experience was reflective of a changing world, he said.

Discussing “the tremendous difference that technology and scientific developments are making in the way people live,” Summers praised the innovations that allow communication that earlier would have been impossible.

“We have come an enormous distance in connectedness,” he said.

Technology is beginning to influence even age-old traditions of scholarship, he said.

But he predicted that the next century’s dramatic innovations in methods of communication would be eclipsed by the sciences in making the most impressive changes to international life.

“We are beginning to see this in some Asian cities, where 60 percent of the babies born are boys because of the choices people have made. We are just at the beginning.”

Stepping into his economist’s shoes, Summers discussed what he thought would be a shift from the rigid production hierarchies of the past century to an economic culture that values and disseminates ideas rather than material products. That, Summers said, will make the role universities play more crucial.

“Education is going to be more important than it’s ever been before,” he said. Summers said a successful education would involve more than just teaching a selection of facts and theories.

“What I hope you will learn in your college years is this: an active and enlightened curiosity and a belief that by thinking systematically, the world can better be understood,” Summers told the assembled students, many of whom had not yet begun their undergraduate years. “And when it is better understood, it can be made better.”

Education, he emphasized, requires responsibility. He told the student that they should ultimately be concerned not with “how smart” they were, but instead “how wise.”

Strong ethical judgement—which cannot be garnered only from books—will be essential for the rising generation to ensure that technological developments are used for beneficial, rather than harmful, principles, he told the young scholars.

Most students said they were pleased at the chance to hear from the internationally recognized leader.

“It was very easy to follow—even for an international student,” joked Samito Kawano, who is enrolled in IEL’s English for the MBA program.

“It fits very well with our own mission to attract highly qualified international students to Harvard,” he said.