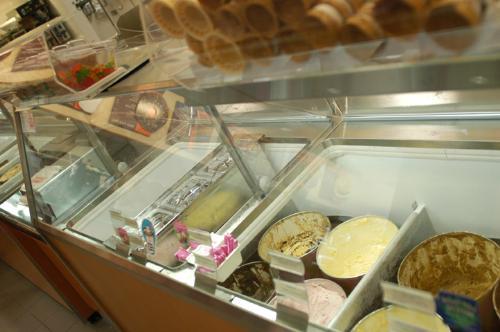 Baskin Robbins offers its 31 flavors to customers in its newly-renovated location. The ice cream vendor joins Dunkin Donuts in their return to Bow Street after a three-year absence.
By Jenifer L. Steinhardt, Crimson Staff Writer

Ben Affleck may have called off his wedding to actress and singer Jennifer Lopez yesterday, but the Dunkin’ Donuts and Baskin Robbins featured in Affleck’s movie Good Will Hunting are back together after a three-year split.

The shop made famous when Matt Damon’s character slapped a piece of paper with Minnie Driver’s character’s number on the window returned two and half weeks ago to the corner of Mass. Ave and Bow Street.

And with the reopening of the store—adjacent to its former site where the Grafton Street Pub and Grille now stands—comes a greater selection of breakfast food, a new owner and renovated facilities.

According to owner David G. Carvahlo, the new store offers “the full line” of Dunkin’ Donuts items, including breakfast sandwiches, which he said the former store lacked.

Yesterday, customers flocked to the new shop for coffee, donuts and ice cream—even though mint chocolate chip, the most popular ice cream flavor according to Carvahlo, rapidly sold out.

Carolyn A. McCandlish ’07 selected a customized ice cream cake for her friend’s birthday. The Wigglesworth resident said she was confident that because of the shop’s proximity to her dorm, the cake wouldn’t melt on the way back.

John St. George ’70-’72 sat at a table yesterday, reading over papers and sipping coffee. He said he was happy to see the return of the Dunkin’ Donuts, but disappointed to see many independent businesses disappearing from the Square.

Carvahlo, who owns 12 franchises in Massachusetts, said he grew up a child of the donut business.

The donut business even seems to be in his genes. Carvahlo said his father resembles the legendary donut makers who appear on the nationwide chain’s television commercials.

But Good Will Hunting may be all the advertising this Dunkin’ Donuts branch needs, according to Carvahlo.

The store’s minor relocation from its old site has not prevented customers from associating it with the 1998 hit movie. In it, Matt Damon’s character proudly confronts a Harvard snob through the Dunkin’ Donuts window, asking “How do you like them apples?”

“I often see people outside taking pictures of the building,” Carvahlo said. “But no one’s slammed a phone number against the window yet.”

The old shop was forced to close in September 2000 to allow for renovations to the building, owned by the Harvard Cooperative Society. The renovations eliminated the Bow and Arrow pub, also featured in the movie and long a staple of undergraduate life.