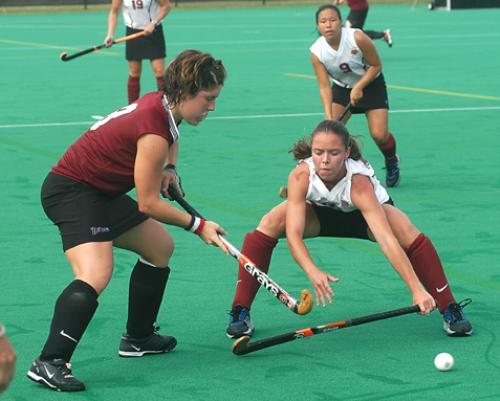 The Harvard field hockey team held the University of Massachusetts scoreless as it took a 4-0 win over the Minutewomen yesterday at Jordan Field.
By Wes Kauble, Contributing Writer

With 17 minutes left in the game, coach Sue Caples lifted senior goalkeeper Katie Zacarian to allow junior netminder Aliaa Remtillia to gain some experience, despite the fact that Zacarian was well on her way to becoming the Crimson’s all-time leader in shutouts.

Nevertheless, the Harvard field hockey team crushed Massachuetts as Zacarian and Remtillia combined for the Crimson’s first shutout of the season in the 4-0 victory.

Two members of the Crimson (3-0, 1-0 Ivy) had personal rivalries at stake in the contest. Zacarian was tending goal against sister Jackie Zacarian, a freshman for the Minutewomen (2-5), who coincidentally came in at the exact time that the elder Zacarian was taken out. Furthermore, Caples, a graduate of UMass, is always happy to bring home a victory against her alma mater.

Sophomore midfielder Jen McDavitt started off the scoring with a penalty corner slam midway through the first half. Junior forward Tiffan Egnaczyk faked a shot and tipped the ball to McDavitt who flung it to the left corner of the box. Senior back Jen Ahn also assisted on the goal with a perfect stick stop, something that has become routine for the tri-captain.

Senior forward Mina Pell added her first goal of the season with 24 minutes left in the game after receiving a beautiful assist from junior midfielder Kate Gannon. Less than 40 seconds later, Egnaczyk notched her second point of the game on a rarely-seen penalty shot. She juked right but shot left on a wonderfully executed goal that put Harvard ahead by three.

With a little more than 12 minutes left in the game, senior back Liz Andrews added yet another goal to round out the Crimson’s scoring barrage, connecting on a penalty corner. Sophomore forward Laura Werner tallied her first point of the season as she and Ahn garnered assists on the play.

Harvard dominated possession throughout the entire game and put together its first truly complete match of the season. The Crimson forced 12 penalty corners while giving up none to the Minutewomen.

“We were taking a lot of shots...from right in front. We were on attack a lot. We should have had more to show for our efforts...but if we can have a scoring percentage of 10 percent and still win, that’s okay,” Caples said.

The Harvard field hockey team next heads to College Park for a Friday meeting with Richmond before a highly anticipated showdown with No. 3 Maryland on Sunday.