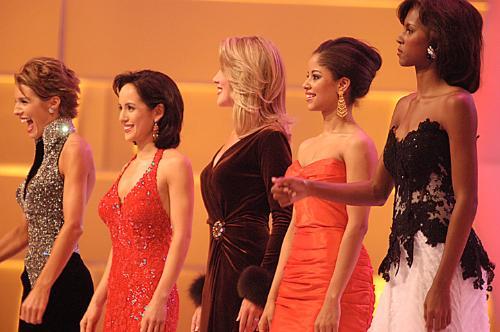 LAURIE B. GRAY '03 (second from left) and NANCY A. REDD '03 (second from right) line up to hear the top five finalists for the Miss America Competition 2003. Though they did not place among the top five, each won one of the preliminary events.
By Irin Carmon, Crimson Staff Writer

After the announcement of the pageant’s five finalists included neither Nancy A. Redd ’03 nor Laurie B. Gray ’03, the two walked offstage having netted over $20,000 each during the state and national competitions.

Competing as Miss Virginia and Miss Rhode Island, respectively, Redd and Gray were seeking to follow in the footsteps of outgoing Miss America Erika Harold, who plans to enroll in Harvard Law School (HLS) in fall 2004.

Early last week, both Redd and Gray generated buzz among pageant watchers when each garnered a preliminary prize.

Clad in a yellow bikini, Redd showed off the results of a 60-pound weight loss, emerging victorious from the Wednesday swimsuit preliminary. Gray drew raves for her violin performance, winning the talent competition for her group on Thursday night. She competed on a platform of music education.

While this is the first year that two Harvard students have competed against each other, Redd and Gray follow in a Crimson tradition of state-level victory in the last decade that includes three Miss Massachusetts contestants and a Miss North Dakota. Last year, Miss Arizona Laura M. Lawless ’00 reached the top 15, losing the crown to future HLS student Harold.

Redd and Gray’s participation in the pageant was a boon to the Miss America Organization, which in recent years has struggled to emphasize the competition’s role as a leading scholarship provider for young women, while still trying to boost the telecast’s flagging ratings.

Since the summer, Redd and Gray have appeared on “Good Morning America,” “Inside Edition,” and in numerous print publications, including the front page of the Boston Globe metro section, as a symbol of the pageant’s changing mores.

The pair arrived in Atlantic City two weeks before pageant night, spending their days making group appearances and putting the finishing touches on their sarong-twirling dance for the telecast, among other activities.

But preparation for the Miss America competition begins the moment a woman wins the state-level title, usually late spring or summer.

Before the top five were announced, Redd and Gray each had a chance to strut down the runway on national television, sporting casual wear, evening wear, and swimsuits. The Saturday show was broadcast nationally on ABC. It also featured performances by “American Idol” runner-up Clay Aiken and a “party” hosted in Colorado by “Bachelorette” stars Trista Rehn and Ryan Sutter.

When Gray won the Miss Rhode Island title in April, she was the first in the pageant’s history to sweep all three preliminary competitions. This past weekend she reportedly made Miss America history along with Miss New Hampshire Candace Glickman, by being part of the first finalist group to have two contestants from New England.

In addition to Gray’s family, numerous Harvard friends and former blockmates turned up to support her, flying in from as far as the United Kingdom.

Redd became Miss Virginia in June, after making a name for herself around the country by raking in $250,000 on the television show “Who Wants to Be A Millionaire.” She later donated a significant portion of her winnings to the 4H Club, for which she is now a national spokesperson. Redd’s platform in the Miss America pageant was “4H: The Power of YOUth.”

Shortly after appearing on “Millionaire,” Redd was named one of Glamour magazine’s top ten college women, which also recognized her co-authorship of a Princeton Review book about the gender gap in SAT scores.

According to Miss Virginia organizers, about 700 Nancy Redd fans from her hometown packed buses and braved hurricane winds to support her. Many of those that managed to make it through weather delays in time for the parade became so excited when the two high school bands from Virginia marched by, led by Nancy’s brother Sammy Redd, they joined in the march. Most wore red Miss Virginia shirts with “Redd Hott” emblazoned on the back.

“It’s always been Nancy’s impulse to reach out and communicate with people,” said Sammy Redd, regarding the high fan turnout. “She doesn’t hesitate to share herself.”

When eliminated contestants returned to the stage to hear the final winner named, hundreds of Redd supporters loyally shouted her name en masse.

—Staff writer Irin Carmon can be reached at carmon@fas.harvard.edu.