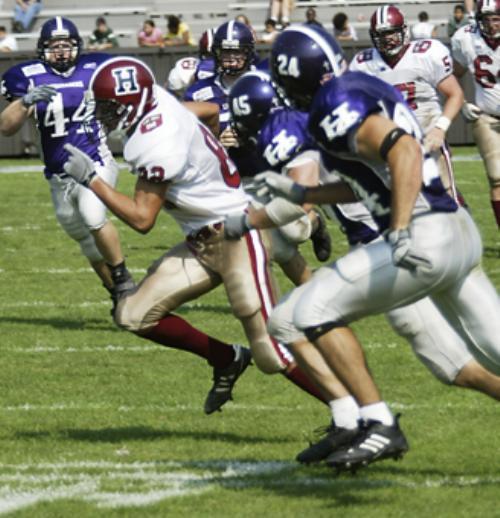 Junior wide receiver BRIAN EDWARDS (82, above) had three plays—two receptions and a punt return—go for more than 40 yards on the day, plus a 33-yard touchdown catch and established himself as a marked man for the rest of the game—and likely the season.
By Lande A. Spottswood, SPECIAL TO THE CRIMSON

WORCESTER, Mass.—On Saturday, junior wide receiver Brian Edwards saw something he may not see again for a long time—man coverage.

And boy, did he take advantage of it.

With just one defender assigned to the then-unknown Edwards, junior quarterback Ryan Fitzpatrick found his new favorite target four times for 129 yards and a touchdown—in the first quarter.

“Before the game, Coach [Tim Murphy] told us to pray for man-on-man coverage,” Edwards said, “because he knew that their corners were young and we could go deep. And then they came out in man coverage to start.”

But after a one-quarter, one-man highlight reel of spin moves and speed, the Holy Cross coaching staff had seen enough. It went to a zone.

“Early on they were playing a lot of man,” Fitzpatrick said with a grin after the game. “They got out of that as soon as they figured out who Brian Edwards was.”

Everyone figured out who Brian Edwards was Saturday. The 6’ junior finished the game with seven catches for 152 yards, one TD and a beautiful 42-yard punt return. He also finished the game No. 1 on every Harvard opponent’s radar.

Edwards entered the season unknown to almost everyone but his teammates. As a sophomore, he played well but infrequently, buried on the depth chart behind headliners like Carl Morris ’03 and then-junior Kyle Cremarosa. His career stat line before Saturday sounded more like a really good game—seven catches for 118 yards and a TD.

But during spring and preseason practice, Edwards emerged as the Crimson’s newest threat and the buzz before the game was all about him. Edwards was ready to break out and his team knew it.

“What I said privately to people—certainly not publicly—was that the name they were going to hear at the end of this game was Brian Edwards,” Murphy said.

Edwards kicked off his day with a 42-yard punt return that left onlookers slack-jawed. He sliced through a mess of defenders and beat a few more to the left sideline before being pulled down by the last man.

Two uneventful running plays later, Edwards beat his man down the sideline and caught a perfect pass from Fitzpatrick five steps in front of a pair of defenders. He could have walked into the end zone for the 33-yard TD and Harvard’s first score of the season.

“He’s the man,” said junior wide receiver Rodney Byrnes, who finished with six catches for 93 yards of his own. “He came to play.”

Then came another 47-yard catch where Edwards sidestepped one defender, shook off another and sped by two more before being tackled.

And finally—right before the end of the first quarter—came the play of the game.

After Holy Cross kicked off out of bounds, Harvard faced first-and-10 on its own 35. Fitzpatrick went to Edwards, but underthrew him. Edwards came back—past the defenders he had already beaten—caught the ball over a pair of defensive backs, spun through them and cut right. While crossing the field, Edwards absorbed a hard hit from Holy Cross cornerback Darran Davis but stayed on his feet and fought his way out of a tangle of purple jerseys before finally being brought down after a 42-yard gain.

Davis was hurt on the play and had to be taken off the field on a stretcher, but only an injury that serious could sober the excitement created by the play.

“It was one-on-one so we had to check to a deep route,” Edwards said. “The ball was a little underthrown, which turned out to be good because I had room to move upfield.”

The only thing Edwards didn’t have much room for on Saturday was improvement.

“[Edwards was] unbelievable. I think today was his coming-out party,” Fitzpatrick said. “Nobody really knew who he was. He didn’t get a lot of playing time last year or a lot of catches, but obviously today he showed he’s going to be a tremendous player for our team and for the Ivy League.”