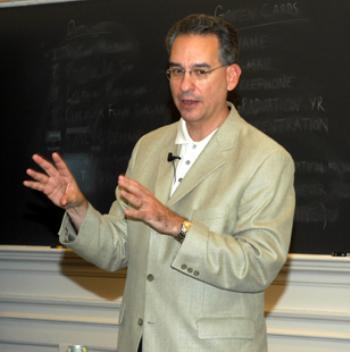 B.U. Professor RANDY E. BARNETT explains to Harvard students why he believes the Consitution protects the use of medicinal marijuana.
By Joshua P. Rogers, CONTRIBUTING WRITER

The production and use of marijuana for medicinal purposes is protected by the Constitution, a Boston University (B.U.) Law School professor argued to a group of about 50 Harvard students last night.

Professor Randy E. Barnett, a 1977 graduate of Harvard Law School, is currently engaged in a legal battle over the use of medicinal marijuana, representing a group of California residents who say that they use marijuana for medicinal purposes.

The residents, who call themselves the Oakland Cannabis Buyers’ Cooperative, are currently defending their case in federal court.

Although federal statutes ban the manufacture and distribution of the drug, a 1996 California law approved marijuana where medical circumstances warranted it.

Barnett outlined the three main points of his case to the assembled crowd of Harvard undergraduates and law school students.

Barnett argued in his first point that the scope of Congressional power was strictly limited in Article I of the Constitution.

“There is a list of things Congress is supposed to do, and anything outside of that is not within Congress’s powers,” Barnett said, referring to the words “herein granted” in the first section of Article I as justification for limiting Congress’ power.

Barnett said that cannabis produced and distributed wholly within a state falls outside of the jurisdiction of Congress, because the Constitution specifically limits Congress to regulating interstate commerce.

“The one thing not on that list is commerce wholly within the state,” he said.

Barnett said that because his clients use cannabis that is cultivated, sold and consumed entirely within California, they should be regulated only by that state.

Barnett also said that the Supreme Court has ruled that intrastate commerce that affects interstate commerce also falls under Congressional jurisdiction, but he argued that the current case in California does not meet this criteria because of the small number of people involved in the Oakland cooperative.

Barnett’s second point also dealt with the powers delegated to the states and the federal government in the Constitution.

He referred to the Tenth Amendment, which reserves all powers not enumerated in the Constitution for the state governments.

“The Congress does not have a general police power,” Barnett said. “The states have the police power.”

Barnett said that because California and the City of Oakland have approved the use of marijuana for medicinal purposes—and because his clients had the proper medical documentation—their activities were entirely legal.

In his third and final argument, Barnett said it was a fundamental right of a citizen to avoid suffering and seek medical treatment. The use of cannabis to address the suffering of ill individuals should fall within that definition, he said.

Barnett’s case has been bounced around the federal courts over the past five years. Although the Ninth Circuit Court originally ruled in favor of the Oakland cooperative, this decision was later reversed by the Supreme Court.

The case was then returned to a lower court.

Barnett predicted to last night’s audience that his clients would lose their case, saying that the lower courts would be unlikely to challenge the Supreme Court’s earlier reversal.

Last night’s event was sponsored by the Harvard Libertarian Society and the Harvard Federalist Society.