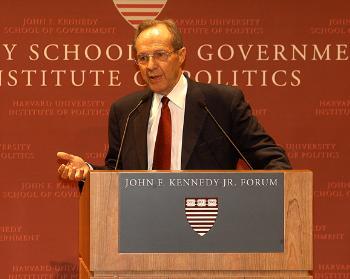 “Unless this tide is stemmed, within the next decade nuclear bombs will be used in regional wars and against U.S. cities,” Perry said.

Perry pointed to the need for a greater focus on non-proliferation, highlighted security soft spots and suggested alternatives to preemption during the 45-minute public address at the newly rededicated JFK Jr. Forum at the Kennedy School of Government.

Perry, who served as defense secretary under President Clinton from 1994 to 1997, criticized the Bush administration’s national security policy as not living up to its rhetoric.

“[Bush] pledged to keep a steady pace in improving national security,” Perry said. “The National Security Plan put in place since 9/11 does not reflect that.”

Specifically, Perry cited the need to protect what he described as one of the more vulnerable links in the nation’s security infrastructure—shipping and freight.

“Securing ports and freight should be the number one priority,” Perry said, noting however, that the task is a difficult one.

“Military preemption must be a part of the U.S. arsenal, but only when danger is grave and imminent, or else it will result in unexpected casualties, costs, and consequences, as have seen in Iraq,” Perry said.

Instead, Perry argued, “our first line of defense should be preventing the spread of weapons of mass destruction.”

Perry, now a Stanford professor and co-chair of the Harvard-Stanford Preventative Defense Project, said the U.S. needs “new tools to deal with new times.” He stressed the need for full compliance with the Nunn-Lugar Act, which encourages the dismantling of weapons of mass destruction.

According to Perry, Russia has not fully complied with Nunn-Lugar, “especially in the areas of biological and chemical weapons.”

Perry cited the international Non-Proliferation Treaty as another important tool. The U.S. should work to close loopholes, he said, which currently allow North Korea and Iran to manufacture weapons in civilian nuclear plants.

Perry admitted that inspections and non-proliferation won’t always be enough, and that “sometimes a stronger approach may be needed.”

But he advocated an international approach because, “even though we can be victorious when acting unilaterally in military conflicts, we cannot stop proliferation unilaterally.”

Following his speech, Perry fielded about a dozen questions touching on a variety of topics.

One Kennedy School of Government student asked Perry whether he thought ties between the government and the defense and energy industries were dangerous.

“[The] defense industry has far less of an influence today than it did during President Eisenhower’s administration,” Perry responded.

Another student asked Perry how Democrats should respond to Republican dominance of national security as a campaign issues.

“If what he said was true, we live in a dangerous world,” he said.