Overwhelming majority of students have felt depressed in last year 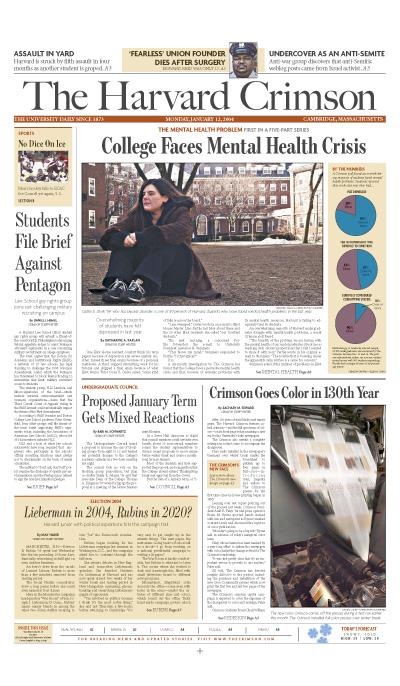 Caitlin E. Stork ’04, who has bipolar disorder, is one of 80 percent of Harvard students who have faced mental health problems in the last year.
By Katharine A. Kaplan, Crimson Staff Writer

One Eliot House resident couldn’t finish his term papers because of depression and severe anxiety. Another missed three final exams because of a personal meltdown. A third stopped submitting work for his tutorial and skipped a final exam because of what Eliot Senior Tutor Oona B. Ceder called, “some kind of failure across the board.”

“I am swamped,” Ceder wrote in an e-mail to Eliot House Master Lino Pertile last May about these and the 20 other Eliot residents she called “our troubled students.”

The next morning, a concerned Pertile forwarded the e-mail to University President Lawrence H. Summers.

“This blows my mind,” Summers responded to Pertile. “Is this typical?”

A six-month investigation by The Crimson has found that the College faces a pervasive mental health crisis and that, because of systemic problems with its mental health resources, Harvard is failing to adequately treat its students.

“The breadth of the problem we are having with the mental health of our undergraduates struck me as reaching such serious proportions that I felt I wanted to share it with you,” Pertile wrote in his original e-mail to Summers. “The trouble that is brewing under the apparently calm surface is a cause for concern.”

Summers asked if the number of problems in Eliot House was unusual.

“Matters do seem to be worse this year,” Pertile wrote back in the e-mail exchange obtained by The Crimson. “We do not think that Eliot House is untypical.”

Dean of the Faculty William C. Kirby asked then-Dean of the College Harry R. Lewis ’68 if the volume of cases in Eliot House was out of the ordinary.

Lewis, who served as dean for eight years, responded that the situation was typical.

“I don’t have much sense that this year is abnormal,” Lewis wrote.

When contacted this weekend, these administrators declined to comment further about the situation in Eliot last spring. Kirby could not be reached for comment last night.

The Crimson poll found that 80 percent of undergraduates felt depressed at least once last year. Forty-seven percent felt so depressed it was difficult to function at least once. Ten percent said they had seriously considered committing suicide.

The poll surveyed a random sample of Harvard College students over a four-day period in December; 361 students responded to the poll, which was administered online via a secure, authenticated server. Statistics had a margin of error of plus or minus six percentage points.

“We must admit as a University that we have a problem,” says Hilary C. Robinson ’03, a first-year student at Harvard Law School who went to University Health Services (UHS) Mental Health Service this fall and says she was shocked to learn how overburdened UHS is with students seeking therapy.

Undergraduates have started to realize how common mental illness is at the College, according to Director of UHS Mental Health Service Dr. Richard D. Kadison.

“Harvard students are getting better at realizing that mental health problems here are normal,” he says.

But a 2003 graduate of the College who suffered from a severe anxiety disorder while at Harvard says most students don’t realize that even those who appear to be thriving could be suffering from mental illness.

“I’m not someone you would look at and think, ‘That girl is crazy,’” says the graduate, who asked that her name not be used.

Even close friends, she says, didn’t know that she was sick.

“Inside, I was feeling like I was going to choke, or pass out, or die,” she says.

She shopped dozens of classes, frequently burst into tears for no apparent reason and sometimes slept in her closet because “it felt safe.”

She saw several UHS clinicians, tried half a dozen medications and took two months off from school to try to cope with her severe anxiety.

By her junior year, she was a self-described “pill popper” and visited a UHS-affiliated clinician three times per week.

“I was a straight-A student at Harvard who was insane,” she says.

Marian H. Smith, a member of the Class of 2004, was only 19 when she committed suicide in her Winthrop House dorm room last fall.

A strong presence in the Harvard social scene who was known for her sense of style, Smith was the last person many would have expected to take her life.

Melissa M. Lo ’04, one of her roommates, said Smith seemed happy with her classes when they spoke in a routine conversation about the weather the night before her death.

“She seemed to be fine,” Lo said shortly after Smith’s death. “I think she was listening to music, and it seemed upbeat.”

Mental health advocates say that many students do not recognize that mental illness probably affects someone in their life.

“If it’s not you, it’s your roommate, your boyfriend or girlfriend, your teammate,” says Jeremy R. Jenkins ’97-’98, a co-founder of the Mental Health Advocacy and Awareness Group who has suffered from serious depression. “It can be dealt with, but not if it’s hidden.”

“People are dying over this,” says Jenkins.

At least 15 Harvard students have committed suicide in the past 10 years. Eight of them were undergraduates.

One percent of undergraduates have attempted to commit suicide in the past year, according to the recent Crimson poll.

But exact numbers about how many Harvard students attempt to commit suicide every year are unavailable from the University.

The Harvard University Police Department (HUPD) has responded to 14 attempted suicides since 2000, according to HUPD Spokesperson Steven G. Catalano.

UHS does not calculate exact numbers, Kadison says, because it is difficult to determine what constitutes a suicide attempt.

“There are many hospitalizations, often because students are feeling suicidal,” he says. “Where do you draw the line? If they’re cutting themselves? Drinking to a certain point? Taking four Tylenol?”

Harvard’s mental health services have been in high demand in recent years.

And about 650 undergraduates received therapy from the Bureau of Study Counsel last year, according to Director Charles P. Ducey.

The immense demand has forced the bureau—a center founded to help students adjust to college life—to morph into a nearly full-time mental health center with 13 clinicians.

In interviews for this series, 24 students who have sought mental health treatment at Harvard described a confusing and hit-or-miss system that often failed to improve their situations.

• The high cost of trying to provide comprehensive mental health coverage to students has led Harvard to create an assembly-line approach to therapy. Students are quickly ushered in, and sometimes nudged out, of getting care. Some patients are cared for by multiple clinicians who do not communicate with each other—allowing some students’ conditions to spiral out of control as they fall between the cracks of the system.

• The decentralization of Harvard’s mental health services has led many students to get lost in the system. Unlike most universities, Harvard’s system is split between UHS and the bureau. Few students, however, know about the bureau’s therapy resources because of its heavily publicized focus on academic help.

• Mental health awareness education for residential tutors has recently been increased, but some residential tutors—supposedly the first line of defense for students with mental health problems—are failing to properly advise on how to get help. Professors and teaching fellows, the other officials closest to students, receive little to no training on how to help mentally ill students. As a result, some students do not get the mental health care that they need when they need it.

• Students with the most severe mental health problems need the most help, but some of these students feel that administrators simply try to push them off campus. When confronted with their severe mental health problems, students say some residential advisors seemed to encourage them to take time off over navigating the University’s mental health resources. At a time when colleges are confronting murky liability issues, some student critics say it’s because Harvard doesn’t want suicide on its hands.

Each of these issues will be addressed in the following four parts of this series.

Dean of the College Benedict H. Gross ’71 has said improving mental health services is one of his top priorities in his first year on the job.

But two University committees over the past five years have also tried to improve mental health services—and some of their recommendations have yet to be put into place.

Some student mental health advocates are skeptical that the committee will effect change to the system where the two earlier committees have failed.

But Hyman says the need for the new task force comes from an increase in student demand for help, not from any past failures.

“What’s happened is prevalence of mental disorders on campus has continued to grow, and it’s basically swamped the efforts that were made,” says Hyman, the former director of the National Institute of Mental Health.

He hypothesizes that the high pressure students face before arriving at college, an increase in the number of admitted students with mental health problems and a national destigmatization of therapy are causing more students to seek mental health care.

About 39 percent of college students nationwide reported feeling so depressed it was difficult to function at least once in the previous year, according to a survey conducted by the American College Health Association last spring.

Roughly 19,000 students from 33 colleges participated in that survey.

While many colleges currently face similar problems, students and leading mental health experts say there is no reason why Harvard should not be able to better cope with the increased need.

“You have many of the best people,” says Dr. Clarice J. Kestenbaum, former president of the American Academy of Child and Adolescent Psychiatry, who says she knows many of those involved with mental health care at Harvard.

“These things should not be that difficult to address,” she says. “You would think at Harvard there would be the best effort to have the best system possible.”

—Anne K. Kofol contributed to the reporting of this story.

—Staff writer Katharine A. Kaplan can be reached at kkaplan@fas.harvard.edu.