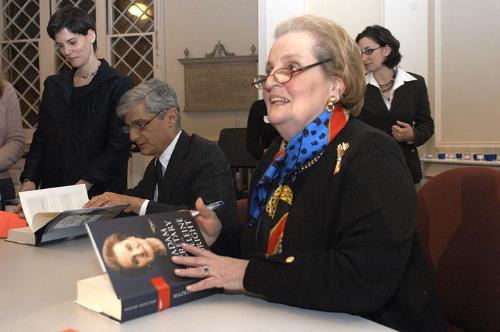 In an event sponsored by the Harvard Bookstore, former National Public Radio host Christopher Lydon grilled Albright and Rubin on their tenures, setting the evening’s critical tone by asking the former Clinton cabinet members how to get the government back on track.

“This is a very unusual doubleheader from a time when we all lived in a normal America,” Lydon said. “Tell us how good it was and how to get back to where we were.”

The two were on hand to sign copies of their books, Madam Secretary: A Memoir and In an Uncertain World and Tough Choices from Wall Street to Washington, both released last fall.

Rubin joined Clinton’s Economic Council in 1993 and was sworn in as Secretary of the Treasury in 1995. Now the chairman of Citigroup, he returned to the private sector and serves as a member of the Harvard Board of Overseers.

Albright, who emigrated to America at age eight from the former Czechoslovakia, first served as the United States’ ambassador to the United Nations before she became Secretary of State in 1997, making her the highest ranked female in the history of American government.

Only a week before the Iowa Caucus, neither Albright nor Rubin chose to endorse any of the Democratic primary candidates, but instead detailed the failures of the current administration and the successes of their own.

“We are on the wrong track in every part of U.S. economic policy,” he said. “There is a high probability for a type of crisis we haven’t seen in a long time.”

Having orchestrated U.S. support to crisis economies such as Mexico, Thailand and Russia during his tenure, Rubin said that good fiscal policy depended on “calculated risks” and “fiscal responsibility,” neither of which the current administration has demonstrated.

While citing herself as an “activist” administrator, she said that in calculating any move the government must always play their diplomatic cards first.

“If the U.S. doesn’t do something things don’t happen, but that doesn’t mean that you do it alone,” she said.

Albright added that terrorism cannot be combated alone and since Bush has “squandered our surplus of good will” abroad, tracking terrorist networks and funds will become increasingly difficult.

In addition to policy issues, both speakers ruminated on the fate of the Democratic Party and status of national leadership.

In response to a question about the balance of power in Washington, Rubin commented that liberals cannot compete with the neo-conservative think tanks and the disciplined infrastructure of Washington conservatives.

“If you ask questions, you are accused of being unpatriotic,” she said. “[They have] lost their minds.”

She did, however, cite hope in Democratic voters who seemed to be mobilizing for this election, calling it a testament to the fact that individual citizens do and can hold their government accountable.

“Our charm is that we are undisciplined,” she said.

And while both former cabinet members detailed a variety of differences between their administrations and Washington today, they returned to one the most.

“We worked for a president who told us what books to read and had read them,” Albright said.

Championing Clinton’s scholarly instincts, she and Rubin agreed that a president must intellectually engage with issues in a way they said Bush has not.

In an anecdote resonating with the Harvard Square audience, Rubin recalled a meeting between Clinton, himself and University President Lawrence H. Summers. Then-deputy secretary of the treasury under Rubin, Summers had been put in his place by Clinton’s knowledge of a recent book on economics.

“I love Larry but he is not a model of humility,” Rubin said citing his surprise that Summers had been so humbled.

At the end of the evening members of the audience said they had appreciated not only the depth of the evening’s discussion, but also the honesty of the speakers.

Jane Rhee ’04, who worked as a intern for Albright two summers ago, said that she found the informal setting refreshing.

“They had to be non-partisan in office, but since time has passed, I like the frankness, which you don’t often hear from a public figure,” she said.

—Staff writer Jessica E. Vascellaro can be reached at vascell@fas.harvard.edu.