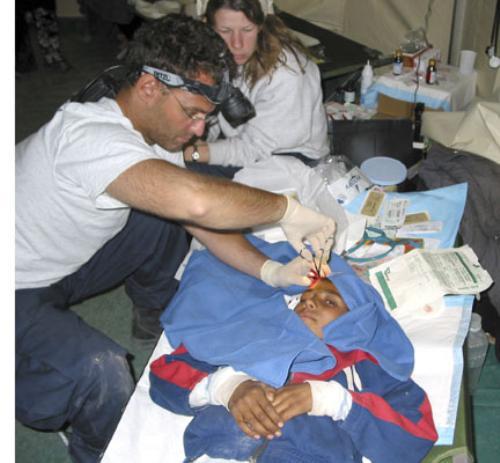 HMS faculty member and pediatrician Mark Waltzman treats a laceration on the head of a child eight days after he was injured in an earthquake which killed thousands.
By Tina Wang, Crimson Staff Writer

Around midnight on Dec. 26, Susan M. Briggs, a surgeon on the Harvard Medical School (HMS) faculty, received a telephone call from the Federal Emergency Management Agency (FEMA), a branch of the U.S. Department of Homeland Security.

An earthquake of magnitude 6.6 had just destroyed the city of Bam in Iran. Briggs and a team of doctors, more than half of whom were from HMS, assembled that morning, obtained enough equipment and supplies to set up a field hospital, and arrived in Iran on Dec. 29.

After treating 727 patients and performing eight operations in Bam, the elite team of doctors returned to Boston last week, bearing descriptions of immense suffering and of operations undertaken in the most primitive conditions.

With an official U.S. delegation by Sen. Elizabeth Dole, R-N.C., denied entry by Iran’s government, the Boston-based team was among a small group of Americans who traveled to the remote southeastern city to care for the victims of the earthquake, which killed approximately 30,000.

The team of 57 trauma surgeons, pediatricians and nurses were the first Americans to travel to Iran in an official capacity since the 1979 Islamic Revolution and hostage crisis.

“The minute [the Bam residents] heard we were there, we were mobbed,” said Annekathryn Goodman, a gynecologic oncologist at Massachusetts General Hospital and associate professor at HMS.

Many of the victims waited in cardboard boxes or tents on the street for medical treatment.

“The hospital had been destroyed, the doctors had been killed, all the resources of Bam were destroyed,” Goodman said.

As Bam’s infrastructure was leveled, the relief team had to cope with very limited resources. The team performed surgeries with bottled water and built shelves out of cardboard boxes held by duct tape.

According to Mark L. Waltzman, a pediatrician at Children’s Hospital and member of the HMS faculty, the doctors, foregoing standard testing procedures, relied on physical examination, past experience and intuition to treat patients.

“We diagnosed a couple of children with bleeding inside the skull, just based on their history and physical exams, and we managed to transport them to Tehran for surgery,” Waltzman said. “If it were here, we would have gotten CAT scans and neurosurgeons at [their] beside,” he added.

According to Waltzman, there were no fatalities at the field hospital during its time of operation.

The disaster response team, founded and headed by Briggs, had previously been deployed to lower Manhattan after the Sept. 11, 2001 attacks and to Guam after the December 2002 typhoon.

The team had been on alert for five days prior to the Iran earthquake due to the U.S. terrorism alert, according to Briggs.

The team was created in 2000 in response to the bombings of the U.S. embassies in Kenya and Tanzania. The team’s deployment to Iran was its first trip to a foreign country.

The doctors attempted to put aside the political debate surrounding the presence of American aid workers in Iran.

Security, though, was a major concern, according to Briggs.

“There were hardliners who felt that we shouldn’t be there. [Bam] is an area with a lot of drugs in the region,” Briggs said.

And in the aftermath of the earthquake, there also has been rampant looting.

Nevertheless, Goodman, Waltzman, and Briggs said they encountered no hostility from the Iranian people or government officials. The Iranian military guarded all the field hospitals in the disaster area, many of which were from other foreign countries, including the Ukraine, Denmark, China and Algeria.

“None of us worried about our safety because if we did worry about it, we wouldn’t have gone,” Waltzman said.

The medical specialists had to cope with cultural differences as well.

“You saw us with bandannas that were made from arm slings,” Briggs said. “You never had an uncovered head.”

The Iranians also found it surprising that Briggs headed the relief team because she was a woman, Briggs said.

The team had to tailor its treatment to be respectful of gender divisions as well.

“The biggest difference was that we had to segregate males and females, which was a big logistical difficulty for us,” especially in the treatment of patients with minor injuries, Briggs said. According to cultural tradition, male and female patients cannot receive care in the same area.

Moreover, none of the doctors spoke Farsi, the official language of Iran, and instead relied on the use of translators, many of whom were students from Tehran University. The language barrier proved especially difficult in cases of psychological trauma.

“We had one child who was an emotional wreck, because he kept seeing people pulling members of his family dead out of the rubble, and he was having nightmares of that,” Waltzman said. The disaster relief team was trained to provide immediate medical treatment and was not specifically prepared to provide psychological help, especially through translation.

According to Briggs, the Iranians “set up tents for psychological counseling with people who spoke the language.”

The relief work took an emotional toll on the medical team as well.

“Emotionally, it’s really hard to see that level of suffering. It’s beyond imagining. I’m not even sure how I feel about it,” said Goodman, whose trip to Iran was her first time doing relief work in a foreign country. “We’re seeing children brought in by a relative, because their entire family had been destroyed except for this one relative,” Waltzman said.

But the team’s stay in Iran also had its share of emotional triumphs. “I had one grandfather come back two days after his child was sent to Tehran for brain surgery, in tears, thanking us for saving his granddaughter’s life,” Waltzman said.

The government in Kerman also sent the team Iranian dates and pistachios as an expression of gratitude, according to Waltzman.

The Iranians were aware that the doctors were spending their New Year’s providing medical relief.

“The local people brought us some pastries and a drink to thank us for spending our holiday doing this kind of work,” Waltzman said.

After leaving Iran, the Boston-based disaster relief team donated all its supplies for a long-term hospital in Bam.