Law Students Lace Up Their Skates 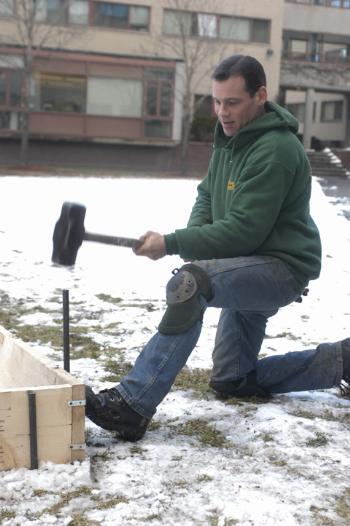 Though this week’s plummeting temperatures have driven most members of the Harvard community indoors, the Law School is giving its students a reason to brave the elements—an outdoor ice skating rink.

Dean of Harvard Law School (HLS) Elena Kagan said she decided on the spur of the moment this week to build the rink in Javis Field, an open space in front of the Law School’s student center, Harkness Commons.

“I was thinking about the renovation of the Hark, which is taking place this summer,” Kagan said. “And I saw an old article about the Hark from the 1950s. In the photo, I noticed that there were people skating in Javis Field. I thought it was a great idea.”

When Kagan began her term, she promised to make improving student life a top priority.

She said she saw this recreational addition to HLS as a step in that direction, so she decided to use money from the Law School budget to make the rink a reality.

“It’s winter. How do you make people happy?” Kagan asked.

Apparently, you build a rink.

Though HLS is still thinking about rules of access, Kagan said the rink is intended for use primarily by the Harvard community and that College students will not be turned away.

The plans for the rink have been implemented with unusual swiftness.

Kagan came up with the plan on Monday, according to Senior Facilities Manager John Holleram, and by noon Tuesday the rink was already under construction.

The rink is expected to open early next week.

“We were trying to open this weekend,” said a construction worker at the site. “Now we’re shooting for next Wednesday.”

With such short notice, many HLS students hadn’t even noticed that a construction site had sprung up in their own backyard.

Once notified about the plans, however, many were excited to hear the news.

Bloch, a second-year at HLS. “Harvard is finally spending money on something that’s just for fun.”

But others worried that the recent cold front might deter students from skating.

Next Wednesday, the prospective opening day, temperatures are expected to be in the high teens.

“Why can’t we build something warm?” said Brad Carrick, also a second-year student. “Or if it has to be cold, I think we should also build a luge and have luge lessons. And wear meat helmets.”

“Maybe we should build a hot tub,” she said.

“I think they should freeze The Hark over and we should skate inside,” suggested Bloch.

Holleram said HLS will not provide skates to students wishing to use the rink—a fact which also may inhibit would-be skaters.

“I don’t know who has ice skates with them,” Rothenberg said.

Because the plans developed so quickly, many of the details for the rink’s operation, such as its hours, are still being discussed.

Though no firm hours have been set, lights have been installed so that students who need a break from their studies can skate well into the night.

And no exact closing date has been scheduled.

According to Kagan, the rink will remain open “until it melts.”

Depending on its popularity, the construction of an ice skating rink may become an annual tradition at the Law School.

For now, HLS students are getting set to strap on their skates and practice their triple-axels.

—Staff writer Claire G. Friedman can be reached at cfriedm@fas.harvard.edu.