“I will never forget this year we shared together,” Chopra said 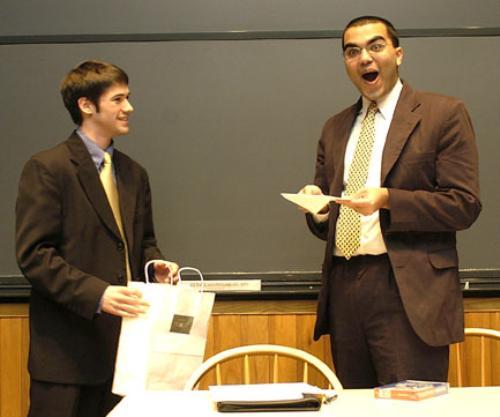 Undergraduate Council President Rohit Chopra ’04 and Vice President Jessica R. Stannard-Friel ’04 bid a tearful goodbye to the council Sunday, during the final meeting of their tenure.

Chopra unsuccessfully fought back tears as he thanked his friends and reminisced about his year battling administrators, bolstering campus social life and fighting to keep his sanity.

“I will never forget this year we shared together. Thank you for dealing with me and finally we are free,” he said.

Chopra and Stannard-Friel said they had delivered on their platform, which focused on increased council presence in students’ daily lives, better student advocacy and increased student representation.

“A year later, I can actually say we made Harvard a little more normal,” Chopra said.

Chopra cited the institution of dollar movie nights, success in planning large and small concerts, and council sponsorship of room parties, tailgates and equipment for House gyms as student life successes of the past year.

But Chopra said that his and Stannard-Friel’s tenure wasn’t just a walk in the park.

“This was a very tough year,” Chopra said.

Chopra said that the Council had to become more reactive than proactive after an administrative reshuffling, which began with the forced resignation of then-Dean of the College Harry R. Lewis ’68, who served as an unofficial advisor to the council.

“Every contact we seemed to have was dropping like flies,” Chopra said. “The Undergraduate Council was going to do a lot more reacting...stop[ping] bad things from happening instead of making good things happen.”

Chopra attributed the council’s successes in the past year to his at times adversarial, at times friendly dealings with administrators.

“It’s really something just so natural that happens,” Chopra said, about making friends with the administration. “This is how we make this whole thing work.”

Chopra said that he thought his method was summed up by a compliment he received from a Faculty Council member, who wrote in an e-mail: “Rohit, you have mastered the art of saying ‘fuck you’ with a smile.”

Chopra said that his presidency had its share of equally surprising moments.

“It didn’t turn out how I expected it to be. A lot of it was really weird,” he said.

Among the “weirder” moments, Chopra said, was a call he received from University President Lawrence H. Summers the morning after he had secured the council presidency.

Chopra joked that Summers mispronounced his name in a variety of different ways during the conversation, even after Chopra had corrected him.

“Rajeed, how are you?” Chopra said, mimicking one of Summers’ botched attempts.

Chopra and Stannard-Friel both stressed the importance of toning down arguments between council members, especially during election season.

“The best politics of all is that of being a good friend, a good neighbor and also generally being a good person without an agenda,” Chopra said.

But Chopra acknowledged that making friends wasn’t his main priority.

“I know I can be very tough to work for. I am pushy, demanding and aggressive and that’s on a good day. And I’m sorry for that at times,” Chopra said, who has in the past, been accused by other council members of micromanagment.

During the meeting, Chopra and Stannard-Friel’s friends and fellow council members thanked them profusely for their work over the past year.

“[Chopra and Stannard-Friel] are the two people that I admire more than anyone else, probably in the world,” said Sheila R. Adams ’05, who served as co-chair of the Student Affairs Committee.

Council members said that working with Chopra and Stannard-Friel had been a tremendous learning experience.

Jack P. McCambridge ’06 said that he wondered what Chopra was going to do with all of his extra free time.

“I really have no idea what you’re going to do without any mini-deans to piss off,” McCambridge said.

McCambridge also thanked Chopra for “being brave enough to tell Larry Summers, ‘This is not the right thing,’ [and] ‘to shove it.’”

Matthew W. Mahan ’05 and Michael R. Blickstead ’05 will be sworn in next month as president and vice president of the council, respectively.

Adams gave Mahan a gift certificate to Starbucks during the meeting, which she said he would have to put to use during the upcoming semester.

“I know you’re going to need the coffee,” she said.

Mahan said that he “learned a ton” from working with Chopra.

“A lot of the time I pulled him aside and asked him, ‘How are we going to do this?’” Mahan said.

—Staff writer Ebonie D. Hazle can be reached at hazle@fas.harvard.edu