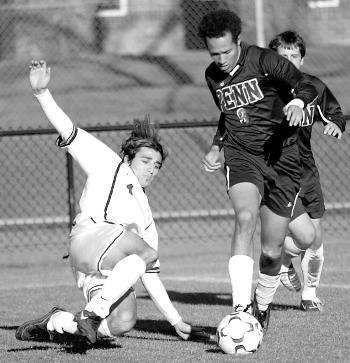 Senior midfielder Kevin Ara (4) was drafted by the D.C. United in the MLS Draft Friday. He was the top Ivy draft pick out of five in the draft, the most Ancient Eight selections in the league’s young history.
By Evan R. Johnson, Crimson Staff Writer

For the first time in six years and the third time overall, a member of the Harvard men’s soccer team has been selected in the Major League Soccer “SuperDraft,” as senior midfielder Kevin Ara was taken by D.C. United as the team’s second pick and 24th overall on Friday.

After trading its second- and third-round selections in the 2005 draft to the Kansas City Wizards for their third-round selection in this year’s draft, United chose Ara. With its initial pick, the first one of the draft, United took 14-year old sensation Freddy Adu, who is now both the league’s youngest player and highest paid with a reported $500,000-a-year contract.

“We have a very good core of players here, and we feel that Kevin has some qualities that we think will fit well into the way we play,” said United’s technical director Dave Kasper, who was also in charge of the team’s draft selections.

“I’m very lucky to have been drafted by them,” Ara said. “They are a good team and they have a good history. They have a lot of great players and I look forward to the experience.”

Ara was the first of five Ivy League players chosen, the most ever taken in the MLS draft since its debut in 1996. The previous high had been three in 1997, 2001 and 2002. The Ancient Eight was also the only conference to have at least one player taken from at least half of its member schools.

“It just shows how far the Ivy League has come and that we do actually have good players,” Ara said. “[MLS scouts] should just maybe some spend some more time looking at the Ivy League.”

The drafting of Ara at such a high position came as a surprise to many, considering that he had dropped off many scouts’ radars by the end of the year. Though a third-team All-American in 2002 and a preseason finalist this year for the Herman trophy-—soccer’s version of the Heisman—Ara was not named as one of the 15 finalists for the same award at the end of the year and was unable to garner an All-American selection after this season. United scouts did not even come to watch him play during the year.

His teammates, Kasper and Harvard coach John Kerr all point to Ara’s impressive display at the player’s combine, held earlier this month, as projecting Ara squarely into the national picture.

“He obviously did have a very good combine because you can’t go over there, play badly and get picked as high as he did,” captain Andrew Old said.

Kerr mentioned that he had explained to Ara going into the combine not to focus too hard on making a lasting impression on MLS coaches and scouts on the very first day at the risk of draining himself out for the rest of the combine. Instead, Kerr advised Ara to hold himself back a little bit, because the coaches would start to notice true talent amongst the guys who were still playing their best on the third day.

The impressive display put on at the combine helped Ara launch himself past Ivy players like Brown’s Adom Crew—the conference player of the year and a first-team All-American who was selected in the fifth round and 51st overall by the Columbus Crew—and Yale’s Jay Alberts, who is only the fifth player in conference history to garner first-team All-Ivy honors all four years and was taken in the fourth round and 47th overall by the Kansas City Wizards.

The Big Red’s Ian Pilarski was also taken in the fifth round and 59th overall by the Chicago Fire and Penn’s Matt Haefner was drafted in the sixth and 62nd overall by the Crew.

“It is very impressive,” Kerr said. “And when I say we weren’t highly ranked as a league I say that in terms of how people are thinking of us as a league.”

As for Ara, he will be entering a very interesting situation with United, where he is expected to fill in as more of a defensive midfielder. The addition of Adu will certainly give United and therefore Ara a lot more national and international attention than would initially have been expected.

While the coaches wish to protect Adu and allow him to develop his game at a relatively slow pace, fans and critics have already begun clamoring to see him play immediately in order to determine if he is truly capable of leading the United States to a World Cup title in 2006, as hoped by American soccer enthusiasts.

All of this responsibility has been placed in the hands of an untested first-year coach, Peter Nowak, a former Polish national team, German Bundesliga and MLS standout. Nowak replaces Ray Hudson—who suffered through two consecutive losing seasons—in an attempt to rejuvenate a club that won three of the first four MLS titles, but has only been to the playoffs once since 1999.

“I’m thinking I’m lucky because [Nowak is] a midfielder as well, so he can help my development too,” Ara said. “He seems like a very good guy and I’m pretty sure that he liked how I played, so I’m looking forward to it.”

“In some ways there couldn’t be a more perfect situation,” Kerr said. “The expectations won’t be quite as high because of their losing seasons the past couple of years…I think you’ll be seeing big things coming out of D.C. United in the next year or two.”

Ara certainly hopes to have more success than the other two former Crimson standouts, Will Kohler ’97 and Tom McClaughlin ’98. Both were Ivy Players of the year and were drafted in the first three rounds but only McClaughlin saw action in the MLS, and then only 29 minutes in one game.

Kerr also noted that Ara has not decided whether or not to leave school early in order to join the team’s training period which begins in February, but that such a decision is likely to come soon. Kerr said he will try to persuade Ara to finish up his requirements for graduation before pursuing his professional career.