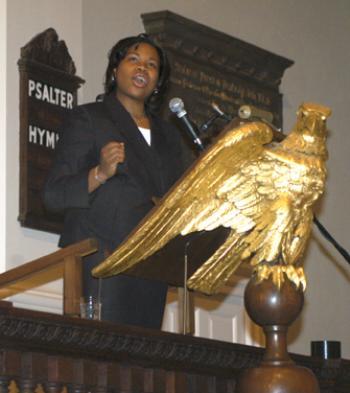 Students, faculty members, religious leaders and community members filled Memorial Church to celebrate the life of Martin Luther King Jr. and encourage each other to continue fighting for a more racially integrated society.

In addition to prayers and speeches, the service featured a dramatic reading by Jennifer N. Hawkins ’04 of King’s “I Have a Dream” speech and an appearance by the Kuumba Singers, who performed a selection of spirituals.

Gary Orfield, professor of education and social policy at the Graduate School of Education and co-director of the Civil Rights Project, told the crowd in his keynote speech, “Don’t Just Celebrate—Activate,” that King’s desegregation policies were threatened.

“Every place in the U.S., segregation is getting worse. We have deepened economic and housing polarization,” he added.

Public schools and cities across America have become increasingly divided geographically along racial lines, Orfield wrote in a study published this week.

On a day of celebration of King’s life, Orfield told the crowd that King’s legacy could best be strengthened by working to more fully integrate schools and cities.

“His victory was partial, but it is not secure, ” he said.

Orfield said King did not have the same success desegregating Chicago as he did in Birmingham and Selma earlier in his life.

“Dr. King tried to trouble you, to make you think, not just intellectually. He wanted to reach into their souls.”

Orfield also had a message for Harvard students, who he urged to interact more with students from different backgrounds.

“You are in a generation where people of color will make up the majority,” he said.

Commenting on the privilege of attending Harvard, he said, “We need to take advantage of our own diversity. There aren’t many places like this.”

Orfield described the role students played during the Civil Rights Movement of the 1960s and challenged students to write about public affairs, to live in racially mixed areas and to fight for social justice.

“Write. Your generation needs to be heard. There’s more intelligence in this room than in the Cabinet,” he said.

“Civil rights legislation would not have passed without religious support,” he said at the interfaith service.

“The keynote speech was very enlightening for the way we celebrate his birthday. I liked the way he highlighted that King was not just a dreamer but an activist,” said Keneshia D. Washington ’07.

Black Students Association President Olamipe Okunseinde ’04 invited attendees to make a pledge and then act upon it.

“Let us commit ourselves to live in a world we always dreamed about,” she said.