None hurt, but popular late-night convenience store loses over $100 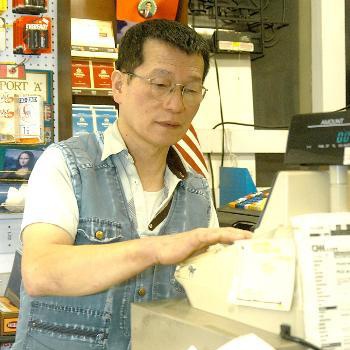 Owner of Louie’s Superette CHENG-SAN CHEN was robbed at gunpoint on Friday evening. Chen, who said he was not scared by the robbery, estimates that the alleged robber stole between $100 and $200. By David E. Stein
By Jenifer L. Steinhardt, Crimson Staff Writer

The owner of Louie’s Superette, the popular convenience store near Mather House, was robbed at gunpoint Friday night.

No one was hurt in the robbery and no arrests have been made, Cambridge Police Department spokesperson Frank D. Pasquarello said yesterday.

Cheng-San Chen, the owner of Louie’s, described the alleged suspect as a five-foot-four black male around 140 pounds and between the ages of 18 and 20, wearing a black jacket, black pants and a do-rag on his head.

Chen said the armed assailant entered the store, which was empty of customers, around 7:45 p.m. while he was restacking beer in front of the counter.

Chen said the robber, whose face was hidden by a handkerchief, then pointed the gun at him and said, “Give me all your money or I’ll shoot you.”

Chen then walked behind the counter and gave the assailant all of the 10 and 20-dollar bills in the register, he said.

“I thought he would be happy with that,” Chen said. “But then he grabbed all the money [left in the register] and ran out.”

After the robber fled up Putnam Street, Chen said he called the police, who arrived about five minutes later.

“It’s been pretty quiet at the superette area,” he said. “We haven’t had too many problems there.”

Pasquarello said he did not know how much money was stolen, but Chen estimated that he lost between $100 and $200.

Chen said he was not scared by the incident.

Chen said he even thought about fighting the robber—who, he said

wasn’t much larger in build than Chen himself.

“I was thinking...‘I think I can pit him easily—I was in the army and I know some tricks,’” Chen said. But he said he ultimately decided that it was “not worth the trouble.”

Chen said he was unsure of what additional measures, if any, he might take to better protect himself and his store.

Friends and police officers have suggested he keep a gun behind the counter, but Chen said he is worried about an accident.

“The reason I try not to have a gun [is that] I was in the army and I was very good to shoot, but now...if I have a gun and I try to shoot [a potential assailant], I may kill someone in the store,” Chen said.

The store, a small convenience store which also carries beer and wine, has been robbed several times since Chen’s family purchased it in 1987.

The incident on Friday marked the second time that Chen himself has been robbed at gunpoint while working behind the counter.

Chen said the store was robbed by an assailant carrying a gun during the 1988 Superbowl.

“My brother and I were working at the time, and he didn’t really speak English, so he couldn’t understand what was going on,” Chen told The Crimson in 1999. “I had to tell him in Chinese, ‘We’re being robbed!’”

And in December 1999, Chen was assaulted with a wooden pole and suffered a slight laceration on his right cheek during a robbery.

Another incident one Halloween, when a group of teenagers descended on the store looking for beer, left Chen with a black eye.

The store has also been robbed of merchandise several times. Roughly $2,500 in cash and beer was stolen several months after Chen took over in 1987. But Chen said that Harvard students should not be scared to continue to shop at Louie’s.

Mather House Committee secretary Darren S. Morris ’05 said he did not expect the robbery to keep students away from the store.

“I don’t think most people will be scared to go to Louie’s. I think it would be very hard to stop Mather residents in particular from going to Louie’s,” Morris said. “We even want to invite him to our senior common room.”

—Kate L. Rakoczy contributed to the reporting of this story.