Product Placement in the Crib 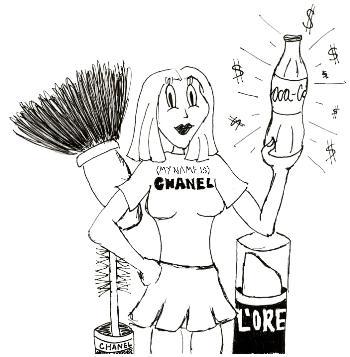 Coca-Cola culture is everywhere. Name brands have slithered into most sectors of American society, appearing on TV, radio and as subliminal advertisements in movies. Brands have even permeated the ivory walls. In 2002, Comcast signed a deal with the University of Maryland to rename its sports arena the Comcast Center. At the University of Louisville, the stadium was recently dubbed Papa John’s Cardinal Stadium.

With pizza brands buying out colleges, product placements have become ubiquitous. But for a while, they inspired few objections. Coca-Cola culture was tolerable so long as people retained a private domain without commercial breaks.

But a disturbing new trend in product placement suggests that this private domain is no longer inviolable.

In a recent study, Bellevue University psychology professor Cleveland Evans revealed that more Americans are naming their children after their favorite products. Out of the four million babies born nationwide in 2000, five girls were called Celica, almost 300 were recorded with the name Armani, and six boys were named after Courvoisier cognac. Evans argues that this trend to name children after cars, clothing and liquor stems from a desire to set them apart amid a sea of Emilys and Johns. Certainly, people like to think of themselves as individuals, and a name like Infiniti (22 entries) stands out in comparison to Kaitlyn (25,209 entries).

Yet, this trend is obviously troubling. Children named after products inevitably become associated with them; so, with a name like Chanel, a girl would easily be associated with pricey makeup. People first encountering her conspicuously chichi name quickly deem Chanel a materialist snob.

Just as some firms have historically discriminated against applicants with “black-sounding” names, who’s to say others won’t reject Chanel? Perhaps they don’t want to hire someone they suppose is conceited. Chanel, Del Monte and Infiniti become victims of commercialization. They become what they eat, wear or drive; and they are judged accordingly. Chanel’s personality, intelligence and achievements become trivial, as she is valued on factors outside of her control.

But it could be argued that even the more prevalent names like “Emily” have associations that can hinder a child’s eventual identity. There are so many Emilys out there that people are bound to have preconceived notions of what “Emily” should be like.

However, there are many valid alternatives for parents who don’t want their children to join the ranks of the 29,128 other girls named Emily in 1999. They could try “Alexia” or “Zoya.” True, these names don’t conjure up a nice little corporate song; Alexia and Zoya have to make their own songs.

Of course, commercials and product placements are a fact of life in a capitalist society. But parents must preserve the gap between products and people by opting not to name their sons something like ESPN—which, when pronounced “espen,” is the name of at least two little boys in Texas and Michigan. Instead, children should be taught to conduct their lives according to how they want to be regarded, choosing their relationships, activities and career pursuits accordingly. They must decide what to eat, wear and drive without overbearing product images helping decide for them.

—Asya Troychansky is an editorial editor.